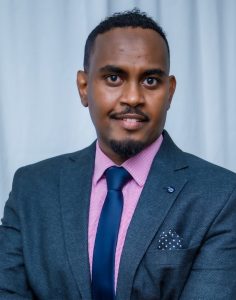 As a mental health case manager at Gateway Community Services, Yusuf Yusuf works with Portland Public School students and families, giving him insight into what holds people back from achieving their goals. “I decided to run for office and see if I can participate in changing policies because I know that policies are what matters,” Yusuf said. He is seeking the Portland School Board’s At-Large seat.

Yusuf fled from civil war in his home in Somalia, lived in Damascus, Syria, for six years, before arriving in the U.S. in 2007 and settling in Seattle, Washington. He worked, became a citizen, and earned a bachelor’s degree in sociology from Western Washington University. In 2016, he moved to Maine. “I was trying to explore the East Coast and see different areas, different people, and different environments. So that’s what brought me here,” he said. He likes Portland, its visitors, lobster, “and all the beautiful things.”

After becoming a citizen, Yusuf became involved as a community organizer. He remains passionate about serving and giving back. “When I came here, I just followed a dream of helping others,” he said. At Gateway Community Services, he works with children, students, and adults. “I have passion about doing that because when I first arrived, I had the same process. I had a case manager and an interpreter, and that gives me motivation every day. I’m doing the same services that I had – for new people, as well as for the students and the school system.”

Yusuf’s top priorities for School Board are ensuring that schools meet the needs of students with learning disabilities and their families; closing the opportunity gap for minorities, immigrants, or those living in poverty; and making pre-kindergarten available to every family. Universal pre-K, he said, will help families go to work if they are financially struggling, and equalize starting points so no student is left behind. This helps close the opportunity gap, as do mentorships. One task at Gateway is helping youth find mentorship opportunities. He’s seen how effective a strong program can be. The most important thing, he said, is giving students a welcoming environment where they see themselves included. Currently, 47% of Portland Public School students are not white. Yusuf will prioritize including achievements by people of color in the curriculum and hiring more administrators and teachers who are people of color. Having local education students intern in the schools and find ways to encourage them to remain after graduation can help increase representation.

Yusuf’s close relationship with community leaders, organizations, and families would help the School Board build bridges and include parent voices in decision-making, he said. His biggest motivation is helping youth. “One thing I learned working with youth. They look up to you, up to someone who can be a role model.” He wants to tell them, “Yes, you have a place here. Whatever you put in your mind, you can achieve, no matter what difficulty is put in your way.”