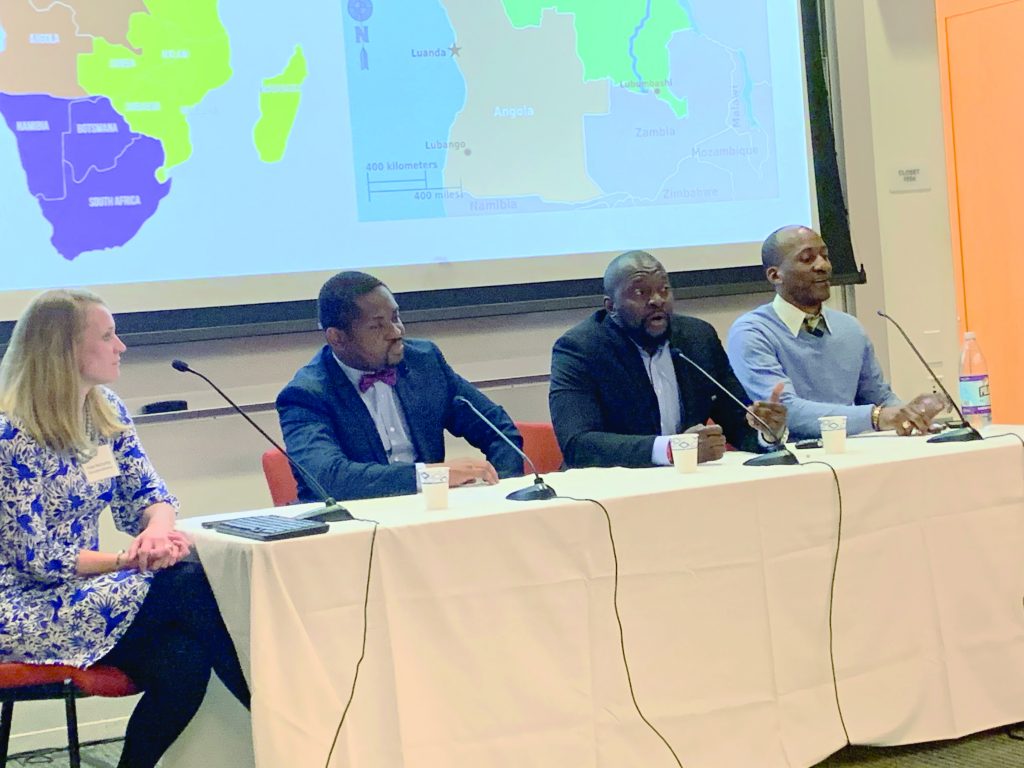 On Monday, December 9, the World Affairs Council of Maine hosted a discussion at the University of Southern Maine among panelists who are originally from Angola and the Democratic Republic of Congo (DRC). Papy Bongibo, President of the Congolese Association of Maine; Nsiona Nguizani, President of the Angolan Community of Maine; and Luc Samuel Kalusivikadioko Kuanzambi Matumona, Community and Cultural Ambassador for Hannaford Supermarkets who is from DRC, were asked to reflect on why so many people have left their countries in recent decades. All three spoke of the lasting impact of colonial rule, widespread corruption, and economic inequity. Transparency International’s perceived corruption index ranks both Angola and DRC as among the most corrupt countries in the world.

Mr. Matumona referred to DRC as a failed state, saying that the government works for a handful of people, and the vast majority of the country is very poor. Mr. Bongibo said that the police are “the first enemy of the people – everyone is afraid of them. If you don’t give them money, they will kill you.” He added that the Congolese have difficulty envisioning the future of their country, and cited ongoing violence and a terrible economy as prime drivers of immigration. The infamously brutal private colonial regime of King Leopold of Belgium controlled DRC from1885-1908, followed by the Belgian government until 1960.

In Angola, a lack of economic diversification, galloping unemployment, inflation, and the absence of a strong private sector have significantly weakened the economy, said Mr. Nguizani. Protests against the government’s policies have erupted in Angola, even though people are afraid of the police, of sharing their opinions, of political gatherings, of courts, and of judges. The government has retaliated by persecuting citizens, and this has led people to flee. Angola achieved independence from Portugal in 1975 after 500 years of colonial rule. Forced labor was widespread during the colonial era. After independence, the country endured a civil war that lasted almost 30 years.

In addition to his work with the Congolese Association, Papy Bongibo is an entrepreneur and founder of the New England African Arts, Entertainment and Community Association. Nsiona Nguizani is Cultural Broker for the Town of Brunswick, a new position created in response to the summer 2019 influx of refugees and asylum seekers. During the “Expo summer” Mr. Matumona served as the Congolese Community’s Lead Cultural Navigator.