What’s in a Word: Swearing in America 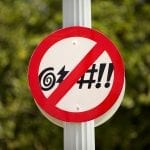 A DSLR photo of Red & white Street Sign in front of a green bush saying to behave in public and to refrain from foul language. Virginia Beach on a bright summer day morning integrating this sign beautifully with a nature background 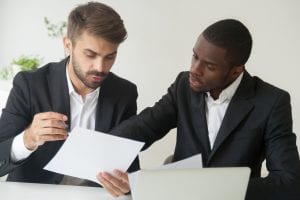 Many immigrants express shock at the frequent, casual swearing and cursing they hear from Americans. Profanity is not acceptable in most African societies, so newcomers are taken by surprise when they hear vulgarity from people of all ages, in all walks of life, in private homes, but also in public spaces.
Africans from different countries who talked to Amjambo Africa! explained that, while young people might use profanity and vulgar expressions when they are alone with other young people in Africa, drinking, joking, and having fun, it is very rare to hear adults behaving this way. It is basically unheard of for women to swear or curse.
Some immigrants from Africa stated that they do not understand why swearing is so popular in America and why it is considered an acceptable practice. They say that in their homelands individuals use vulgar language in public only in extreme situations, yet they remark that it happens in public all the time in the U.S. People swear at work, on the street, and even in front of children and elders. Some people seem to swear and curse multiple times in one sentence – even every other word!
Newcomers often do not understand the meaning or intent of the language they hear, and this adds to the confusion. Some of the terms that Americans consider as mild replacements for more profane language can sound like vulgar terms to Africans. Examples of mild language that can be misinterpreted are: gosh, darn it, what the heck, holy cow, sun of a gun, dang, or shoot.
When newcomers feel embarrassed and offended by language they hear, they are unsure about how to handle the situation. When speaking with a friend or colleague, they want to be polite, while also find a way to gently show their discomfort. Sometimes they have been confronted with people who are clearly emotionally wrought, and who speak loudly and in an unfriendly tone, using vulgar language. This is very uncomfortable for Africans, who are unsure how to respond.
As readers of Amjambo Africa! know, culture plays a key role in the way we live and interact with others. Understanding our own culture as well as those of others helps bridge gaps and eases efforts to work and socialize well together. Knowing that Africans are unfamiliar with the range and varying intensity of American swear words (and their innocuous replacements) certainly can help Americans choose their words a little more carefully. At the same time, recognizing that certain words and phrases are really not vulgar can help Africans feel more comfortable when talking with Americans.