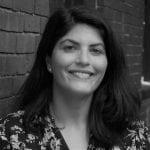 Julia Brown is ILAP’s Advocacy and Outreach Director. She works to improve laws and policies impacting Maine’s immigrant communities and coordinates communications and outreach on immigration laws and legal rights. She writes a monthly column for Amjambo Africa.

Preserve and Fortify Deferred Action for Childhood Arrivals (DACA). President Biden ordered the Secretary of the Department of Homeland Security (DHS) to take all actions he deems appropriate, consistent with applicable law, to preserve and fortify DACA.

Stop Construction of the Border Wall
Stop the Migrant Protection Protocols (Remain in Mexico). DHS has suspended the so-called Migrant Protection Protocols (MPP), which forced asylum seekers at the southern border to wait in Mexico for court hearings in the U.S. DHS has also announced a procedure to process families currently stuck in the program.

Temporarily Stop Certain Deportations and Change Immigration Enforcement Priorities. DHS issued a memo outlining a number of significant policy changes, including a moratorium on certain deportations for 100 days and new priorities for immigration enforcement. The deportation moratorium has been temporarily stopped by a federal court.

Address Southern Border Asylum Crisis. President Biden issued an Executive Order addressing the crises faced by asylum seekers at the southern border. The order plans to support aid and initiatives combating corruption in Central America, and restarts a program for children and youth from Central America (CAM). The Order directs the DHS Secretary to review several anti-asylum rules and policies and to review expedited removal, which is a fast-track deportation process without a hearing.

Improve the Immigration System. President Biden also issued an Executive Order to “Restore Faith in Our Legal Immigration System and Promote Integration of New Americans.” This order reestablishes the Task Force on New Americans, which includes members of agencies that implement policies that impact immigrant communities.
The order also directs agencies to review the 2019 public charge rule. For more about that, see https://www.ilapmaine.org/public-charge.

Rebuild and Enhance Refugee Admissions. President Biden issued an Executive Order rebuilding the U.S. Refugee Admissions Program and also committed to raising the refugee cap to 125,000 starting in October. He ordered DHS to consider interviewing refugees remotely and directed the government to hire more refugee officers. The order declared that the Biden administration would prioritize the resettlement of women, children, and others facing persecution because of their gender or sexual orientation. The order also directs agencies to examine ways to help people displaced by climate change.

Legislation
The Biden administration has announced a large, comprehensive immigration reform bill called the U.S. Citizenship Act of 2021. However, please be aware that this legislation is NOT currently law. Do not pay anyone who tells you that they will help you get citizenship through President Biden’s new bill, because they are not being honest. There is no new law at this time.
We will need your help in the future to contact Maine’s congressional delegation about this bill and other legislation. Find out more at https://www.ilapmaine.org/legislative-priorities.