The ACLU of Maine, Immigrant Legal Advocacy Project (ILAP) and the Refugee and Human Rights Clinic (RHRC) at the University of Maine School of Law are suing Immigration and Customs Enforcement (ICE) for information about its detention activities in Maine. 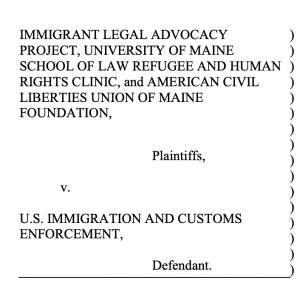 The Freedom of Information Act (FOIA) lawsuit comes as ICE proceeds with plans to open a new facility in Scarborough, with little transparency and consultation of local representatives and residents.

“ICE is a secretive and lawless agency. It evades accountability by operating in the shadows,” said Emma Bond, legal director of the ACLU of Maine. “This lawsuit is necessary to cast light on its activities. When we know what ICE is doing, we can resist its abuses.”

The FOIA lawsuit seeks information about the Scarborough facility and about ICE’s practice of holding immigrant detainees from other New England states at the Cumberland County Jail (CCJ). According to the lawsuit, ICE used CCJ as a short-term detention facility during the pandemic to facilitate transfers to southern states. This practice subjected immigrants in ICE custody to dangerous and unhygienic conditions during travel and in the destination facilities, the lawsuit adds.

“Students at the RHRC and other advocates observed a dramatic increase in the number of immigrants in ICE custody held at CCJ between June and December last year,” said Anna Welch, director of the Refugee and Human Rights Clinic at the University of Maine School of Law.

“In most cases, immigrants held at CCJ from June to December had no connection to Maine. ICE agents quickly whisked them away – often in the middle of the night – to detention centers in southern states facing COVID-19 outbreaks. The ICE facility in Scarborough raises serious concerns given ICE’s detention practices to date in Maine,” said Welch.

The lawsuit says these unnecessary transfers violated ICE’s own pandemic response policy, which permits transfers for a limited number of reasons, and after following quarantining procedures.

“Families are at risk of being broken up, and people in ICE custody face real harm. It’s harder for them to access legal assistance,” said Philip Mantis, legal director of Immigrant Legal Advocacy Project. “With the stakes so high, ICE must be held accountable for following the law and being transparent in its conduct.”