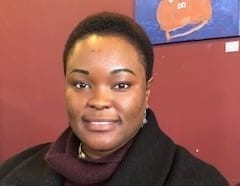 Thokozile Phiri-Nkhoma is a well-known international TB (tuberculosis) activist from Malawi and the Executive Director of Facilitators of Community Transformation (FACT). She is a TB survivor herself and has lost three of the six members of her own family to the disease. She spoke on March 24 in Portland about her work advocating globally for increased attention and better policies in the fight against TB.

TB is the world’s leading infectious cause of death. “Like a massacre it is killing people all over the world,” Ms. Phiri-Nkhoma said. These deaths occur mostly in poor and developing countries where living conditions are crowded and people  cannot afford to miss work to travel to clinics that dispense medicine. 4,600 people die every day from the disease, which is mostly spread through a cough. In 2016, 10.4 million people fell ill with TB, and 1.7 million died from it. Yet TB is a treatable disease and with proper support the vast majority of patients can be cured.

Ms. Phiri-Nkhoma knows first-hand about the devastation TB brings to a family. Her father died from the disease in 1997, when she was eleven years old. Prior to the onset of his illness in 1990 he had been a chartered accountant and respected as a community leader. Once he became sick, however, he started missing days of work, and eventually he lost his accounting job. After that he found other jobs, but because of his illness was unable to keep any of them long. He was the family’s only breadwinner, and they sank into poverty.

Around the time Ms. Phiri-Nkhoma’s father died the youngest child, a baby, died too. Their mother, who had never worked, was left to care for four children. Their mother was unable to pay school fees and they were evicted from their home. Then the youngest brother died from TB and Thokozile Phiri-Nkhoma  herself contracted the disease. Luckily she was able to get a full course of medical treatment, and she was cured. Her mother’s friend supported the children in school. “We thank God for the people who helped us – kind people who helped us go back to school.” Eventually Ms. Phiri-Nkhoma finished university.

Despite the family’s familiarity with TB they did not realize that Ms. Phiri-Nkhoma’s mother had contracted TB. The medical tests came back too late to save her. TB is known as a ‘silent killer’, because symptoms don’t always show themselves at first, and when they do, they can be easily mistaken for pneumonia or malaria. The World Health Organization estimates that 4,000,000 people worldwide currently have the disease without knowing it. Once treatment begins,  a lot of support is needed, because it is a months-long course of treatment, and hard to see through, especially for someone living in poverty. The average TB patient loses up to 4 months of work and up to 30 percent of their annual income. Failure to complete treatment is partially responsible for a recent rise in drug-resistance.

“The world has gotten so close we can’t just avoid TB. TB is a disease without borders. It can come anytime, into your body anytime. It doesn’t care about languages, countries.” Ms. Thokozile Phiri-Nkhoma emphasizes that “… one untreated case can impact fifteen people. TB is no longer a doctor’s issue alone. It is a social and civil issue.” Resources are urgently needed to deliver new and better tools for the patients who need them. At present there is a two billion dollar funding gap between what is needed to eradicate TB and what is available.

Ms. Thokozile Phiri-Nkhoma remains hopeful. “This could be the year to create the political will to end the disease,” she says. World leaders gathered in India earlier this year to discuss TB and later this year, heads of state will gather at a high-level UN meeting to make specific, public commitments to end TB. When the United Nations held a similarly high-level meeting to discuss HIV/Aids the campaign to fight that disease ramped up. She hopes the same result will come from the upcoming UN meeting. She urges the public to contact their legislators. “Let them know you care about this issue and you want them to prioritize the fight to end TB.”

Thokozile Phiri-Nkhoma was brought to Maine by RESULTS, Inc., a nonprofit, grassroots advocacy 501(c) 3 and 501(c)4  organization focused on issues related to ending poverty. There are RESULTS groups in over 100 locations across the country, as well as individual activists in many other communities. A group typically consists of 4–8 activists who meet regularly to plan meetings with members of Congress, strategies for generating media and getting the advocacy skills they need to make hunger and poverty political priorities. RESULTS has started a group in Portland. For more information please contact Amanda Beals, Global Grassroots Expansion Manager at [email protected]