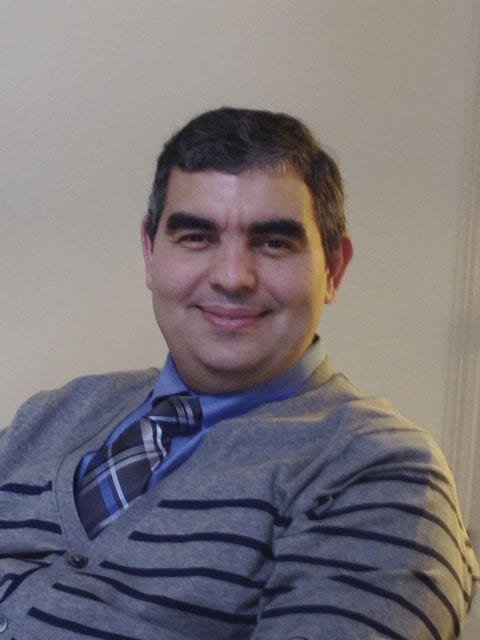 Tarlan Ahmadov was born and raised in Baku, the capital city of Azerbaijan, during the Cold War era. He moved to Maine in 2004, and has been working at Catholic Charities ever since. He started as a volunteer, later became a case manager, then program director. Since 2017, when the State of Maine withdrew from managing the federal resettlement program in Maine and the Office of Maine Refugee Services took over, Mr. Ahmadov has served as State Refugee Coordinator. In his current position, he manages seven statewide programs and the funding for programs in five school departments. All of these programs fund and provide direct services for both refugees and asylees, and Mr. Ahmadov wants to be sure Maine’s asylee and refugee population knows about all the programs available to them. He is proud of the work Catholic Charities does, and says he “puts his soul into it. I see people who started with nothing, now living as homeowners, running businesses, working hard to educate their kids. It is meaningful work,” he says. “The services we provide are impactful.”

Mr. Ahmadov’s early years were challenging, and he knows what it’s like to suffer from a lack of resources. Although he says he had “a lovely childhood,” it wasn’t an easy one. His father died from cancer when he was five years old, leaving his mother to raise Mr. Ahmadov and his three siblings on her own. “She sacrificed her life for us,” he says, “pushing us to study, working from morning to night.” Provisions were scarce under the Soviets, with food and clothing rationed by a coupon system, very little bread and meat, and waits of months or even years to get special items, such as a piece of furniture. As the youngest in the family, he was often the one sent to stand in long lines, waiting to collect the family’s meager rations.

Although life in Baku had its challenges under the Soviets, he says “everything fell into real disarray” suddenly, in the late 1980s, just when he entered his university years. “The academic elite started pushing for independence, Russia was on one side, Iran was threatening us, we lost 20% of our land to Armenia, and the result was one million internally displaced people and trains of refugees flooding Baku.” Mr. Ahmadov remembers the brutality and confusion of those years, with rural people pouring into the city and looking for work, neighbors turning against each other. widespread fear that Russia or Iran would invade at any moment, atrocities inflicted on civilians, injured and dying people filling the streets, and pervasive hatred toward the Soviet Union. His best friends left Baku to escape the chaos, and Mr. Ahmadov felt his expectations for his future life fall apart around him.

A young intellectual, he began to explore different religions, looking for truth, and eventually found the Bahai community, which remains a deeply important part of his life today. He graduated from his university with a Master of History and Social Science degree and worked for a number of years with local and international non-governmental organizations (NGOs). This work included screening refugees from Iran, Iraq, Afghanistan, and Chechnya. Eventually he and his wife decided to move to Maine, where his wife’s mother’s family was living, and where they believed they would find safety and a place where they could build a stable family life. His relatives are now spread around the world in Israel, Canada, Russia, Turkey, Australia, and the United States. The Ahmadovs have two children, who love both Maine and Azerbaijan. “We have taught our children that we belong to the world, and the world belongs to us. We feel a love of country, a love for others, and a responsibility for our actions. We believe that we are citizens of the universe,” he says.

“When my wife and I came to Maine, we didn’t have anything,” he says, and so he worked three jobs – five days a week at Catholic Charities, weekend nights in security, and cleaning on Sundays. He remembers that they were lonely. He missed his mother, his siblings, his best friends, and the warm Caspian Sea. On the other hand, he knows he was fortunate to have a good education and work background, speak several languages, and possess an extroverted personality. He believes that the United States “is a blessed country. It is safe, there are many resources, there is freedom. At its core, the U.S. is the best. We are going through a period of crisis now, but I’m optimistic for the future of the country. And immigrants – with their different shapes, colors, languages – are a foundation of this country. They always have been.” Tarlan Ahmadov’s life trajectory prepared him to understand the needs of asylees and refugees, and to help them thrive and feel at home in Maine. He feels a deep love for Portland and for Maine. That love “is in my veins,” he says. “I am at home in Maine.” Through his work, and the programs he administers, he wants to help others feel at home also.

Services are available for asylees as well as refugees. Asylees are individuals who have been granted political asylum by United States Citizen and Immigration Services and are authorized to work in the U.S. They are eligible for social services, cash assistance, and medical Assistance, and they can apply for a green card. Refugees and asylees in need of assistance are urged to contact the office at 80 Sherman Street, Portland, or 27 Pine Street, Lewiston, either by stopping in, or by calling 207-523-2745.

Direct Services for Refugees and Asylees

Refugee Cash Assistance: Available for eight months from the date of arrival for refugees and from the date of asylum granted for asylees. For those who are financially needy but ineligible for Temporary Aid for Needy Families (TANF).