Special Report from Nigeria: Protester vows, ‘We won’t back off unless substantial change occurs.’ 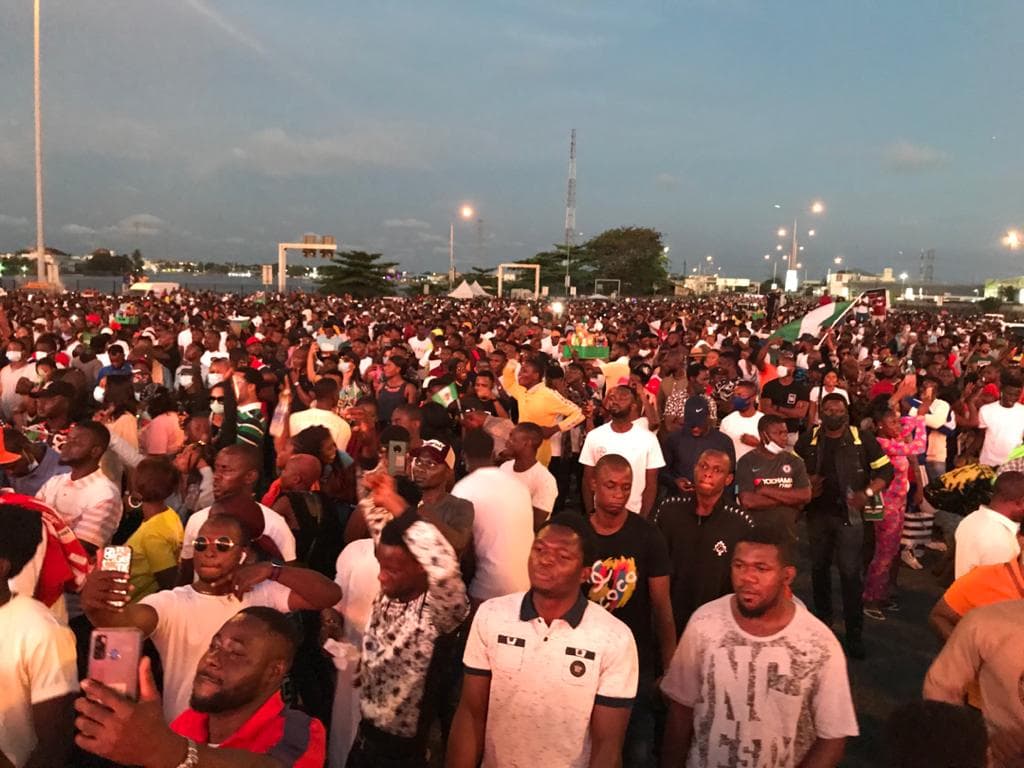 After a two-week standoff during which thousands of protesters have taken to the streets to demand that the Nigerian government dismantle the Special Anti-Robbery Squad (SARS), which is accused of widespread police brutality, protesters are standing firm, a source on the ground in Lagos told Amjambo Africa on condition of anonymity.

“We are not backing down until the government addresses items on our needs list, one by one. Ordinary Nigerians are tired of providing part of the police’s salary,” confirmed our source, a visual artist in Lagos. He explained that police in Nigeria are underpaid, and commonly supplement their earnings by extracting bribes and other favors from ordinary citizens. “With the low salary they are paid, you can’t trust the police to carry an AK-47 and use it just to protect people. Police stations are full of innocent people dying at the hands of the police.” 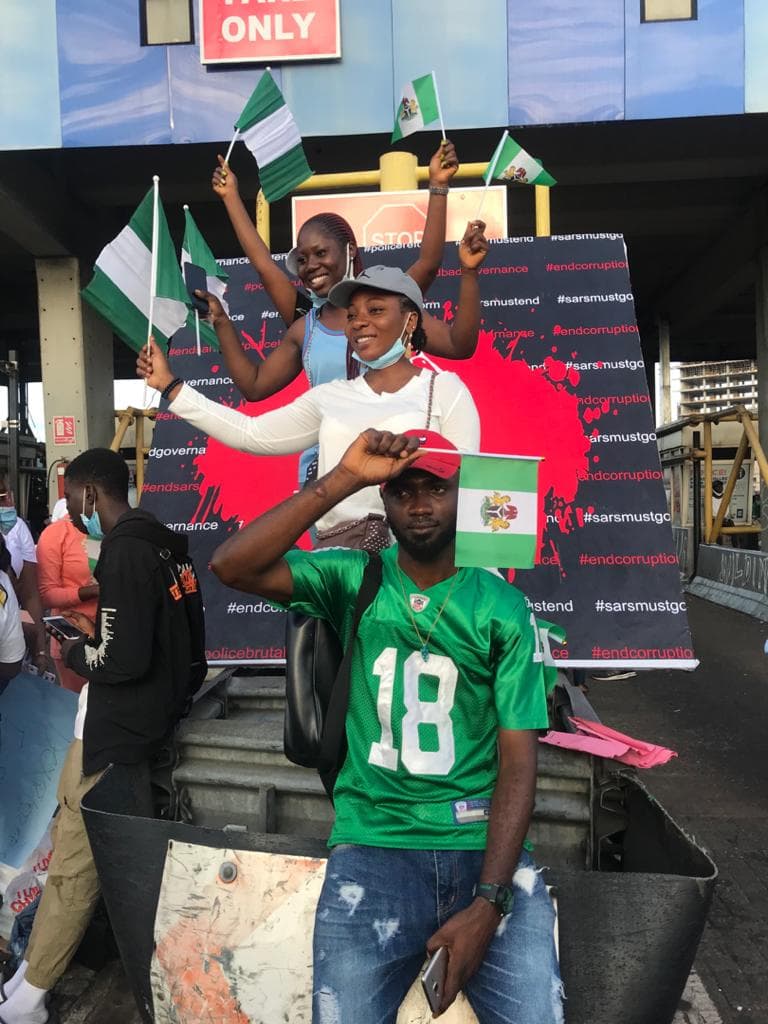 Thousands of protesters have blocked roads in hundreds of towns in this most populous of countries on the continent, throwing daily life in Lagos and elsewhere into chaos. According to Amnesty International, the police have responded to the unrest by killing protesters.

Our source recounted a horrific scene that he witnessed in Lekki, an area in Lagos considered ground zero by protesters. “On the morning of October 20, engineers in Lekki, where the protestors are based, dismantled road cameras. Around 7 p.m., they switched off the road lights, and army vehicles approached the protesters and started shooting live ammunition at them. We fled the bullets, which gave the shooters an opportunity to clean up the dead bodies, so that nobody could bear witness.” At least 12 protesters were killed in Lekki, and hundreds more were injured, according to Buzzfeed News. 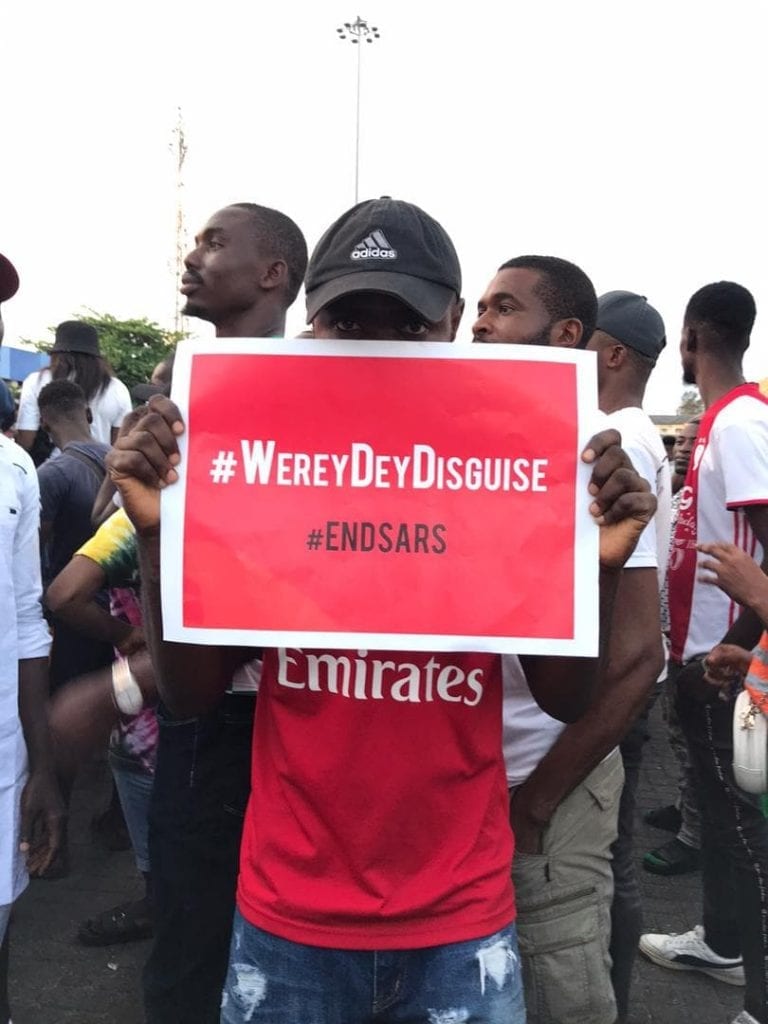 The government has remained silent about the Lekki massacre, but international politicians have condemned the killings. An excerpt from U.S. presidential candidate Joe Biden’s statement on the protests reads, “I urge President [Muhammadu] Buhari and the Nigerian military to cease the violent crackdown on protesters in Nigeria, which has already resulted in several deaths. My heart goes out to all those who have lost a loved one in the violence.”

Nigerian President Buhari has condemned the protestors as unpatriotic. He has not mentioned the police killing of protesters. Amjambo Africa’s source said that, in response to demands to dismantle SARS, President Buhari simply changed the name of the police unit to Special Weapons and Tactic Unit (SWAT), and left the rest of the unit unchanged.

An #Endsars hashtag – a call by Nigerians of all ages for the government to end SARS – has been trending on Twitter in Nigeria for several weeks. The hashtag has also been trending internationally, including in the U.S. Protesters are using WhatsApp and online coordinated messaging to outline and broadcast their demands. They have been sharing encounters with the police through social media.

Protesters argue that a country that allows its police to kill and abuse people with impunity is not a mature democracy. Amnesty International has documented 82 cases of killings, extortions, rapes, and abuses from SARS between 2017 and 2020. The Washington Post reports that prisoners are subject to sexual assault, torture, and humiliation in police custody in Nigeria.

Nigerians have been calling for an end to SARS since at least 2016, when an officer killed a man and fled the crime scene – and the murder was caught on video. The video sparked widespread protests, and the public shared an avalanche of other violent experiences with SARS.
The protest movement has gained international traction. CNN reports that the Nigerian Diaspora from the United Kingdom, Germany, and Canada are supporting the protesters. Kanye West has expressed his solidarity, along with other celebrities from the worlds of music and sports. All are urging the Nigerian government to listen to the people.

Akinwumi Adesina, a former minister and currently president of the African Development Bank, has been tweeting frequently on the protests. “I am stressed by the unrest in Nigeria. The youth are the life of our nation. They are the present, our tomorrow, and our future. Securing the future must start with protecting their lives,” he recently tweeted.

Volunteers are also supporting the protesters. A crowdfunding effort lead by the Nigerian Feminist Coalition has raised close to $180,000. The funds are paying the medical bills of injured protesters, as well as supplying protesters with water, food, and glucose. Lawyers have stepped in and have secured the release of some detained protesters. Small businesses are offering meals in many cities of the country. Volunteers are documenting people’s experiences with SARS.