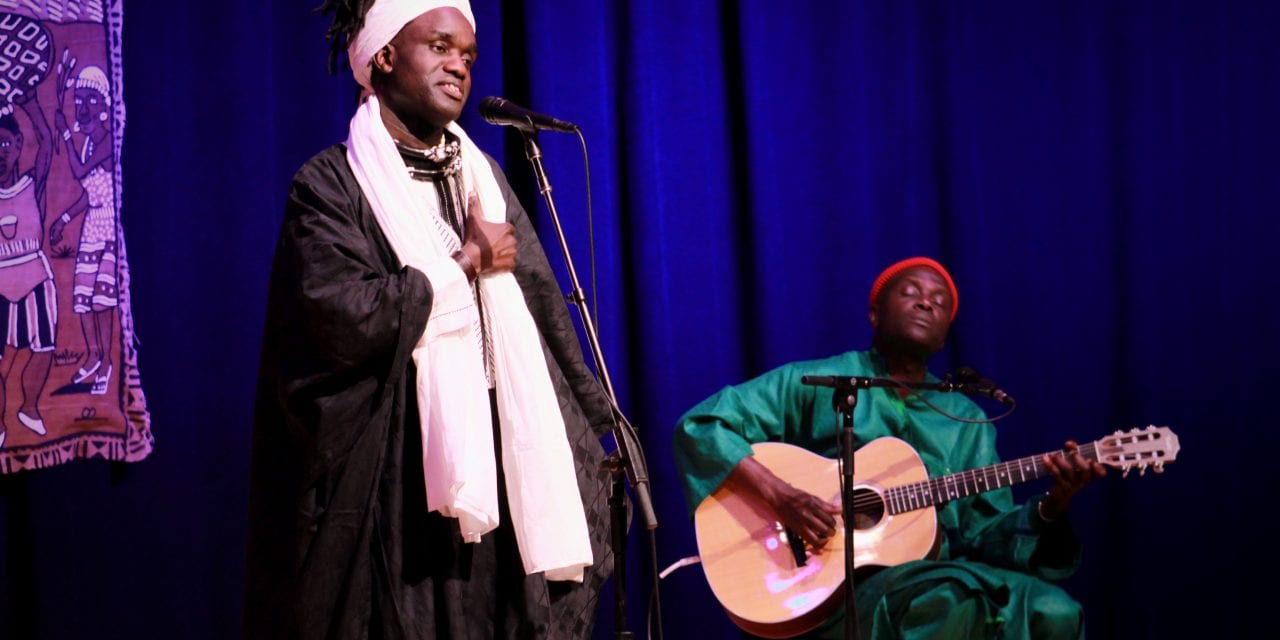 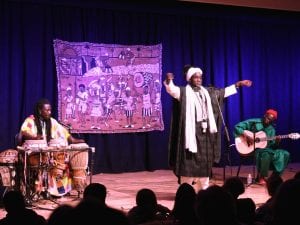 On Tuesday, February 26th, for their first performance in the United States, Senegalese musicians and storytellers Boubacar Ndiaye, Baye Cheikh Mbaye, and Pape Ndiaye Paamath came to Kresge auditorium at Bowdoin College to share Voyage sans visa (Voyage without Visa, or, in wolof, Tukki saa suné). In the performance, accompanied by music, dancing, and singing, griot Boubacar Ndiaye told stories of immigrations and the good, the hope, and the struggles that result from it.

The songs and stories, presented in French and Wolof, explored the feelings of leaving one’s home, family, and friends behind when travelling to new lands. The atmosphere of music and singing paid homage to the performers’ home country, Senegal, and to countries that adopted them. Percussionist Baye Cheikh Mbaye played the djembé, the doumdoum, the sabar, the calebasse, and the tama (percussion instruments from West Africa) while Pape Ndiaye Paamath played guitar. Boubacar Ndiaye explained in an interview with JM France that the guitar incorporated in the performace sounds from other countries, a testament to one of the performance’s themes of embracing different cultures. 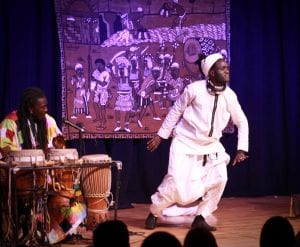 “The culture we sit on cannot be seen without seeing another,” said Ndiaye, “Living with others allows us to know who we are.” Voyage san visa concerns the desire of freely traveling and learning from the voyage’s experiences. This message lived through each of the performers’ words, hymns, and musical notes. At the beginning, Ndiaye introduced the idea by telling the audience the importance of watching birds fly, as their freedom to travel allows them to see the world without restriction, a freedom the performers hope to one day have.

Voyage sans visa was organized by Katherine Dauge-Roth, Associate Professor and Director of Romance Languages and Literatures Department, with the help of the Departments of Africana Studies, History, and Music, and the Blythe Bikel Edwards Fund. The storyteller-musicians participated in Dauge-Roth’s classes on spoken and written word and two other classes in the Francophone Studies and History departments, where they taught students about Senegalese oral tradition, spoke of the role of the griot, shared their personal experiences of immigration, and led workshops of storytelling and dancing with the students.

To Ndiaye, “Storytelling brings music, and music tells a story; the two unite into one voice.” That powerful voice sent an echo through the audience that resonated in each person who had the fortune to hear it. Amongst the audience were members of the Francophone immigrant community who contributed to the success of the night and expressed their appreciation of the performance when Ndiaye stayed for discussion.