The Seal of Biliteracy is an annual award given to students who achieve proficiency in English and at least one other language by the time of high school graduation. The Seal seeks to encourage students all over Maine to pursue biliteracy, recognizes the positive cognitive and academic benefits of being proficient in more than one language, and can serve as evidence of academic and workplace readiness. In 2019, the first year Maine awarded the Seal, 168 high school graduates from 24 different Maine schools earned the distinction. Currently, the Seal of Biliteracy is awarded by 36 states and the District of Columbia. The first state to adopt the Seal was California, in 2011. Maine adopted it in 2018. 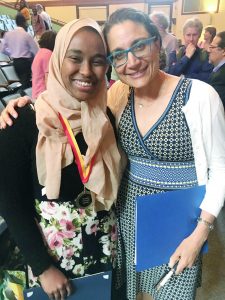 The award is available both for heritage speakers who arrive in Maine speaking another language and then learn English after they get here, and for local Maine kids who achieve proficiency in a second language. The Seal is designed to give students an important edge during the college application process, as well as throughout their professional careers. Criteria for assessing proficiency are set by the Maine Department of Education, but local school districts and teachers are responsible for ensuring that eligible students take the appropriate tests.
According to Lavinia Rogers, World Language Specialist for Maine’s Department of Education, students were awarded the Seal in the following schools during the 2018-2019 school year: Androscoggin County – Saint Dominic Academy; Aroostook County – Caribou High School, Central Aroostook Jr./Sr. High School, Houlton High School, Maine School of Science and Mathematics, Presque Isle High School; Cumberland County – Baxter Academy, Casco Bay High School, Deering High School, Gorham High School, Gray-New Gloucester High School, North Yarmouth Academy, Portland High School, South Portland High School, Westbrook High School; Franklin County – Mt. Blue High School; Kennebec County – Cony High School; Knox County – Camden Hills Regional High School; Penobscot County – Brewer High School, Hampden Academy, Orono High School, Stearns Jr./Sr. High School; Sagadahoc County – Morse High School; and York County – Kennebunk High School.
The Seal is included on the student transcript. In addition, students receive a medal. Schools also have the option of purchasing a sash or ribbon that the student can wear for the graduation ceremony. Maine’s public universities are offering six or more college credits to students who have earned the Seal, which can reduce college costs by more than $1,500. Thirty-nine Maine Seal of Biliteracy recipients applied for and were accepted for fall 2019 admission at Maine public universities.
Thanks to the efforts of Carlos Gomez, Portland Public Schools Director of Language Development, Portland began awarding the Seal in 2018, before Maine adopted it as a state. In the Portland Seal’s first year, 24 seniors received the honor. One year later, in 2019, 60 Portland students graduated with the Maine Seal of Biliteracy. This year, nearly 100 students (grades 10, 11, 12) registered to take the Seal qualifying test in October.
Portland Public Schools Superintendent Xavier Botana noted, “Many of Portland’s students are heritage speakers of languages other than English. The Seal gives them a chance to show prospective colleges and employers that they possess unique and valuable knowledge and skills.” Thus far, the Seal of Biliteracy has been awarded in the following languages in Portland: Arabic, Dari, French, Japanese, Kirundi, Mandarin, Nyanja, Portuguese, Russian, Somali, Spanish, and Vietnamese. New languages being tested this year are German, Lingala, Tagalog, Turkish, and Urdu. More than 60 different languages are spoken in the Portland schools.
Annemarie Orth, World Language Acquisition Specialist at Portland Public Schools, said, “Kids who come to us speaking another language, and then learn English, have a tremendous asset. Their multilingual status is a huge asset.”.
Heritage speakers in Portland who apply for the Seal must complete an essay in English about their “language journey.” The following are samples of student essays. Both of these students were awarded Seals of Biliteracy.