Scholarships for kids in Angola

Manuel Vemba Kiambuwa launched the nonprofit International Fund for Development and Modernization of Angola (IFDMA) in 2019 with the vision of improving the lives of children in his home country of Angola, as well as in Congo-Brazzaville, Congo-Kinshasa, and Mozambique. Since the founding, IFDMA has begun work in Angola, tackling the high illiteracy rate by providing scholarships for children from disadvantaged families who cannot otherwise send their children to school.

Benedito is IFDMA’s youngest donor. When he heard about IFDMA, he convinced his mother to withdraw $60 from the savings she holds for his future and asked her to donate to help fund a scholarship for a child in Angola.

Maine-U.S.-Solidarity Scholarship Program is a program of IFDMA, and Vemba is the leader of the program. “Education is the key to solving many problems, and I always say we have 1,000 problems in Angola. We won’t be able to solve them all at the same time. So, we will start with one thing, and from there we will slowly develop different programs to hopefully solve at least 10 of the 1,000 problems! In the first phase, we will offer scholarships exclusively to primary school students in the communes of Kicolo and Funda, municipality of Cacuaco, province of Luanda,” he said.

Work has begun in Cacuaco, a densely populated area with a large number of low-income neighborhoods. So far, the scholarship program is sponsoring the education of five children, with a goal of sponsoring 25 children for the upcoming school year. “Our budget for this year is $2,000; $60 is enough to cover the scholarship and administrative expenses of one child for one year.”

Sixty volunteers staff the program on the ground in Angola. Their role is to interact with the families of the scholarship candidates, visit partner schools, and request feedback from the teachers. The process for selecting children involves evaluations of behavior, class participation, education history, family history, and income. “We want to make sure we target low-income families … and we want to be there not only for the students, but also for the schools.” Kiambuwa explained that some of the children will attend private schools, which are very different from private schools in the U.S. “In Angola … the [private] school buildings often don’t have windows, doors, or sometimes even chairs, and schools usually have many organizational difficulties.” So, the funds will also be used to repair the buildings and provide support to the partner schools.

“We have designed a follow-up program to oversee how the scholarships are being managed,” said Vemba, explaining that a committee is responsible for monitoring and evaluating full compliance with the program, as well as documenting any difficulties. “There are a lot of people who start scholarship programs in an attempt to aid schools in Africa, but they fail to follow up … so every six months we’ll sit down with the school, the student, and their parents, and analyze how the scholarship is going, whether there are any problems, and how they can be addressed. Our ultimate goal is to follow up with a student until they complete university education.”

The program’s education specialist is Anita Charles, senior lecturer in education, and director of secondary teacher education at Bates College in Lewiston. “I’ve been in the field of education all of my life, and I’ve always had a strong passion for making educational opportunities more available to kids around the world,” Charles said. She met Vemba during the summer of 2019, when approximately 500 asylum seekers arrived in Maine from the southern border. In order to help alleviate the housing shortage, she took an immigrant family into her home for a few months at that time. They had come from Congo, by way of Angola, and Vemba was the case manager of the family she hosted.

“There are many people who have ideas about how to better the world, and few of them succeed,” said Charles. “But when Manuel mentioned this project to me, what I saw in him was that he not only had a vision, he had a concrete plan. Manuel is incredibly bright, committed, and aware, and I have great faith in him and what he’s doing. I’m very happy to be working with him, and I think this project has enormous potential.” 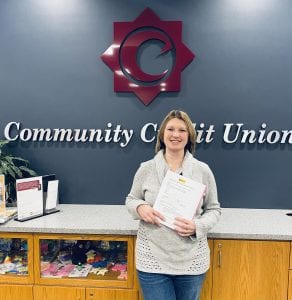 Jennifer Hogan, CEO of Community Credit Union in Lewiston-Auburn, is another partner. “I met Manuel when I interviewed him for a position at Community Credit Union, and now I have the pleasure of working with him every day,” she said. “Community Credit Union has a strong commitment to our community, and we give back in a lot of different ways, whether our money or our time. When Manuel came to us and said that he’d love to have us sponsor a child, the committee that reviews all sponsorship requests was in unanimous agreement to get behind this initiative.” Hogan said she has been asked why the credit union focuses outside the local community. “For us, Angola is part of our community. We have a lot of local community members who are from Angola, who have family in Angola, and are supporting people back home. And we feel this is an opportunity for us to be part of that.” Hogan is personally sponsoring two children in this program.

“One of the reasons I decided to create this nonprofit is because of my personal experience,” Vemba said. He immigrated to the U.S. thanks to the Diversity Visa Program, which selects around 50,000 people from around the world to settle in the US each year. “I lived in an area of Luanda ravaged by poverty. One day, by chance, I saw information about this diversity lottery program online and I decided to apply without thinking much of it,” he recalled. “Two years later, I got an official email saying that I had been selected to participate and receive a permanent residency visa. I was shocked. I shared the news with everyone, but no one believed me. Everyone was convinced it was a scam. The only person who believed me was my mom.”

Encouraged by his mother, Manuel visited the U.S. Embassy, which confirmed that he was indeed invited to build a life in the U.S. “I cried because it was like a dream come true,” he said. “Only there was one problem – I didn’t have the money for the plane ticket. My mom wasn’t working, and my father had a new family he had to take care of. When I shared my dilemma with my university teacher in Angola, he said he would help me gather the money, and my university tutors and friends came together and paid for my ticket. So, I ended up coming because of people who believed in me. And that’s what inspired me to create this nonprofit. I want to give back to the community that was the sole reason I was able to move here.” For more information: https://www.ifdmanonprofit.org