Resilience Week: Opening the door to Inclusivity at MECA

Maine College of Art’s (MECA) inaugural Resilience Week, conceived by students, and dedicated to raising awareness and spurring dialogue around topics relating to racial, sexual, and gender inclusivity at MECA, took place between February 7-February 14 at MECA. The week’s activities, which included a dynamic curated art exhibition with 23 participating artists, film screenings, workshops, talks, and children’s programming, were organized by the Diversity Committee at MECA and the Students of Color Coalition.

Resilience Week was “a direct response to experiences and conversations among students of color,” explained Alejandra Cuadra, who curated the show along with fellow student Ashley Page. They spoke of MECA’s strengths, with its facilities, its studios, and its public engagement minor, but they also spoke of the challenges associated with attending MECA as a person of color. “It is difficult to be in a space where you don’t see yourself,” they agreed. 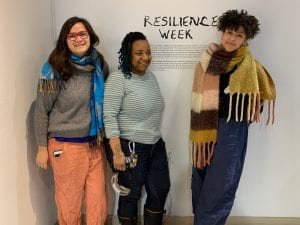 According to the mission statement of the exhibition, the intention was to “showcase the beauty and resilience of diversity while critiquing the Western art historical canon that perpetuates racist, sexist, and exclusionary pedagogy throughout art institutions.” Lynch urged the decolonization of the curriculum and the inclusion of previously overlooked artists. “Leaving out artists of color from the curriculum is racist,” she explained in For Your Information, an audio installation included in the exhibition. Listen here.

“The art is there,” said Cuadra. “You just need to open the door.”

The exhibition’s large mounted timeline, from Fall 2013 to the present, offered “a brief snapshot of events related to personal experiences in addition to the College’s diversity and inclusion efforts told through the perspective of student leaders of color. Setbacks and milestones appear side-by-side.” According to the timeline, setbacks include semesters when students of color chose to leave MECA. “These were talented students from across the country who came here to study, and experienced blatant racist encounters, racially motivated microaggressions, and unfair treatment,” explained Athena Lynch, who played a key role in organizing Resilience Week. Positive milestones are many and include diversity trainings, the formation of the Students of Color Coalition and its predecessor, International People of Color Group – and Resilience Week.

The organizers commented on the hard, behind-the-scenes work involved in putting on the week, as well as how enormously gratifying it felt to see work by artists of color filling the halls of MECA. President Laura Freid said, “Promoting a culture of racial justice and social change is one of the five core goals that are being addressed through MECA’s strategic planning process. I am inspired by the work that our Diversity Committee and Students of Color Coalition have brought to Resilience Week and to MECA.” All signs point to a second annual Resilience Week in 2021. 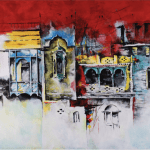 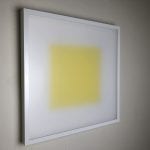 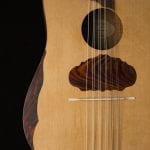 Jawad AL Fatlawi The Goldeneye Guitar Oud This Guitar-oud body and neck are crafted from fine mahogany, while the soundboard is made of cedar. It uses traditional classical guitar nylon strings. 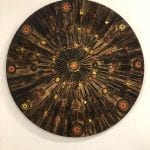 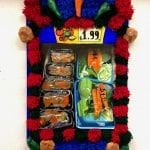