Ramadan is an especially spiritual month for Muslims. This year, Ramadan began in the U.S. on the evening of May 5 and ended on June 4, at the waning crescent moon. The Muslim calendar is lunar-based, so dates change from year to year.
During the month of Ramadan, Muslims try to strengthen their relationship with Allah (the Arabic name for God) and behave in the way Islam teaches. The observance of Ramadan is one of the five pillars of Islam – one of the five main duties associated with being Muslim. Islam emphasizes the importance of being charitable toward others, and Muslims believe that fasting during Ramadan helps them learn to be charitable.

According to Mohamed Awil, executive assistant of Gateway Community Services, who has been observing Ramadan by fasting since he was 13 years old, “Ramadan is all about being grateful, being in the shoes of people who don’t have anything to eat for days. Those who eat every day are so lucky to have what we have.”

During Ramadan many Muslims attend mosque more frequently, try to read the Qur’an from beginning to end (some more than once), increase their charitable giving, and generally practice self-restraint. The idea is to focus on one’s relationship with God. According to Islam, Ramadan commemorates the month when the Qur’an, the Holy Book of Islam, was first revealed to Muslims through the Angel Gabriel by the Prophet Muhammad. As such, it is considered a blessed month, and for most Muslims, it is a joyous month. 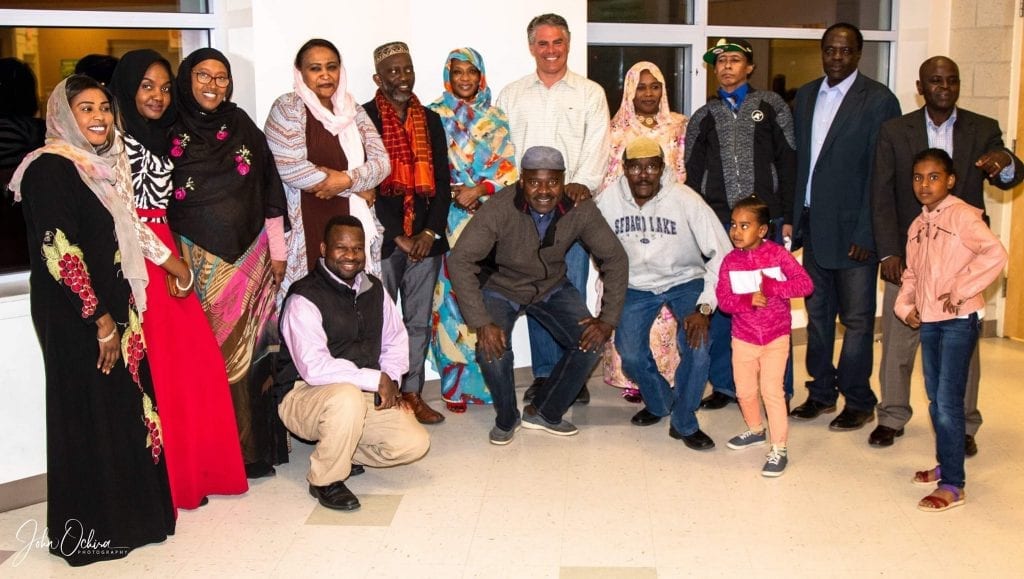 Those who fast take nothing into their bodies from sunrise to sunset throughout the month, believing that the hunger and thirst they experience while fasting teaches them empathy. Certain categories of people are exempted from fasting, such as children who have not reached puberty, adults who are sick, and the elderly. At sunset each day Muslims break their fast, first with a small meal before prayers, and then with a larger meal — called Iftar — shared with friends and family. The evening meals are festive and generous. 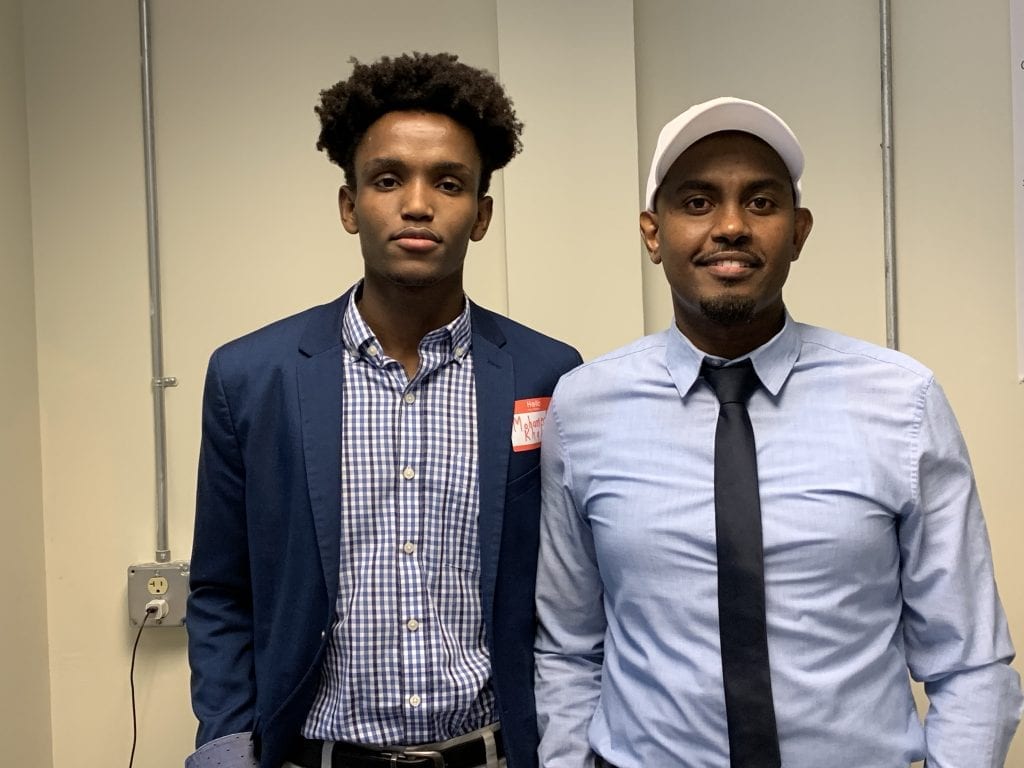 Governor Mills hosted the Blaine House’s first-ever Iftar dinner on Sunday, May 19, for Maine’s Muslim leaders. The event garnered praise from the Muslim community in Maine because it signaled the Governor’s commitment to promoting inclusivity.

Inza Ouattara, Maine State Refugee Health Coordinator at Catholic Charities Maine and president of the Côte d’Ivoire Association of Maine, agreed with Mr. Ahmadov. “I was personally thrilled by the invitation to the Blaine House,” Mr. Ouattara said. “The event was very touching. I really appreciate that Governor Mills is trying to create an inclusive community in Maine. The Iftar dinner made a big impact in the Muslim community.”

Catholic Charities of Maine’s State Refugee Coordinator Tarlan Ahmadov, who was instrumental in planning the dinner, said, “The Governor is unifying communities and building a strong state for the future. A true and wise leader always brings people together, and nurtures peace and harmony.”

“It took a big heart and open mind to open the Blaine House for the Iftar ceremony,” agreed Zoe Sahloul, President and Founder of the New England Arab American Organization (NEAAO). “For other governors, this may have been a big ‘No no.’ Not for this governor. Janet Mills is not like other governors. She is connected to her base and wants to be empathetic to their culture and their beliefs. This is, by definition, the quality of a great leader — a leader that looks at people as human beings and does not classify them based on what religion they belong to. Thank you, Janet Mills. It is good to be home.” 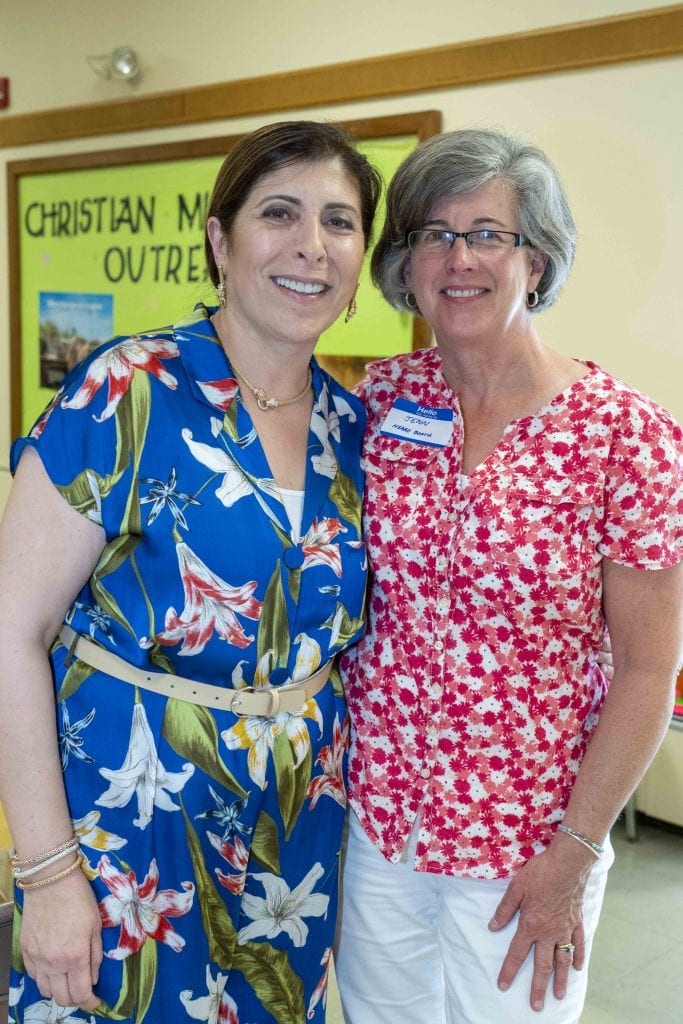 Maine’s Muslim population is sizeable. Reza Jalali, a writer and professor, estimates that between 7,000 and 8,000 Muslims live in Maine now. He says they come from Somalia, Iraq, Sudan, Ghana, Afghanistan, Iran, Kenya, Bosnia, Kosovo, Bangladesh, Syria, Lebanon, India, Pakistan, Egypt, Turkey, Republic of Azerbaijan, and Malaysia. He estimates that there are 10 mosques in Maine, and that all the major public and private universities in the state have Muslim student associations. A variety of different organizations hosted Iftar dinners during the month of Ramadan. For example, Gateway Community Services hosted an Iftar dinner for Muslims and non-Muslims alike on June 1 that featured “food, faith, and culture,” in the words of Abdullahi Ali.

“Islam connects all Muslims, no matter what country they are from,” Mr. Ouattara said. “For me, being a Muslim in Maine is like being a Muslim anywhere. Islam teaches that wherever you live, you should abide by the laws of the place you are living, so as Muslims we conform to the laws of Maine. For example, here you have to go to a farm to slaughter a ram for Ramadan.” 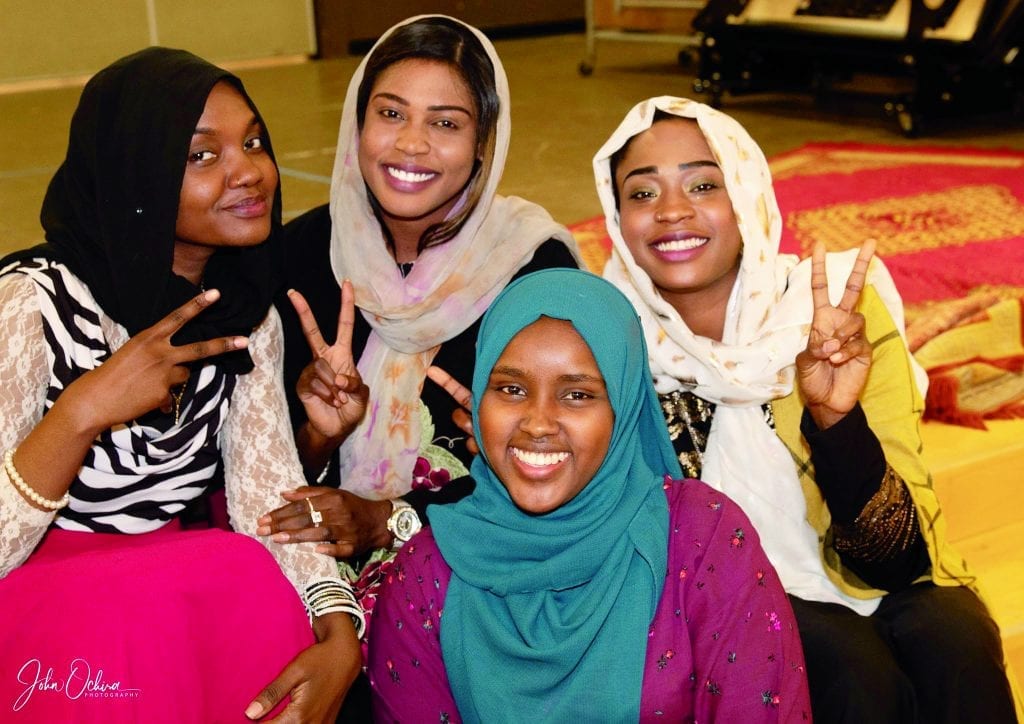 Muslims around the world end Ramadan each year with Eid-al-Fitr, a joyous, three-day celebration, during which they celebrate by giving alms to the poor (another of the five pillars of Islam), praying, dressing in finery, visiting friends and relatives, and feasting. Hundreds gathered at the Portland Expo building on the morning of June 4 to pray and celebrate. About 175 people in the Augusta area enjoyed food, friends, family, and fun at the Capital Area New Mainers Project’s Eid celebration on June 7. On June 8, the Somali Mainers Youth Network and Sudanese Roots collaborated in hosting an Eid celebration led by youth. The New England Arab American Organization held an Eid celebration on June 9 at the Westbrook Congregational Church that was attended by 300 people and featured live music, Mediterranean food, and fun activities for kids. 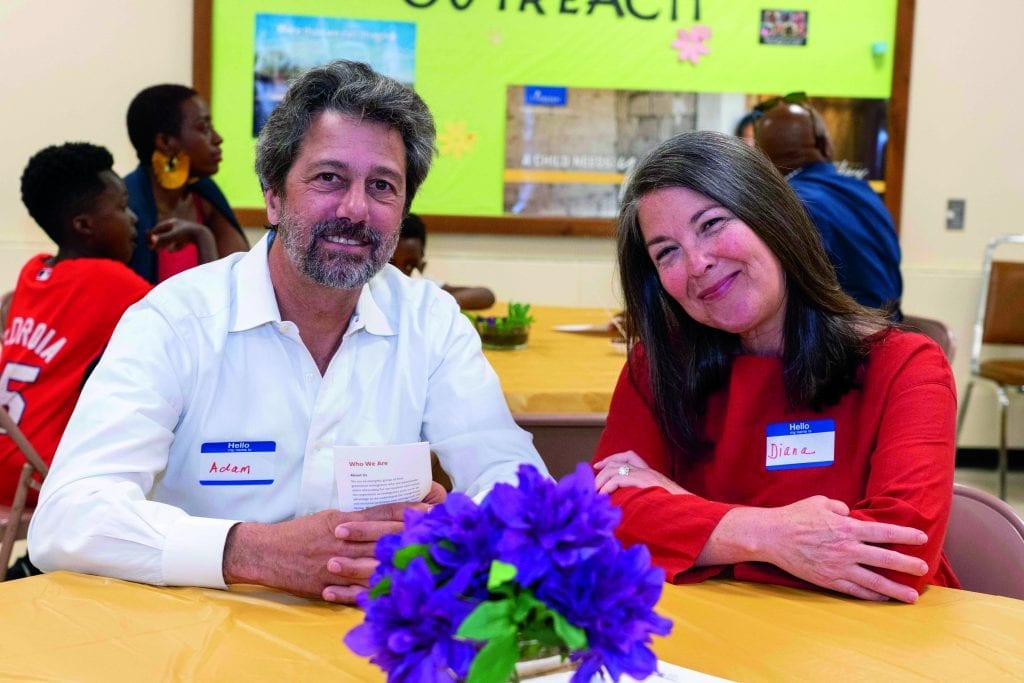 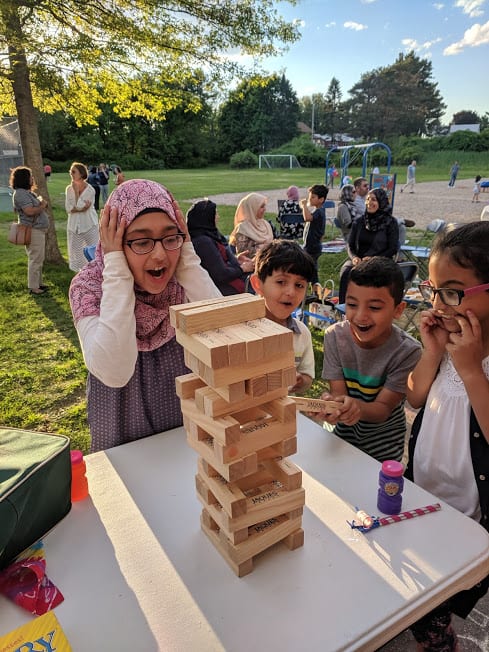 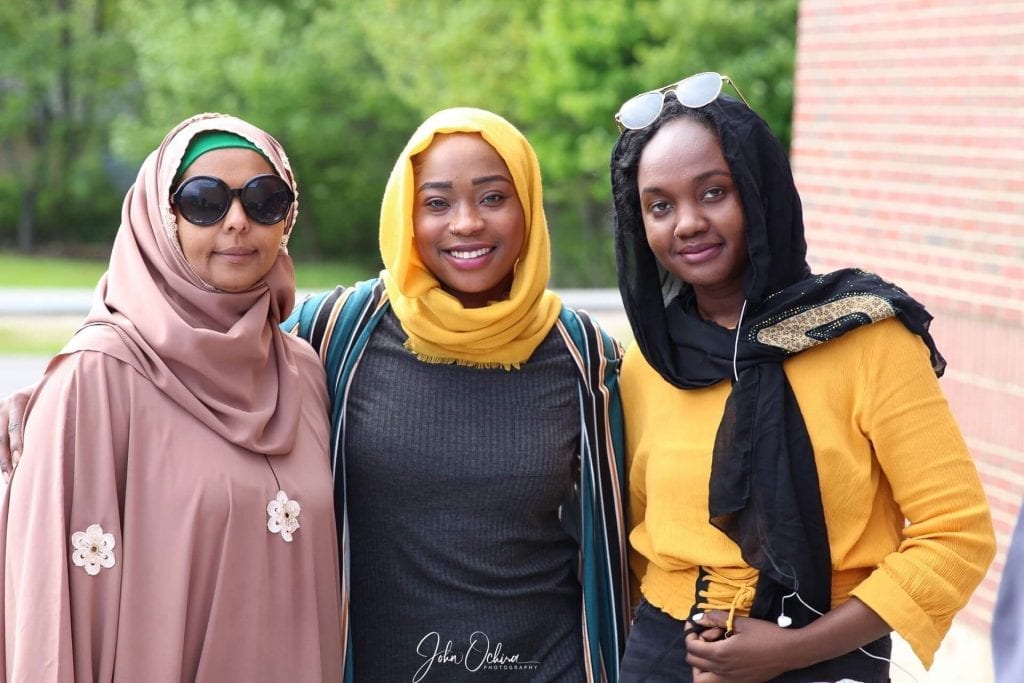 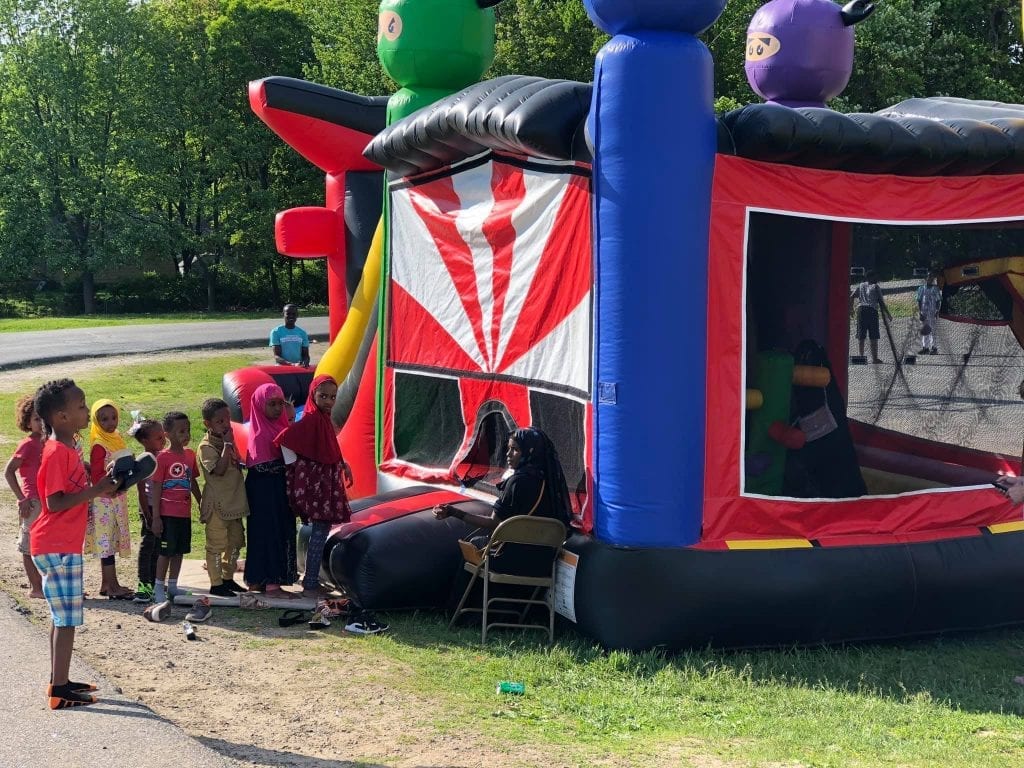