Promoting and spreading the music and food of West Africa: Messan Jordan Benissan

“As a student, my teachers inspired me to pursue a life-long interest in teaching,” said Messan Jordan Benissan, master West African drummer, musician, and dancer, and the owner of Mé Lon Togo Bistro in Camden. 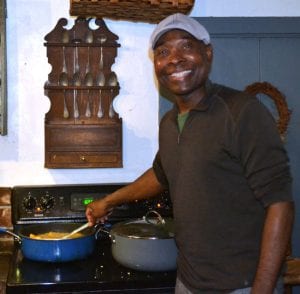 “There are a lot of kids in Togo, but not many teachers, so my original goal was to get an education and then to return to my Ewe community and teach in the grades where kids need help the most,” he said. As things turned out, Benissan’s mastery of West African music and dance and his love of his mother’s cooking have led to a life quite different than the one he’d envisioned. After receiving a Bachelor of Arts from the Institut des Sciences Commerciales in Lome, Togo, Benissan joined a friend who was studying at the University of Oklahoma, where he took graduate courses in the ontology of French literature.

As a young person, Benissan had received instruction in ceremonial dance and music, and training from master West African drummers. While going to school in Oklahoma, his friends discovered that he is an accomplished ethno-musicologist, with skills in the highly complex Ewe cross rhythms – and in dance. The chair of the university’s music department, impressed with his talent, hired him to teach music majors who were interested in African music.

“Teaching this music is very exciting for me,” said Benissan. “Most people don’t know that African music is a complex discipline, based on intricate African rhythms. I like that I am helping people understand this amazing music.” He added, “Many people in the U.S. are struggling with race relations right now. I find that teaching the music of West Africa allows me to connect with people and to open their minds and eyes. I think my music and food are helping with race relations.”

Benissan stayed in Oklahoma for four years, and while he was there, he and his students were asked to produce a celebration for Martin Luther King, Jr. Day. The performance was an overwhelming success, and after that, he received numerous invitations to perform at primary and secondary schools, colleges and universities, libraries, and community organizations. The residencies ranged from several days to semester-long in length. As Benissan received more requests, he stopped taking graduate classes and instead focused primarily on teaching and performing music.

After completing part of a semester at Westminster College in New Wilmington, Pennsylvania, he was invited to teach in Minnesota. “I was able to teach at the colleges and in the community, and to work with the Kofi Annan Foundation, an organization that helps struggling kids from poor neighborhoods, especially from Black communities, where conditions are sad and poor, and where – without intervention – kids fail. I was well received and felt welcomed and loved in Minnesota.”

When Benissan’s former wife got a job teaching at Colby College, the family moved from Minnesota to Waterville, where he has resided and worked for 20 years. For the first part of every week, he teaches music and manages a musical ensemble at the college, and in the second half manages Mé Lon Togo Bistro, his West African restaurant in Camden. Benissan has produced an internationally recognized album, “Let Me Play My Music,” that was featured on National Public Radio.

“Cooking and starting a restaurant are funny and interesting chapters in my life,” said Benissan. “My mother cooked for us when I was growing up. When I was at home, I spent time with my mom in the kitchen learning her recipes and how to prepare the food. In Waterville, I started making food for my family and friends.”

Benissan’s colleagues raved about his cooking. “Some of them told me, ‘You need to open a restaurant.’ So, eventually, I decided to try. I opened my first West African restaurant in Searsport, and it was a great success the first year – great reviews, great start. So, I decided to open a second restaurant in Waterville. Both locations did well until the pandemic hit. Then, with the state’s restrictions and [declining] customers, I had to close both places.”

Despondent about losing his restaurants, Benissan used social media to tell the story of what had happened. News spread fast through the “foodie” community and a food blogger and other restaurant owners reached out to Benissan, offering to help raise funds through an online GoFundMe campaign to enable him to reopen in Camden. Contributions came in from patrons, other restaurant owners, and community supporters. Entrepreneur and philanthropist Bettina Doulton provided funds to enable Benissan to advertise his food.

In July 2020, Benissan relocated and reopened Mé Lon Togo in Camden. “We had a good summer, but in October COVID spiked again,” he said. “Like other restaurants, we closed for a bit, but then we re-opened, and we are now offering takeout, dinner, and gift certificates.

The Future
“I love Maine and what I want people to know is that, in terms of the cuisine we have at Mé Lon Togo, we offer some of the finest West African dishes,” he said. “By opening my restaurant, I have been able to demonstrate to people from Maine and to those who come to Maine the gastronomic accomplishments of West Africa. I remain hopeful because a lot of people are beginning to notice Mé Lon Togo Bistro. Many people have let us know that they think the cuisine is a good addition to the area and people are spreading good reviews. I really enjoy what I’m doing right now. It’s a blessing.”