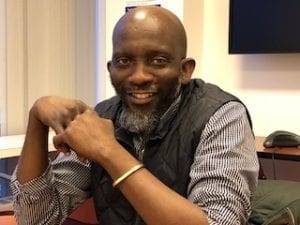 Pious Ali, Portland City Councilman At-Large, and Policy Associate for the Cutler Institute for Health and Social Policy at the Muskie School of Public Service, arrived in the United States from Ghana in 2000. He moved first to New York, where he planned to continue his work as a freelance photojournalist for magazines and newspapers. He remembers his first impression: “People look like they have wheels under their shoes in New York they move so fast!”

In 2002 he made the decision to come to Maine, where his first job was in the kitchen of a restaurant. He also worked in a store stocking shelves. Gradually his interests led him into work helping young people and other immigrants. Over the years he worked as a facilitator for Seeds for Peace and on the staff at Preble Street. He is the founder of the Maine Interfaith Youth Alliance and is currently working on launching a program designed to develop leadership skills in young immigrants. “I am hoping the program will create a pipeline for new leaders who are fit and ready to participate in important roles because they are educated here,” he explains.

Mr. Ali entered municipal government when he was elected to the Portland school board in 2013. At first he didn’t want to run for office. “When someone told me I should run for school board I said ‘I don’t want to’ but they just kept pushing until finally I said ‘yes’. Once I got on the school board I realized it was a good idea.” He stresses that while immigrants from certain countries in Africa may never have experienced what it is like to live in a system with a functioning government, here in Maine ‘the system is open’. Some immigrants have lived their entire lives in refugee camps, he notes. Their own governments did not help them, and they lived in camps that were like whole worlds unto themselves. For these immigrants a lot of adaptation has to take place in order to understand and trust government.

Pious Ali is passionate about the importance of civic participation. “You live here, you pay taxes here. If you don’t play a role others will make decisions for you that affect your lives.” Mr. Ali is working on breaking down barriers between elected officials and their constituents. One example of such a barrier is the format of municipal meetings. He points out that many people are not willing to stand up in City Hall and speak in front of a crowd of people in order to express their views. “It’s intimidating and frustrating and not everyone can do that.” He favors smaller, structured, more intimate conversations, and he will be announcing a series of these as election season approaches. He plans to invite candidates from both the democratic and republican parties to these meetings.

Mr. Ali has seen Portland change quite a bit since he first arrived in 2002. “Ten years ago, if you showed me the picture of an immigrant, not only did I know them – I had their phone number, their address, and even their social security number! Now if you show me pictures of ten immigrants I might know only four of them.” Despite the increase in the number of immigrants in the state over the past fifteen years Pious Ali notes that “… there are still pockets in the state – even here in Portland – where people have no idea who these immigrants are.” The City of Portland has been working hard to welcome immigrants, but there is more work to do. “Marginalized immigrant groups need to be able to tell their own story.”

Above all, Pious Ali talks about the importance of immigrants participating in the political process. “Your vote matters,” he insists. ‘Get involved! Participate! Let your voice be heard!”