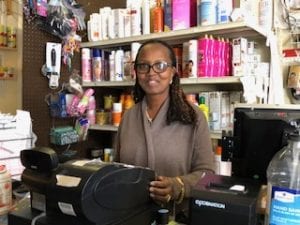 Lucie Narukundo, owner of Moriah Store, at 364 Cumberland Avenue, Portland, arrived in the United States as an asylum seeker in 2010. Born to a Rwandan mother and a Congolese father, Ms. Narukundo fled her homeland to escape the African Wars. Cheerful and gracious by nature, Ms. Narukundo talked easily and openly in English about her experience in Maine.

“I love the American people and I love this country,” she began. “American people will help you.” Ms. Narukundo says that when she first reached safety in the United States she was unable to speak even one word of English. She lived in a homeless shelter for several months, and with a friend for several months, before finally getting an apartment. “It was hard, very hard,” she says. “I couldn’t talk with people, I couldn’t eat American food – the food was all too sweet. I lived almost entirely on fruit. Everything was hard.”

Ms. Narukundo benefited from the help of American strangers. “They didn’t know me, but they helped me. They took me to the hospital when I needed to go, they helped me find food and a place to live.” Gradually she put together the pieces of a new life. First she worked as a housekeeper in a hotel. Then she took PSS training and CRMA training courses and worked in assisted living for three years. She studied English, crediting the teachers at Portland Adult Education with her proficiency. “You must get English if you move here or you can’t accomplish much,” she explains. She also made two good American friends through Adult Education, Becky and Barbara. She considers them so close they are family to her now.

When Ms. Narukundo fled Africa she had to leave her husband and nine children behind. As she found her footing in America she began to look for a way to get her family safely settled in Maine. She had seen families fragment under the strain of migrating to an environment very different from the one they had left behind and she was determined not to let that happen to hers. She was particularly worried that her husband, who would arrive in Maine with no English at all, would not be able to find a job.

After some thought she hit on the idea of an African store, reasoning that her husband could help with the store while he got his bearings. Through her networks she had heard of  CEI. She had been told that CEI helps people start businesses and provides special targeted programming for immigrants.  “If I am here in this store today, it’s through the CEI program. Through them I got training in managing a business, help with taxes, funding for starting up.” She opened the store in 2014 and almost four years later Moriah Store has clearly come to occupy an important niche in the community. A steady stream of customers makes its way in and out. One man, nostalgic for the orange Fanta soda he remembers from home in Africa, stops in just for that. Others fill bags with assorted groceries.

Ms. Narukundo works the cash register and talks with everyone who comes in. She is something of a magician with languages and speaks Swahili, Kinyarwanda, French, English, as well as numerous local African languages. She is justifiably proud of her store, noting that she carries everything from food to lotions to hair products. Some of her merchandise is delivered from Africa – by way of New York or New Jersey – then right to the store. However twice a month her family makes a trip to New Jersey to bring back frozen foods to stock the freezers.The walls of the store are lined with big chest freezers. They are packed with frozen goat meat, fish, cassava leaves and other vegetables from Africa. Crates of fresh plantains, tomatoes, yams, peppers, and various kinds of dried fish cluster at the front of the store. Shelves stretch front to back and are piled high with cans of fish, jars of spices, boxes of tea, and a wide variety of other groceries.

Ms. Narukundo is generally pleased with the trajectory of her life in Maine. Three of her five biological children are now in college and the fourth works for an insurance company. Another is about to graduate high school. Her husband has a job of his own now.  However she and her husband also have four children they adopted as orphans twenty years ago during the period of the genocide in Rwanda, and who they help support. These adopted children are living in Uganda and the family dreams of a time when they can all be reunited in Maine.

Ms. Narukundo advises newcomers, ‘Leave your fear behind’. She recommends studying, going back to school, signing up for training opportunities. She knows it is very hard to start all over again as an adult and says it can be especially difficult in some ways if you arrive with an education behind you. Many people who have been successful back home have trouble swallowing their pride and returning to school in their adoptive country. Yet she says it is imperative to do this in order to learn the ways of the new country and get the credentials needed for satisfying employment here. Above all, she stresses studying English.

Ms. Narukundo circles back in her conversation to the kindness of Americans. She says she once asked her caseworker, ‘What can I give back to this country?’ and was told about hospice work. She felt she was suited to the work. “During the African wars I saw many people die. I volunteered in a hospital in Africa during the troubles. I am not afraid of dying people.” So beginning in 2010, with one break of three years to focus on her family when they first arrived in Maine, Ms. Narukundo has worked as a volunteer hospice worker. She displays her hospice badge with pride while her face breaks into a broad smile. “I volunteer once a week now,” she says. Lucie Nakukundo, slight of stature, is clearly grand in heart and determination.