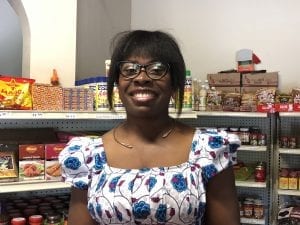 “My happiness is that the conversation has started about welcoming newcomers to Bangor,” says Angela Okafor, immigration lawyer and proprietress of Tropical Tastes and Styles International Market. “Something is beginning here.” Originally from Nigeria, Ms. Okafor moved to Bangor with her husband in 2008. At the time she had just completed law school in Nigeria. “In Nigeria, studying law was a challenge. Society expects certain things of women. But I’m not a rule-following person!” Now, eight years later, she has three young children, launched her own law practice in August 2016, and joined the board of the Maine Multicultural Center around the same time.
“Don’t say I’m crazy,” she remembers telling friends in late 2016, “but I’m thinking of also starting an African market.” After reflection she revised her idea a bit. “There is already enough segregation of communities in this state. I’m going to make it an international market!” She did just that, adding ‘business owner’ to her list of accomplishments. The Market opened in January 2017 and is now well-established in Bangor.
During the hour I spent in the store on a Saturday afternoon business was good. Along with regulars shopping for food products, a young couple with a small child who had just moved to Brewer three weeks previously, and who had specifically searched for an international market online, browsed the store, contentedly filling a basket with merchandise. Mykayla Hoggard, a young resident of Bangor, sat in the styling chair while Ms. Okafor, who learned African braiding in order to be able to offer the service to customers, deftly added dread extensions to Hoggard’s hair. 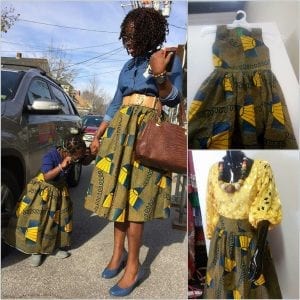 Life in Bangor has not always been easy for Ms. Okafor, especially in the early years. Fresh from law school, she was eager to find work as a lawyer. However, she found it impossible at first to get a foot in the door in the legal profession in Bangor. “Everything about me was questioned,” she said, and the ignorance of those interviewing her frequently amazed her. She was asked if there was anything in Africa other than the Sahara; interviewers let out that they believed Africa was a country, rather than a continent. Prospective employers did not take her education in Nigeria seriously. “I was given the runaround in Maine.” She was told she could not sit for the Maine Bar Exam without careful scrutiny of the content of every course she had taken in law school over a six-year period. Finally, she took the New York Bar Exam instead, and passed. Her firm, Okafor Law Practice, is based on immigration law, which is federal law.
“You can choose for hardship to either make or break you,” she reflects as she works on Mykayla’s hair. “Everything is about attitude.” Clearly Ms. Okafor’s attitude is positive – you can feel her energy in her vibrant greeting when you walk in the door of Tropical Tastes and Styles International Market. Her energy is infectious and the mood in the store cheerful. “I love to meet people and talk,” she says, smiling broadly, “and this is not just a business for me. It’s a place where I help people meet up, connect people to each other. To keep families in Maine the women need to be happy. They need access to services – hair care, food they like, African material and clothing.” Okafor believes that making Bangor a welcoming place for newcomers will rejuvenate the economy. She cites the recent example of a couple considering moving from Boston to Bangor for a job. The wife didn’t want to come, but then the husband came into the store and looked around, and that made a difference to them both.
The store is international, with products from all over Asia, the Caribbean, South America, Africa. She tries to help customers find the products and brands they miss from home. For example, she doesn’t offer just one variety of curry, but instead offers curries from India, the Caribbean, and Africa. When Ms. Okafor realized her customers had no access to African clothing, she bought a sewing machine and learned to sew. Now she has a product line that includes brightly colored African fabrics made into pants, skirts, and tops. When Mykayla needed extra hair for the hairstyle she had selected, Okafor ordered it for her. Through the Tropical Tastes and Styles LLC – International Market facebook page Okafor takes special requests. “Reach out to me and let me know what you need,” she says. “I’ll try to get it, and when I do I’ll send you a message that the product is in.”
Okafor says that her customers include locals. “People in the Bangor area are eager to try new things. They want to try foods with lots of flavor. And our food is mostly organic,” she says. “We don’t really use chemicals much in Africa. There is something for everyone here.”
Angela Okafor’s law firm website is www.okaforlaw.com and her market is at 347 Harlow Street, Bangor. She sees legal clients in the mornings and her market is open after noon, Tuesday – Saturday.