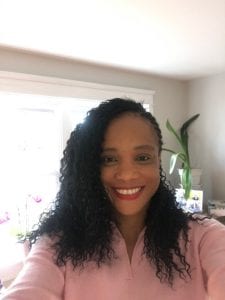 Magalie Lumiere Yangala was elected Portland Adult Education’s second representative to the Portland School Board in November 2019, and was sworn into office on December 2 at City Hall in Portland. Born in Lubumbashi, Democratic Republic of Congo (DRC), Yangala said she moved to Maine in November 2918. She never expected her life trajectory to include the U.S., and confided (in excellent English) that in fact she had no interest in learning English when she was growing up. “I was not good at English back home, and I slept through class! I wish my English teacher could see me now!”

Yangala spoke highly of PAE. “PAE has given a chance for a better future to people from 92 different countries. The teachers and administrators do a great job,” she said. She feels that her position as PAE representative is a great responsibility, and wants to use her position to help others, and give back to the school that has welcomed her and helped her so much.

She said that she is interested in listening to the concerns of students at PAE. She knows she wants to help find solutions to problems such as parking, transportation, and – most important of all – how to help those with advanced skills, such as civil engineers, architects, and electricians, transition into the U.S. workforce.

Xavier Botana, superintendent of Portland Public Schools, and School Board Chair Roberto Rodriguez clearly both think Yangala is off to a great start. “Magalie brings great energy and commitment to her Board service. She has been very active learning how the Board works,” said Botana. “She jumped right in from day one, bringing incredible energy and passion representing PAE. Right away, she began engaging in the Board’s work not only in our Business Meetings but also in committee work including Policy and Budget talks. I’m impressed by her eagerness to work with her colleagues on the Board, that she is committed to learning more about the district and how she can contribute to the work.”

Botana and Rodriguez both believe PAE serves a vital role in the life of the City, and emphasized the importance of Yangala’s position. “We added the Portland Adult Education student representative to the Board two years ago. It was in recognition that our Adult Ed program serves 4000 students every year and as such is our largest “school.” Over the past few years, we’ve increasingly come to see Portland Adult Ed as central to our equity work in the district. Many of PAE’s students are the parents of our children. The extent to which PAE helps them to achieve their learning goals will serve them, and their children well,” said Botana.

“I feel that unfortunately, Portland Adult Education sometimes gets left behind when we talk about Portland Public Schools, as often the conversations are centered around K-12 education. PAE is a true gem of Portland with offerings that have immense value to our entire city and its residents. Having a PAE representative on the Board and adding their voices to the district’s work is critical to ensuring we continue to grow and promote the value of adult education,” said Rodriguez.

Botana noted that the first PAE representative, Axels Sumuntu, was instrumental in getting high quality internet into the school as well as advocating for transportation assistance for students needing help getting to school. “He helped to keep PAE front and center,” said Botana.
Yangala said she plans to organize informational workshops on topics students have requested – an introduction to the laws of the U.S.; what it means to file a lawsuit; what 911 calls should be used for are three examples. She noted that students are hungry for information about life in the U.S.

She emphasized that investing in PAE brings benefits to Maine as well as the students. “We are future citizens – people who will eventually get work papers – and we want to bring good to the state that has helped us. Asylum seekers want to help Maine.”

She encouraged other new arrivals to serve in volunteer positions, noting that volunteering helps develop language skills, make connections, and fill the time waiting to be granted working papers with productive activity. She noted that volunteerism is not standard in Africa, and so many people don’t realize it brings benefits although there is no money attached. Volunteering is healthy, develops leadership skills, and can be lots of fun, she said.

March 3 will be a big day for Yangala – the day of her first report to the school board. She expects to be able to announce dates for three workshops following the March 3 meeting. Exuding optimism, with a twinkle in her eye, Yangala talked of her appreciation for the welcome she has received in Maine. “I fell in love with the City of Portland – with the people – but I am still trying to love winter!” she said.