Wednesday, August 14, at the Expo Building

With a final move-out deadline of August 15 for the asylum seekers who had been housed at the Expo Building in Portland since June 9, the atmosphere in the cavernous space on the afternoon of August 14 was charged. Community leaders moved from person to person to firm up housing plans in a race to beat the clock. Parents filled suitcases and talked together in earnest tones, their faces serious. Men and teenage boys pushed large baggage carts toward the side doors. Many hands worked together to load vehicles that would take families to their next stops on the long journeys to safety that had begun for them many months previously in Africa.

Kristina Egan, Executive Director of Greater Portland Council of Governments (GPCOG), whose organization was pivotal in convening the group that tackled finding home stay housing, smiled broadly as she stood back and looked at the scene in the Expo. 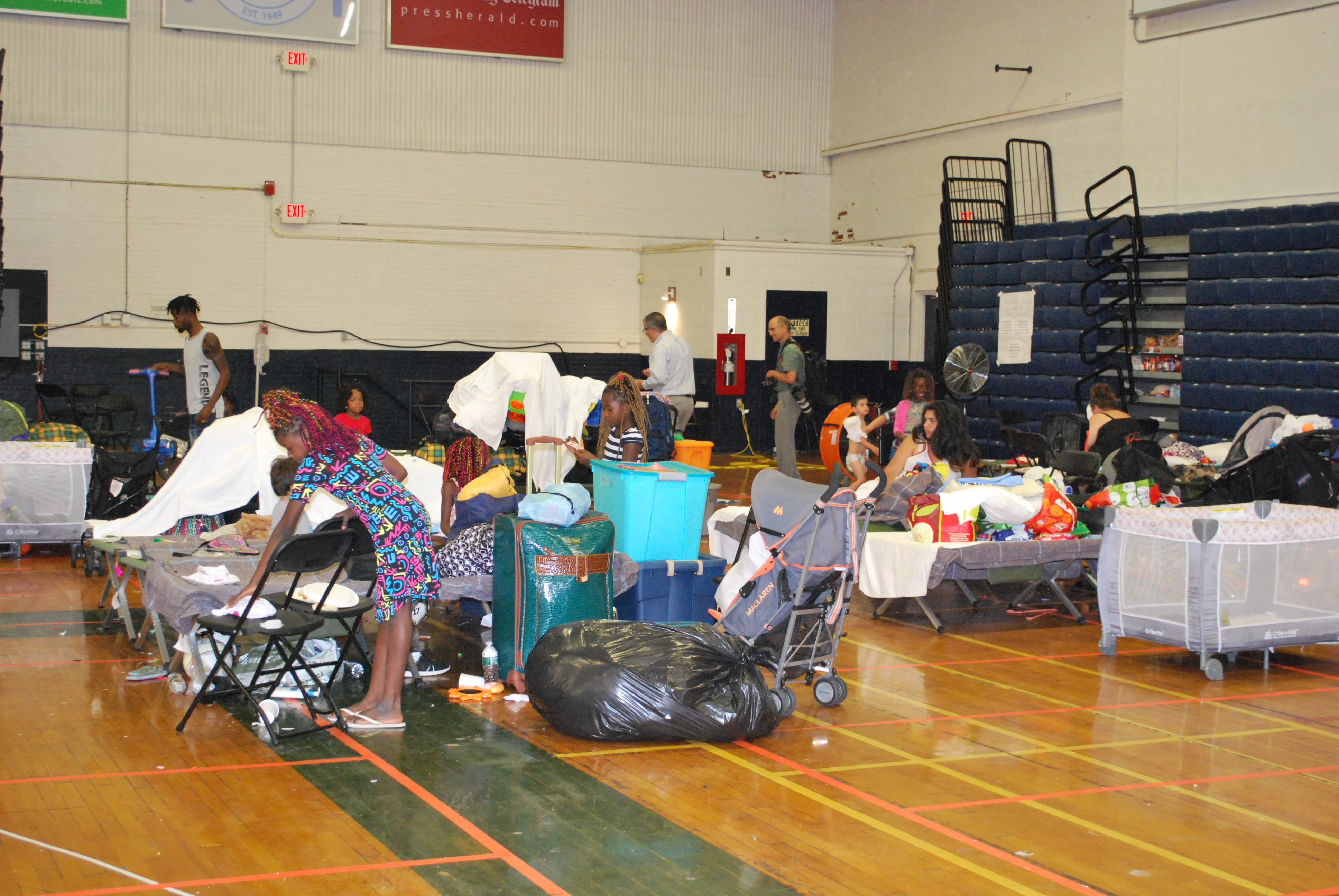 She said, “I’m so relieved. This is a really great day. So many partners have come together. Regional Transportation Program has been moving the families to their new homes. The City and immigrant leaders did a miraculous job of lining up wrap-around support.”

Children who had been living in close quarters with hundreds of other asylum seekers all summer took wild rides on a plastic car through the rapidly-emptying makeshift shelter.

A boy bounced a big purple ball across the floor; toddlers played in forts made from empty cribs tipped on their sides and draped with blankets; three pre-teen girls bedecked with elaborately braided hair sat around a game board they had made from cardboard. When asked what they were doing, they smiled broadly, and answered in clear English, “a game!” 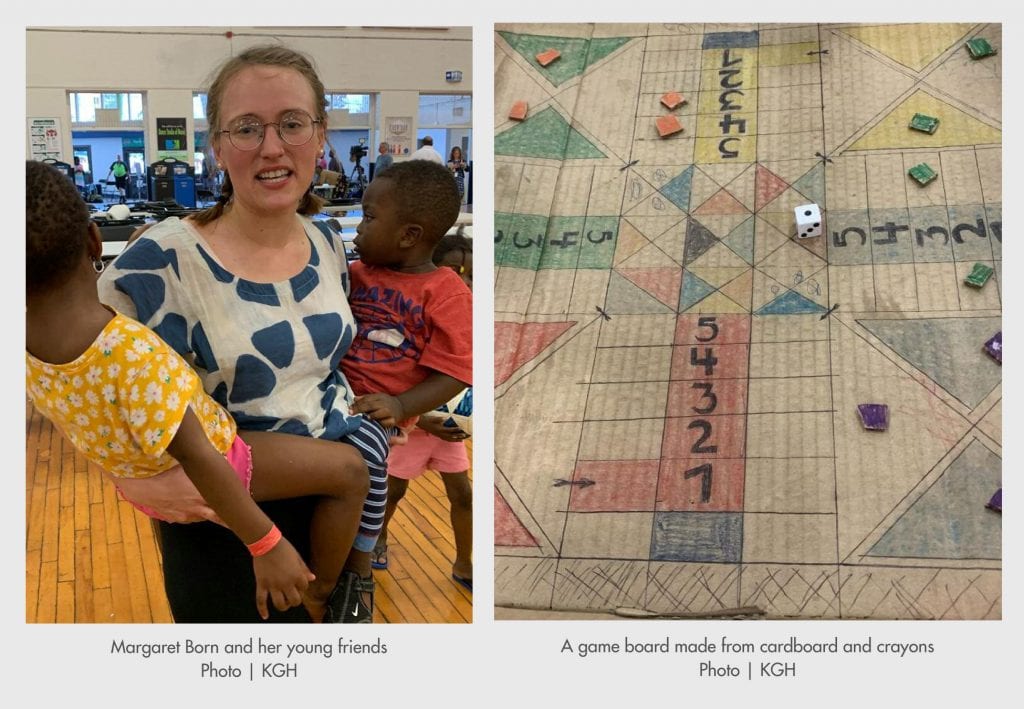 Margaret Born, who was raised in Mozambique, speaks Portuguese and French, and is studying International Security and Conflict, drove from New Hampshire twice a week and volunteered with the asylum seeker children all summer. She seemed in her element on Wednesday, with a smile that never left her face, twinkling eyes, one child in each arm, and others circling her. “This has been an amazing, compelling experience,” she said.

Women tidied their family’s areas – one cot per family member grouped together to define a space – many with tiny babies in their arms. One new mother, clearly exhausted, slept through everything on a cot, one arm flung back over her head, her tiny baby nestled in the crook of her other arm.

Two sisters, one pregnant, the other cradling a two-month old baby she had delivered by c-section after leaving Africa, fretted about the closing of the shelter, unsure where they and their families were going the next day. The sisters had not yet been offered housing, but had packed their bags nonetheless, understanding that they were obliged to leave the Expo by the next afternoon. They said that although they were grateful for the shelter, living with so many people had been challenging. The woman who had delivered by c-section pointed first to her abdomen, and then to the cot. “It was hard for me to sleep on that,” she said in Lingala. 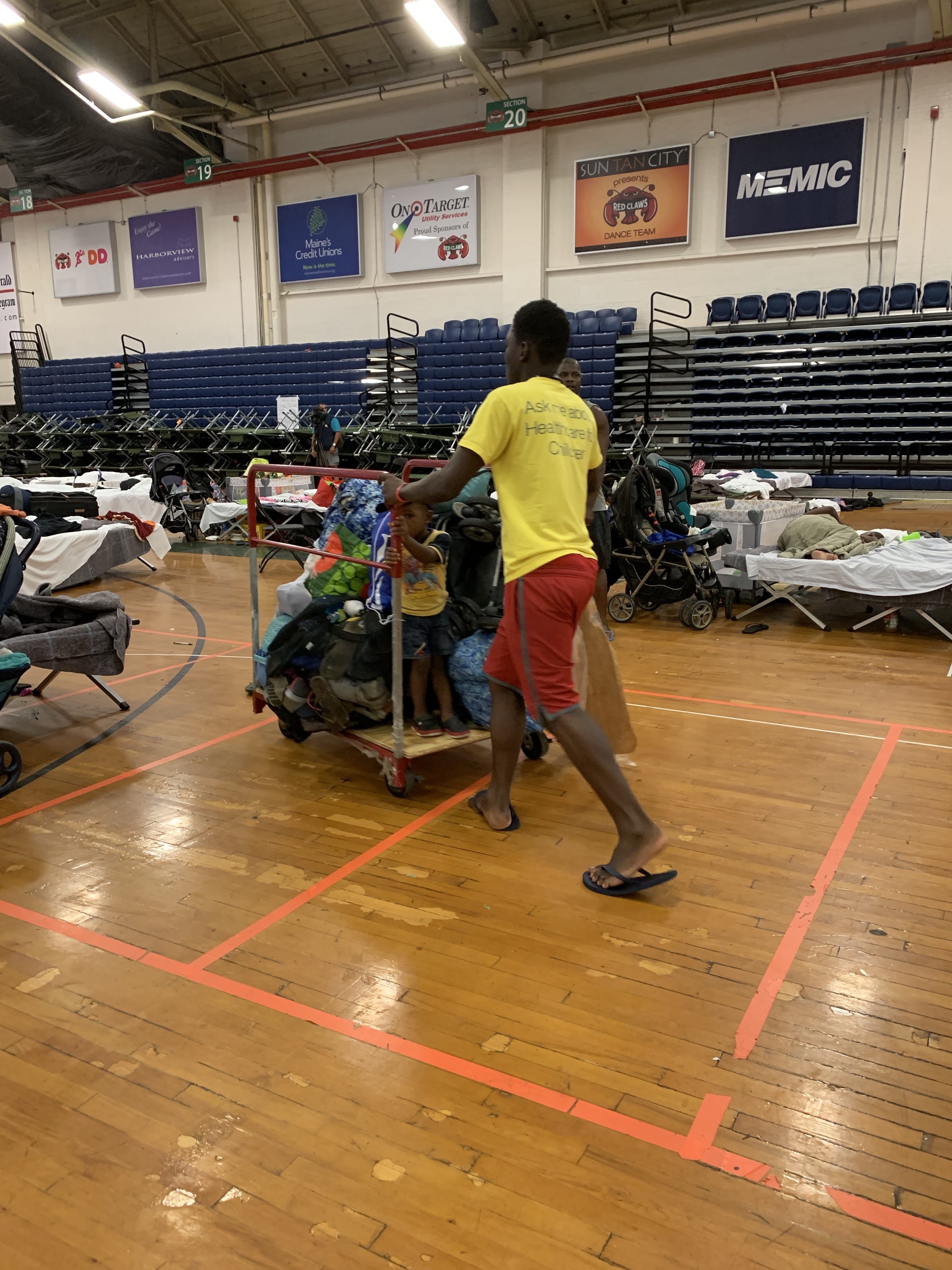 Moving out of the Expo Photo | KGH

Thursday, August 15 at the Expo

Trucks pulled up to the side door of the Expo Building throughout the day on Thursday, and by afternoon, all the families had moved out, right on schedule. 200 asylum seekers had been housed in units in Bath, Brunswick, Lewiston, Scarborough, and Portland, according to information released Thursday afternoon from Mr. Jennings, Portland City Manager. Many other asylum-seeking families had moved in temporarily with host families. Tom Bell, Public Information Officer at GPCOG, said that guests were staying with host families as far south as Saco, as far north as Durham, and as far west as Auburn, though most remained in Greater Portland.

The combined efforts of many organizations and individuals made meeting the move-out deadline possible. Mr. Jennings thanked the “amazing and dedicated (Portland City) staff who have worked around the clock to successfully manage this emergency situation,” as well as DHHS, Maine Housing, Governor Mills and her office, and the public at large “for their willingness to donate, volunteer, and provide housing.” 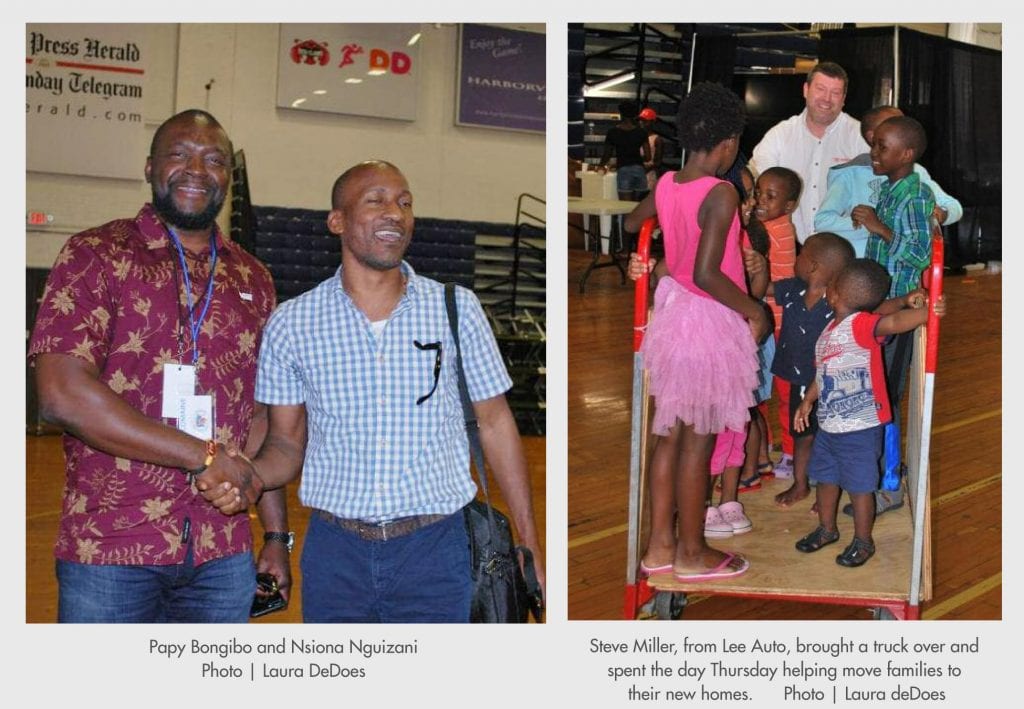 Maine’s immigrant leaders were at the hub of the effort to meet the needs of the almost 450 asylum seekers who arrived in Maine over the summer, and they seemed to be everywhere at once on Thursday at the Expo Building. Mufalo Chitam, Executive Director of Maine Immigrants’ Rights Coalition (MIRC); Papy Bongibo, President of CocoMaine, the Congolese Community of Maine, and Luc Samuel K. Kuanzambi, lead cultural navigator for CocoMaine; Nsiona Nguizani and Manuel Vemba Kiambuwa, President and Vice President of the Angolan Community of Maine, all played outsize roles in making sure the asylum seekers were well cared for throughout the two-month period that began June 9.

Earlier in the week, Mr. Bongibo drove a moving truck up to Lewiston. The truck was full of furniture that had been donated by the non-profit Furniture Friends to transform completely empty apartments into furnished homes for the families who had moved into units in Lewiston.  “Furniture Friends was a huge help,” Mr. Bongibo said, explaining that this effort was just one example of the outpouring of support extended by numerous non-profits and other organizations in Maine.

Asked how he himself was holding up, Mr. Bongibo said, “When I go home at night, I can’t even sleep, I’m so tired! This was the first time I have experienced 300 people all living together. It has felt kind of like a refugee camp.”

Maine Initiatives provided funding in July to hire project managers, social navigators, and drivers to help the immigrant leaders accomplish their work – and that made all the difference, said Papy Bongibo. “The volunteers during the early weeks were amazing, but eventually they had to go back to their jobs. With this funding, there have been people here at the Expo every day, Monday through Friday, to help the newcomers understand the American system, explain immigration papers, get people to appointments on time, and serve as translators,” he said.

As they packed up the Expo, city workers who had been stationed there all summer expressed pride at a job well done. Some were a little emotional.  “I’ll miss the kids,” said one city worker, who asked to remain anonymous. “They were a big help. They used to help us clean up every day. Whenever we had to break down chairs, one little boy would always be there helping. This has been lots of work, and it’s been long, but it’s also been a nice experience,” he said. “It’s a 100 year old building intended for games, events, and emergencies – which is what this was. And now it’s going to be used for basketball.” He explained that all three floors of the building would be completely sanitized before the Red Claws take occupancy in September. The workers have a busy few weeks ahead, but they expressed confidence that the building would be ready for the basketball season.

Seven families moved from the Expo to Brunswick Landing on Thursday. They were joining several other families who had moved in during July. The families were greeted by volunteers from The Emergency Action Network (TEAN), the Midcoast New Mainers Support Group. and Mr. Nsiona Nguizani, Brunswick’s first cultural broker, whose fourth day on the job was Thursday.

Mr. Nguizani had started his day with a coordinating meeting at the Expo Building.  By mid-morning he was in Brunswick, welcoming the first of the wave of families that continued to arrive throughout the day. He already knew the families, having helped them throughout their stay at the Expo. He helped them unload their belongings, and oriented them to their new units, all in Portuguese, French, or Lingala – he is fluent in all three languages, as well as English.

Mr. Nguizani was appreciative of the huge efforts put forth by volunteers in Brunswick. “You will see fifty people in and out of here by the end of today, all making sure the apartments aren’t totally empty,” he said. Both TEAN and the Midcoast New Mainers Support Group have extensive networks, and it seemed that no sooner had a need been identified and shared, than it was fulfilled.

Stacks of mattresses, tables, lamps, and bags and bins of cooking equipment filled the grassy green in front of the apartments by early afternoon. Carol Kalajainen, from the steering committee of Midcoast New Mainers Support Group, helped with the distribution of these goods, making sure each family received an equal share. 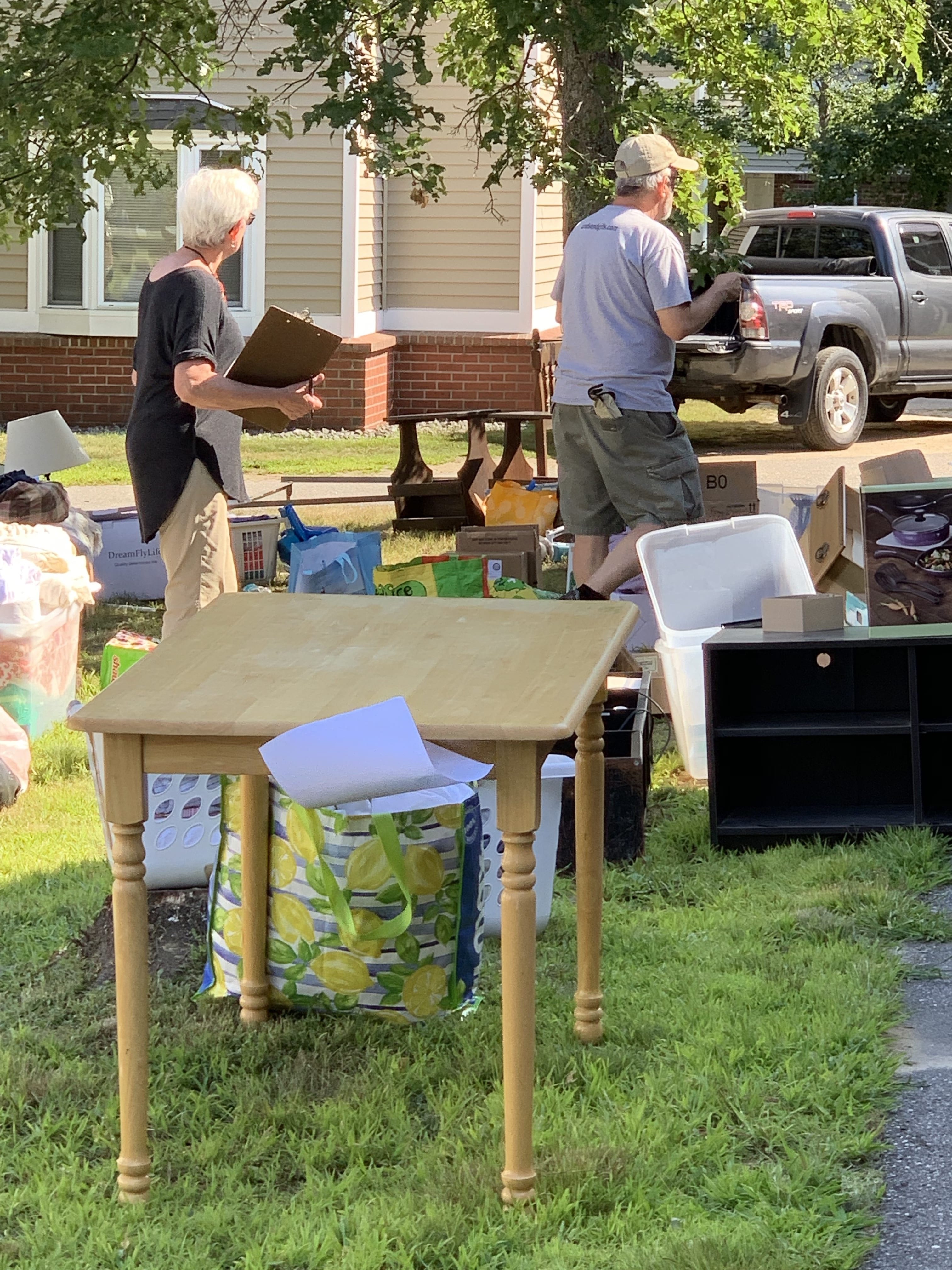 Donations poured in throughout the day   Photo | KGH

Two families requested a trip to the food pantry, to get ingredients to do some cooking, so Mr. Nsiona arranged for a volunteer driver to do that. The children  stayed behind, playing in small trees, running across the grass, enjoying the fresh air. Because the parents already knew him, they felt fine about leaving the children with Mr. Nguizani and the volunteers, so they could concentrate on stocking up.

By the end of Thursday, all the families had arrived – including the sister with the two-month old baby who had been wondering just the day before where she would be moving. Two African women arrived on foot, and exchanged hugs with the children playing outside. The women are living near Brunswick Landing, and were among the first asylum-seeking families from the Expo to be housed outside of Greater Portland. Their smiles showed their pleasure in seeing their community grow. 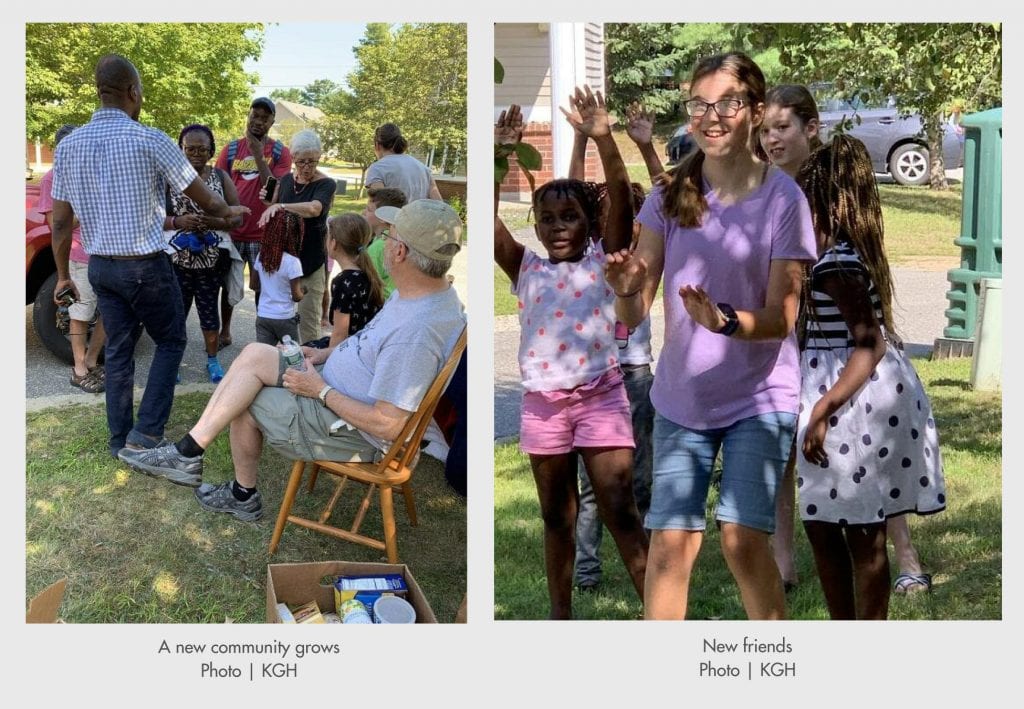 Mr. Nguizani’s plans for the first days include individual orientations to the apartments; getting the adults and children started with English classes; filling out paperwork, and scheduling appointments for each family.

“This is unprecedented. The challenge is big. But I like challenges, and what I’m doing is working on developing a model that can be replicated elsewhere. You have to start by looking at the needs of the people, and work outwards from there,” said Mr. Nguizani.

Susan Pate, a resident of Brunswick Landing, came out with a big smile on her face to meet her new neighbors. “I am so proud of Maine to see all this support in the midst of the terrible things we constantly hear about in the national news. To get more diversity in Brunswick, and be part of a community that is welcoming, feels great. I’m excited!” she said.

By four o’clock on Thursday the move out of the Expo was complete, and a dozen Maine towns and cities had joined Greater Portland in welcoming new residents. Asylum seekers have made their way to Maine for years – and continue to arrive – but this summer’s wave was bigger than usual. Maine has earned national attention for the welcome it has extended this summer toward the newcomers. If Brunswick’s greeting over the past month is any indication, there is every reason to believe their response will be replicated in other towns and cities as the newcomers move into residential neighborhoods, start school, and become part of their new communities.