On being a Black woman in Maine 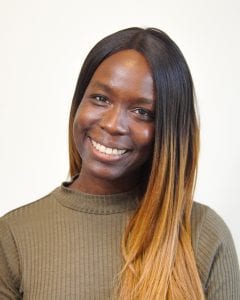 Hi, my name is Victoria, and I really want to tell my story. I know I may not look like it, but I am a local Mainer. And I’m really proud of it. I was born in Miami, but I was adopted when I was only a few weeks old, and have been in Maine ever since. Some of my favorite pastimes include eating steamers at Harraseeket, ice fishing on East Grand Lake, pizza and fries from the Old Orchard Beach pier, and soaking in the amazing scenery as much as I can. I love this state, and for the most part, it has always loved me back.

However, that’s not to say that being a Black woman in a very white state does not come with its own set of difficulties. It wasn’t until I began school that I realized how different I was – I was the only Black person in school for years, and the questions were endless. I’ve been asked why I don’t bruise, if I feel pain the same way a white person does, what it’s like to be a slave, and a variety of other shocking questions.

While these uncomfortable comments and questions would most often end with me crying in the guidance counselor’s office or on the school bus, I did have a great group of friends. I trudged forward to middle school and high school, where I was one of maybe six Black students at that point. The comments took a more severe turn, as everything in high school seems to do, and while I look back on my time fondly, I was not spared from the racism that seeped in.

I was compared to a zoo animal – a monkey or an ape are the most common names I’ve been called. I’ve also been compared to food – a tootsie roll, a chocolate cake, and burnt toast, just to name a few. And I’ve been on the receiving end of relentless bullying about my hair, how I speak, and how dark and undesirable my skin color is, among many other things. It was in high school that I realized it really didn’t matter how nice I was, how well I did in school or out on the soccer field, the color of my skin was always the topic, and it was hard to form an identity outside of that.

All of the micro and macro aggressions, however, pale in comparison to being called the N word, which has been said to me on multiple occasions here in Maine, as a kid, and even now, as an adult. In my experience of being called this word, it’s almost always from a complete stranger, and weirdly enough, it seems to always happen when I’m in the best of moods. The scenario really hasn’t changed much, and normally consists of me, out with friends, minding my business, crossing paths with someone in Maine, at that moment, who is disgusted by my presence, and deciding I am too Black to exist in their white space.

I’ve been in scenarios where the N word has been said directly to my face, or just loud enough that I hear it and see the laughter directed at me when I lock eyes with the person who said it. Each time, my night is not only ruined, but so is my self-esteem. I spend days building myself back up again, comforting myself with reminders that the person had too much to drink, or was just trying to show their boldness in front of their friends. I convince myself I am not that word, and while that particular person ruined my night, there are many others in this state that love and support me. It helps numb the pain, and after a few days I always bounce back. However, I unfortunately can never forget the incident, and it joins the reel of the countless other experiences of racism that I make a mental note to try and move on from.

I remind myself it is not Maine as a whole, it is just a few people who live here, but the paranoia does seep in as I run my errands the next day, and thoughts of whether or not I belong here start to take shape in my mind. Does everyone hate me here? Will I ever be more than just a random Black person that nobody wants to get to know? Will I always be judged for my skin color, which is entirely out of my control? Whenever I tell people about the times I’ve been called a slur, or just experienced racism in any form, the response is often the same – what they, a white person, would have done if they were me, which most often includes some type of altercation.

“Did you get in their face?” they ask. “Did you get physical? Because I would have gotten physical. That’s not okay!” I smile, and nod, allowing them to be the hero of the scenario they’ll likely never be in, at the same time envious that they have the luxury to even consider any type of altercation as a viable option to combat racism. I then share my response, asking them to set the scene with me – imagine me, getting in a white person’s face, screaming and yelling. My race has been historically and constantly judged as aggressors. As thugs. As animals. The cops would be called in, and given what we’ve seen play out between police officers and Black Americans, I’m not entirely confident about how the scenario would end, or if I’d live to tell you about it.

When I experience racism here, I am angry, yes. But as a Black woman, I have to make a conscious effort to keep myself composed. I have to be strong enough to be taken seriously, but light enough not to be labeled as the “angry Black woman.” I have to be tough enough to respond firmly to racist behavior with my words, but not so tough that I am threatening, because we’ve all seen how things go when Black people are assumed to be threatening. Being Black in a white space is a balancing act of emotional steadiness that I work hard on. I can’t just get mad and upset without that turning into a potential situation. Black people have been murdered for much less than yelling at someone, and my mind is always on the “what ifs” before the scenario itself can even unfold.

When it comes down to it, it really doesn’t matter how much flannel I wear, how often I rock my Bean boots, or that I can proudly eat lobster without needing a bib or instructions. I look different and I am a different race, so to some people here, I will immediately be summed up as the enemy. The stares and the comments will always happen, and asking my white friends to accompany me inside stores I’m not familiar with will always happen. But I dream of the day I can just blend in to this community. I dream of the day I can just be like everyone else. The day my skin color isn’t seen as an immediate threat. It should not be a negative mark against who I am as a person, before I can even open my mouth to introduce myself.

I want to be comfortable driving past law enforcement without a pit in my stomach, especially at night. I want to be able to call them, and KNOW that they will protect me, and not confuse me with the perpetrator and kill me before I can even get a sentence out to explain. I want to be equal, and I have wished for it my entire life. And yes, on a technical level, Black and white people are equal. We can both vote. We can both own property. But think of all the Black people you know, and the ones in your community. Do you really feel that we are equal to you? Do you really feel like you’ve actively made space for us, and feel that we are all one within the community? Do you really feel like there’s been an active acceptance? While I still haven’t learned how to respond to the racial slurs I receive, and will continue to be told “go back where you came from” by random strangers, Maine is my home. Just like you, I grew up here. Just like you, I love this state. And just like you, I belong here. I hope you will open your mind, and open your heart, and accept that. There is room enough for the both of us. Not just the both of us – there is plenty of room for ALL of us. I really look forward to the day when my skin color is respected and supported by everyone I meet.

Victoria Pelletier is the Special Projects Coordinator at Greater Portland Council of Governments (GPCOG). Along with other responsibilities, she takes the lead in working with the staff at GPCOG to address and highlight topics of racial equity. This essay was first presented in a July 8 webinar on racial equity, available on the GPCOG and Amjambo Africa websites. https://www.amjamboafrica.com/video-the-role-of-local-gevernment-in-advancing-racial-equality/ Also appearing in the same webinar were Claude Rwaganje and Bill Webster.