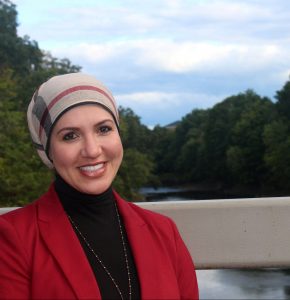 In November, Bangor-based Northern Light Health, which operates 17 health services organizations throughout Maine, hired Marwa Hassanien as its first Director of Diversity, Equity, and Inclusion. Northern Light President and CEO Tim Dentry had created a Diversity, Inclusion, and Equity Council during the summer of protests over the murder of George Floyd in Minneapolis. In her new position, Hassanien leads and supports the 20-member council, which is comprised of physicians, nurses, and leaders within the Northern Light organization from across Maine.

“They had already started doing diversity and inclusion work, but they wanted to create this position to ensure that this work of promoting social and medical justice ideals was truly on task and sustainable,” said Hassanien. With a stated goal of “embracing, promoting, and advancing social and medical justice,” the council wanted to help define this for people of Maine, especially within healthcare.

“We are having very important conversations,” she said. “Sometimes there is discomfort when having these discussions, and it can affect the productivity of organizations. As community leaders, we must not hesitate to have these dialogues in order to address underlying and systemic issues relating to bias, inequity, and racism. I am very comfortable addressing them, and hopefully, I can help people feel more comfortable, too.”

Hassanien’s first day on the job entailed remote meetings with Northern Light’s senior leadership from around the state and the human resources directors with whom she now closely works. Her current task is setting up foundational DEI training for the organization’s 12,000 employees. In the midst of the pandemic, working remotely via Zoom will allow Hassanien to reach many more employees in a shorter time frame than if she’d needed to travel to locations from Portland to Greenville to Presque Isle.

One of the council’s priorities has been to change the face of Northern Light’s advertising. “We now have a lot more people of color, people of religious diversity – I was pictured with my hijab – and LGBTQ family pictures. We are trying to showcase the diversity within our Northern Light family, using actual photos, not stock photos,” said Hassanien. “We want images of real employees who are presenting all different social identities.”

She also has been leading conversations about personal commitment to transformation. “It’s not just the employees. We’re starting from a commitment from the very top, the senior leadership, all shareholders, and folks on the ground, as well.” The words of CEO Tim Dentry have resonated with so many, she said, “and they’re believable because he has taken actionable steps.” One of Dentry’s initiatives is the new “Tim Talk” podcast, which he began in July as a means of breaking down barriers by focusing on topics of diversity and social and medical justice. “That is extremely important,” Hassanien said, “because he touches on the difficult conversations that people dance around and don’t want to have.” Topics have included “White Fragility and Microaggressions,” “Reflections on the Role of an Ally,” and “LGBTQ+,” among others. Dentry has made clear that he wants this attention to diversity to be sustainable, not something that Northern Light is doing because it’s a current trend that dies off, she said of his attention to diverse representation, social justice, and medical justice. Hassanien points to Dentry’s experience living in Abu Dhabi and Addis Ababa. “This is someone who has international experience. He gets it.”

Born and raised in the U.S. as the daughter of Egyptian immigrants, Hassanien “gets it,”  too. “What’s unique about my approach to DEI is that it’s in line with my unique, diverse background – being an educator, a Muslim, a daughter of immigrant parents, and as an American.” She incorporates mindfulness from her background with also being an American. “Living here in Maine, a predominantly white state, I can see how whiteness and white privilege can manifest itself in our community. I think being bicultural and bilingual helps me see things from different perspectives and angles.”

Her current role at Northern Light is an outgrowth of Hassanien’s volunteer DEI work for the last 10 years. She has spoken to many different organizations, and has conducted trainings for Northern Light, Bangor area school districts, and area police officers about interacting with international individuals and people of color. A member of the Maine MultiCultural Center board of directors, she also is a board member of the Auxiliary of the Penobscot County Medical Society, where many members came to the U.S. as J-1 visa holders, as did her husband. “They feel like fish out of water. I’m able to place myself in their shoes, and ask, ‘How do you want us to help you?’ ” In 2019, she was elected to the Bangor School Committee, where she has helped initiate a Diversity, Equity and Inclusion committee for that body, as well.

After doing so much DEI work based on her lived experiences and those of others, Hassanien wanted more education to learn about DEI terminology and evidence-based research. So she enrolled in and completed a workshop through the Racial Equity Institute. She also has enrolled in a Yale University DEI course to become certified. “This is my calling,” she said. “This is something I have been passionate about for the last 10 to 15 years. It’s passion and compassion, together.” She’s found her calling, and that’s helping Northern Light Health forge a path toward equity throughout Maine.