Portland has had a tradition of receiving and welcoming asylum seekers, but we’ve never had this situation before, with so many people arriving at once. I am proud of the City Council, city staff, other cities in the greater Portland area and all the non-profits that have responded so swiftly in order to support our new neighbors — as well as the Governor for extending her support. – Pious Ali 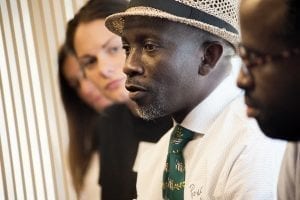 HOUSING
With an August 15 move-out deadline looming due to prior contractual obligations at the Expo Building, and an affordable housing crisis that has been intensifying for years throughout Maine, Portland city and community leaders have drawn together a strong coalition to locate housing for the asylum seekers who have arrived in Maine since June 9. According to Jessica Grondin,  Director of Communications for the City of Portland, that number has now reached 414 people. Newcomers continue to arrive, with 25 more getting off the bus in Portland last weekend. It’s “all hands on deck” as the deadline nears.

Kristina Egan, Executive Director of The Greater Portland Council of Governments (GPCOG), convened the coalition, which includes immigrant leaders, faith organizations, representatives from the City of Portland, Council on International Educational Exchange (CIEE), Maine Housing, Avesta Housing, and the Compassionate Housing Initiative in Yarmouth. Ms. Egan said her staff has pushed other projects aside to focus on this high-profile, public emergency.

“We’ve been happy to do that,” she said. The group has launched “Host Homes,” one important arm of an overall housing plan that also includes moving some families into rental units in the next few weeks, as well as after seasonal housing stock traditionally opens up at the end of the summer season. Host Homes has begun to match asylum seekers with host families to provide short-term housing for some families. Immigrant leaders involved in crafting Host Homes include Pious Ali, Deqa Dhalac, Papy Bongibo, Mufalo Chitam, Claude Rwaganje, Micky Bondo, Nsiona Nguizani, Baba Ly, and Claudette Ndayininahaze. 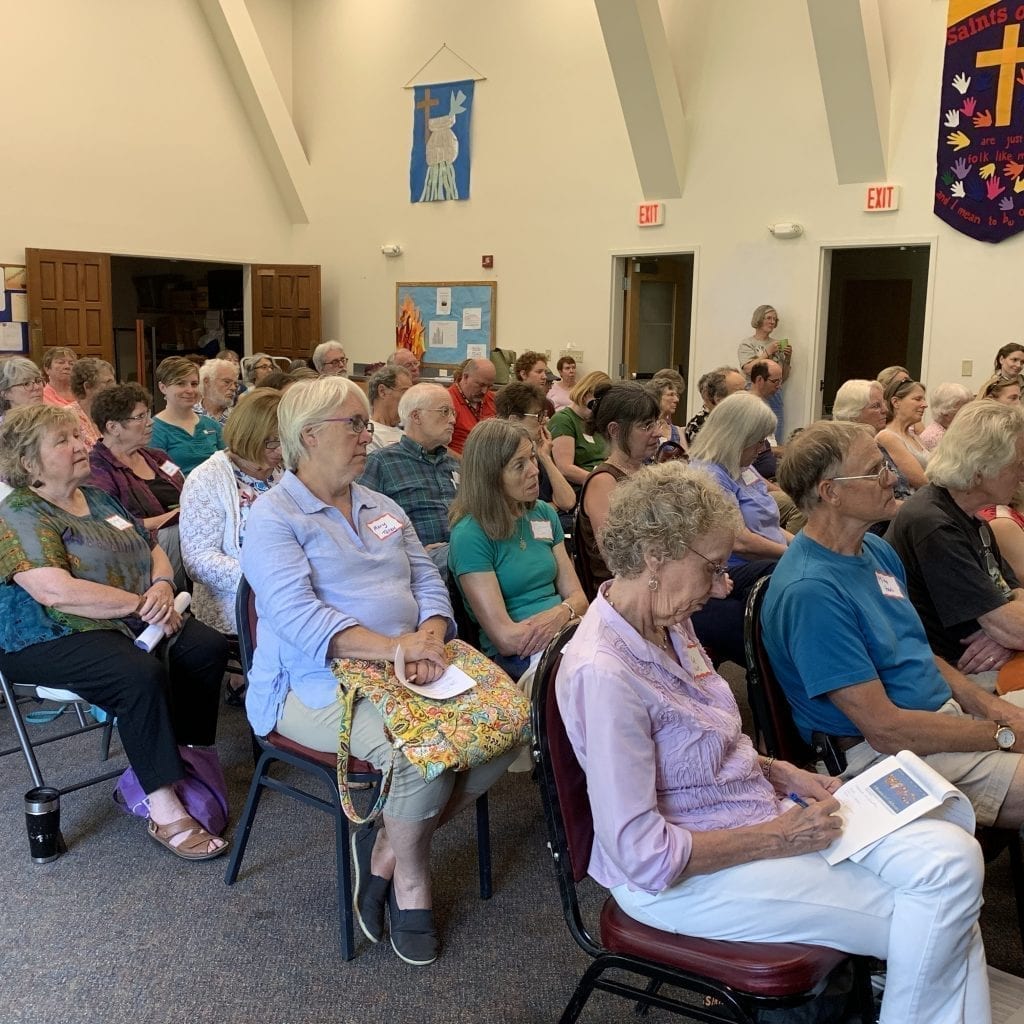 “We are seeing significant movement on the volunteer hosting front,” said Chris Hall, Director of Regional Initiatives and General Counsel of GPCOG. As of July 30, 60 host families had been screened by CIEE, and immigrant leaders had begun meeting with these families to implement the matching process. “GPCOG’s job is to keep the pipeline moving,” Mr. Hall said. His office is developing a list that they hope will be sufficient to meet both current and future needs.

Because of the housing shortage in Portland, some families of asylum seekers are being offered housing outside of the Portland area. So far, families have moved to Brunswick, Bath, and Lewiston. Some asylum seekers at the Expo have expressed anxiety about living outside of Greater Portland, without easy access to transportation, immigration lawyers, or friends and familiar services. Despite their anxiety, they understand that housing is limited, and that Portland does not have enough affordable housing for all of them to live in apartments in the city right away. Mr. Hall said, “If families who initially leave Portland wish to return, they should feel secure in knowing that their friends and service providers will not forget them. They will still be there.”

Volunteers have stepped in to help the families get established in different towns and cities, and some community members who cannot host have offered transportation and other help. Cultural trainings have begun to help local residents and newcomers get to know each other. Brunswick was the first city outside of Portland to house people from the Expo, and asylum seekers who have moved there told immigrant leaders they love their new situation. They say they are sleeping well, and that it feels great to be in a house.

Ms. Ndayininahaze, a cultural broker and co-founder of In Her Presence, said that cultural orientations are key for those families that move into areas without an established African community. In Her Presence, Catholic Charities, Greater Portland Family Promise, and the City of Portland have already begun leading orientations to help mitigate fear of the unknown on the part of both immigrants and their hosting communities and families. Ms. Ndayininahaze emphasized that small-group orientations work best. The plan is to “follow the families as they move into the community to continue cross-cultural support, to involve schools and neighborhoods, in order to build relationships and trust. Resources is one thing, but the social component is crucial,” she said. Carolyn Graney, program coordinator of Hope Acts, encouraged towns welcoming African newcomers to set up a community center staffed by volunteers, where newcomers can gather, immigration lawyers can meet with clients, cultural trainings can take place, and people can build community.

According to Ms. Ndayininahaze, cultural trainings should include a focus on food preparation. Those staying in host homes will want to know specifics of whether the kitchen is available to them all day, or at certain times only, and when they should cook dishes that may take many hours on the stovetop. Those living at a distance from stores that sell ingredients used in African dishes will need help getting to those stores on a regular basis. In Portland, those stores include Save a Lot on St. John Street; Moriah Store on Cumberland Avenue; Hannaford on Forest Avenue; and L’Africana Market on Brighton Avenue (which offers delivery service). Lewiston has a wide range of stores on Lisbon Street.

To learn more about becoming a host family, visit: https://www.host-homes.com
If someone has a rental unit(s) or a property, please contact the City of Portland’s Social Services Division 207-775-7911.

ENGLISH CLASSES
The first formal English classes for the adult asylum seekers staying in the Expo Building took place July 22. Organized by a year-old English as a Second Language (ESOL) collaborative convened by Julia Trujillo of the City of Portland’s Office of Economic Opportunity, the month-long program is a team effort. Members of the organizing team are Hope Acts, Portland Adult Education, Learning Works, the YMCA of Southern Maine, In Her Presence, Salvation Army, the Children’s Museum of Portland – all organizations that teach English, along with their other programs. Carolyn Graney of Hope Acts, Claudette Ndayininahaze of In Her Presence, Valerie DeVuyst of Westbrook Adult Education (formerly of Portland Adult Education), and Julia Trujillo were all on site July 22 to make sure the program was properly launched. 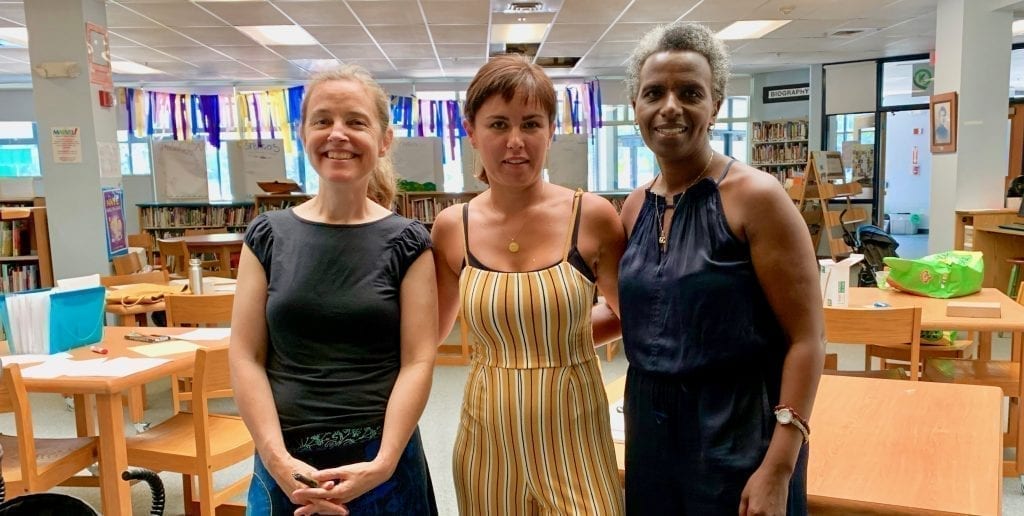 The program is designed to give the asylum seekers a boost as they prepare to move out of the Expo and into Maine communities. The collaborative organized the class location, the schedule, volunteer teachers, childcare, and a curriculum. When they issued a call for volunteer teachers, they very quickly received dozens of responses. Sixty volunteer teachers have now been trained in the curriculum the collaborative agreed was the best one to use. Volunteer interpreters in French, Portuguese, and Lingala are on board to help as well. Each class is led by a three-member team that includes experienced English teachers and an interpreter, and each class will meet twice a week for two hours per session.

The focus is on oral communication, and the program will continue for four weeks. Childcare has been organized on site at King Middle School by the Children’s Museum of Maine. Volunteers from the United Way list are helping as well.
Older children who are staying at the Expo have been attending the district’s summer programming, which began July 8. Between June 24 and July 3, the Multilingual Center’s intake team of the Portland Public School registered 65 children in Grades K-12.

LEGAL INFORMATION
One of the biggest challenges for the newcomers will be facing immigration court. Asked to weigh in with advice, Julia Brown, Esq., Advocacy and Outreach Attorney at the Immigrant Legal Advocacy Project (ILAP), said, “People seeking asylum should only have an immigration attorney help with their asylum case. The Immigrant Legal Advocacy Project is providing legal information and resources to newly arrived families.”

The Governor of Maine announced a new rule about General Assistance (GA) on July 18, 2019. GA is a program in every Maine town that helps people who don’t have enough money to pay their necessary expenses. GA gives vouchers (not cash) to pay for housing, food, and other basic needs.

This new rule means that you are eligible for GA if you have:
• a Notice to Appear (NTA) from immigration officials saying you will need to go to immigration court,
• AND are planning to apply for asylum.
Bring a copy of your NTA with you to the GA office. If you have already completed a change-of-address form or have received a hearing notice, bring copies of those, too, if you have them.
• If you have an NTA, you do NOT need to file your asylum application to get GA benefits.

Since this rule is so new, it is possible that you may hear something different from the GA office. If you have shown them the papers listed here and are denied GA, please call Maine Equal Justice at 207-626-7058. Maine Equal Justice is a nonprofit organization and not a part of the government.

If you are planning to apply for asylum but do not have an NTA, we will provide further information about what to do when we receive more information from Maine’s government.