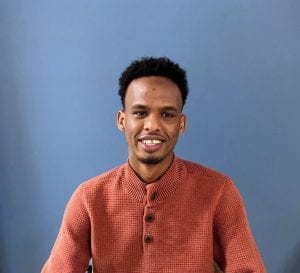 Mohamed Awil arrived in Maine in 2009, on a cold, wintry December day, fresh from a childhood spent in Dagahaley Refugee Camp, Kenya. He was born in the refugee camp in Kenya after his parents fled Somalia because of civil war. Dagahaley is one of four camps that make up the Dadaab refugee complex, the third largest refugee camp in the world. Mr. Awil, his parents, and nine siblings were resettled in Maine when Mr. Awil was 13. “The cold shocks you at first,” he said, recollecting his arrival with a big smile on his face. “In Kenya, temperatures were around 100 degrees most days. But I’m not shocked anymore. I’m a Mainer now.”
Mr. Awil is thankful to his adoptive state for welcoming him and his family, appreciative of the many opportunities he said have come his way, and grateful that he has food to eat, when “so many don’t have food on their plates.” Asked what he hopes for in the future, he said his ambition is to give back to the community that has helped him. He currently works full-time as the executive assistant of Gateway Community Services, where he oversees daily activities at Gateway’s three locations – in Portland, Lewiston, and Augusta. As the website explains, “Gateway was formed to support and empower all people who are suffering from mental anguish, trauma, emotional distress, and other evidence of social instability.” Mr. Awil is not a clinician, but “oversees everything else at Gateway.” In addition to working full-time, he is also a student at the University of Southern Maine (USM), majoring in Social Sciences and Business. He said it has been challenging to work full-time and also go to college, but added, “I have almost all my credits, and I love challenges. That’s how I got where I am.” He credited USM with being a very diverse school that takes good care of students.
The young man reminisced about his high school years in Maine. He said his English was very limited when he arrived, and school was difficult, but teachers helped him out. “For new immigrants, writing a paper is really like writing two papers, because first you have to write the paper, and then you have to translate it,” he said. He credited sports with being enormously helpful for his language development. “Being part of the team was the best way for me to learn. It was an unpressured way,” he said. His sport at school was track, and Lewiston High School won the State Championship, three regional titles, and three conference titles during his years on the team. He himself was an All-State runner.
Now he worries about a lack of resources for youth sports and other activities, particularly in the summertime. He knows that when youth are bored, some of them will cause trouble. He said Lewiston would benefit from opening more facilities, and from funding more programs for youth. “Special sports camps cost a lot of money, so most kids can’t go. Invest in programs for youth – they are the future,” he said. In addition to sports, he recommended developing programs intended to teach people about each other’s cultures. Although he said that communication across cultural lines has gotten better in Maine in recent years, he favors more opportunities for dialogue, going forward, in order to reduce stereotypes, help people understand each other, and bring communities together. “It’s a better idea to come together beforehand, rather than in tragedy,” he said. He praises Mayor Ethan K. Strimling for his efforts to bring Portland area Mainers and immigrants together. “Portland is a great city,” he said. “Most people are very inclusive.”
Reflecting on his childhood in Dagahaley, Mohamed Awil remembered “the chaos of living in the conditions of a refugee camp,” but added “we were fortunate to be safely outside the war.” With a population of 210,556, Dadaad had schools that were very crowded and the roads so bad that when the camp flooded, rescue teams had trouble getting to people. According to ReliefWeb, a specialized digital service of the UN Office for the Coordination of Humanitarian Affairs (OCHA), Dadaab residents are plagued by insufficient access to food, bedding materials, mosquito nets, water storage equipment, and hygiene items. When Mr. Awil’s family arrived in Maine, the contrast with conditions in Dadaab was striking – his family was relieved to finally find the peace they sought. “It wasn’t our choice to be born in wartime and to be raised in a camp,” he said.
His siblings range from middle school-age to 31 years old, and his oldest sibling has children of her own, who attend elementary school in Maine. To his siblings and other young people, his advice is “follow your passion. For some it will be to go to college, for others to learn technical skills, or go straight into the workforce. We are lucky for what we have here. And out of adversity, we learn to maximize opportunities.”
Asked again about his arrival in Maine in 2009, Mohamed Awil remembered that his family came with nothing. He says they been working hard ever since to make something out of their new life, and now “Maine feels like home.”