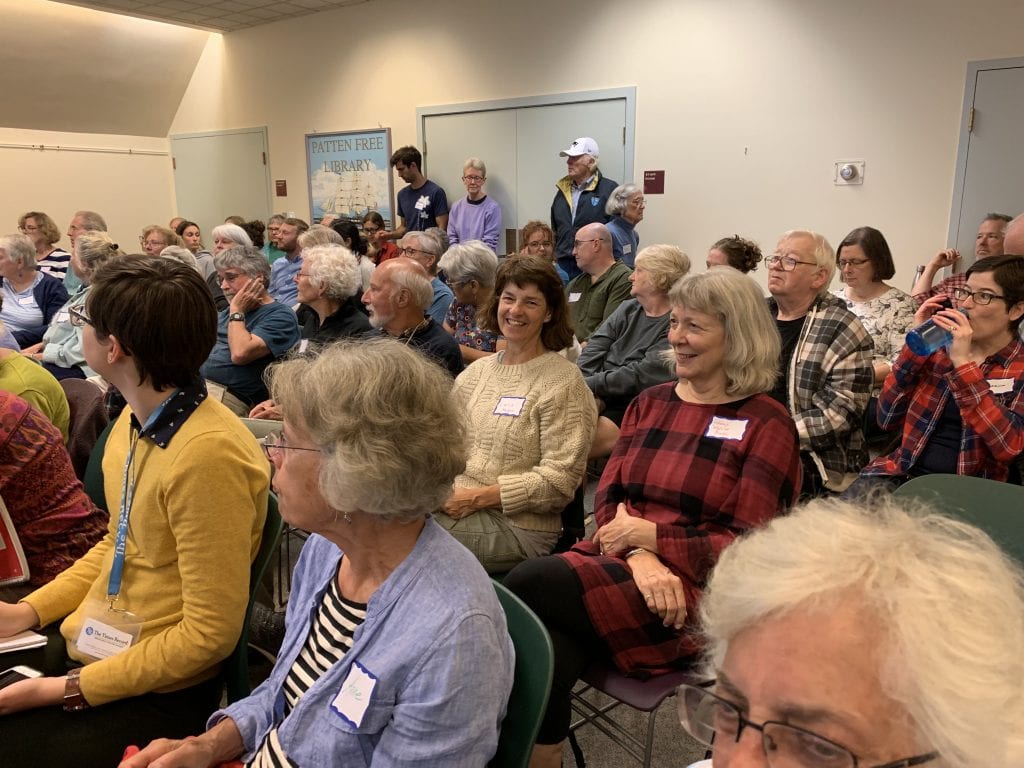 Chris Mazza and Frannie Wheeler traveled to the meeting from Camden

An overflow crowd of close to 100 people attended a September 10 public meeting at the Patten Free Library in Bath to learn about the asylum seekers who have recently moved into the city. The meeting was led by Martha Stein, Executive Director of Hope Acts, Portland and Carol Kalajainen, from the steering committee of the Mid Coast New Mainers Group (MCNMG). 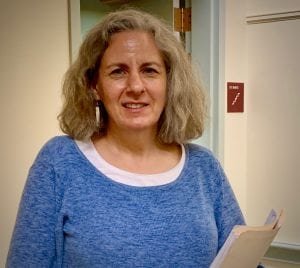 Martha Stein, Executive Director of Hope Acts, an organization that has helped asylum seekers in Maine for many years

Ms. Stein and Ms. Kalajainen provided the attentive audience with a broad-brush introduction to the backgrounds of the nearly 450 legal asylum seekers who arrived in Maine over the summer, some pointers about culture, information about what needs the asylum seekers have, and practical ways that volunteers can provide assistance. According to Ms. Stein and Ms. Kalajainen, approximately ten families of asylum seekers now live in Bath. Six families had been living in the city prior to the summer; four more have moved in recently. The families are young, many are well-educated, and all are eager to work.

Marc Meyers, Bath’s Assistant City Manager, assured the crowd that Bath welcomes the asylum seekers. ““We are open to helping however we can,” he said.  “We want to make sure asylum seekers feel welcome here.”

The presenters explained that despite the twin disadvantages of distance from substantial, established African communities in Portland and Lewiston, and relatively weak transportation systems – particularly in Bath – both Bath and Brunswick offer important services that make the cities live-able for asylum seekers, such as a hospital and medical and dental clinics; English language programs for children and adults through the school system as well as through Mid Coast Literacy; organizations that provide for food and non-food needs, such as food pantries, food banks, Merrymeeting Gleaners, and Midcoast Hunger Prevention; strong faith communities; walkability. These are the same services available to other residents of the communities. 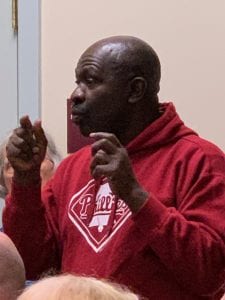 Maurice Namwira spoke about the need for better public transportation 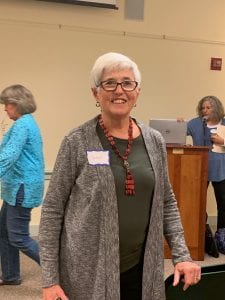 When a makeshift shelter at the Expo Building created for the asylum seekers who reached Maine this summer was closed on August 15 due to a prior contractual agreement with the Red Claws basketball team, Bath and Brunswick were included in the corridor of communities that were considered as prime locations for the asylum seekers to make their new homes. Mainers as far north as Fort Kent had offered to open their homes and communities to the migrants, who come primarily from Angola and the Democratic Republic of Congo. In addition to the four families who moved to Bath, approximately one dozen families have now moved to Brunswick, with more expected. No one knows if further waves of asylum seekers will make their way to Maine, said Ms. Stein.

“Asylum seekers did not come to Maine to be a burden. They came to raise their children, work, pay taxes, and give back to the communities that are helping them,” said Ms. Kalajainen. Many migrants have said they fled Africa because they feared retaliation against themselves, or their relatives, after speaking out critically about their governments.

For now, until they receive work papers – a process that could take at least a year – the newcomers have no choice but to be on the receiving end of assistance offered by Mainers. And they face a challenging acclimation process. Everything is new and different! proclaimed one slide from the presentation: from relatively simple differences like weather, and food, and cleaning products, and how we get our windows open, and how our vacuum cleaners work, to more complex differences, like language, and notions of time, space, and respect.  Ms. Kalajainen urged the audience to think about culture as a pair of invisible glasses, through which one looks out at the world. She explained that, simply by virtue of birth, Americans put on one pair of invisible culture glasses, and see the world according to the view those glasses provide; Angolans put on a different pair of glasses; Congolese yet another. Learning to see through a new pair of invisible glasses different from your own when adapting to life in a new country is tiring, and takes time. Learning a new language takes time, too. 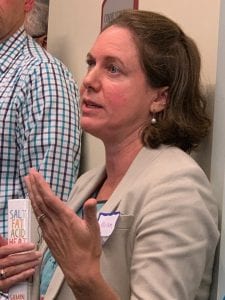 Attorney Miriam Johnson spoke about the complexities of the legal system

“We have no idea if or when this kind of an event – such a large group of asylum seekers arriving at once – could occur again,” said Ms. Stein. “Maine has done an amazing job of welcoming these people. Faith groups, non-profits, volunteers have all stepped up, saying ‘We’re here’.”

The Mid Coast New Mainers Group welcomes others to join their group who would like to help asylum seekers integrate into life in the area. The group needs interpreters, lawyers, drivers, English language tutors, mentors, database, website and Facebook support, steering committee members, and help with special events. 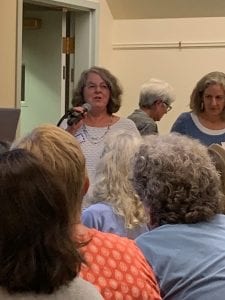 Cash donations are encouraged. 100% of any gift will go toward meeting the needs of asylum seekers. Checks should be made payable to: Brunswick Area Interfaith Council. Please mail checks to: Mid Coast New Mainers Group, P.O. Box 514, Brunswick, ME 04011 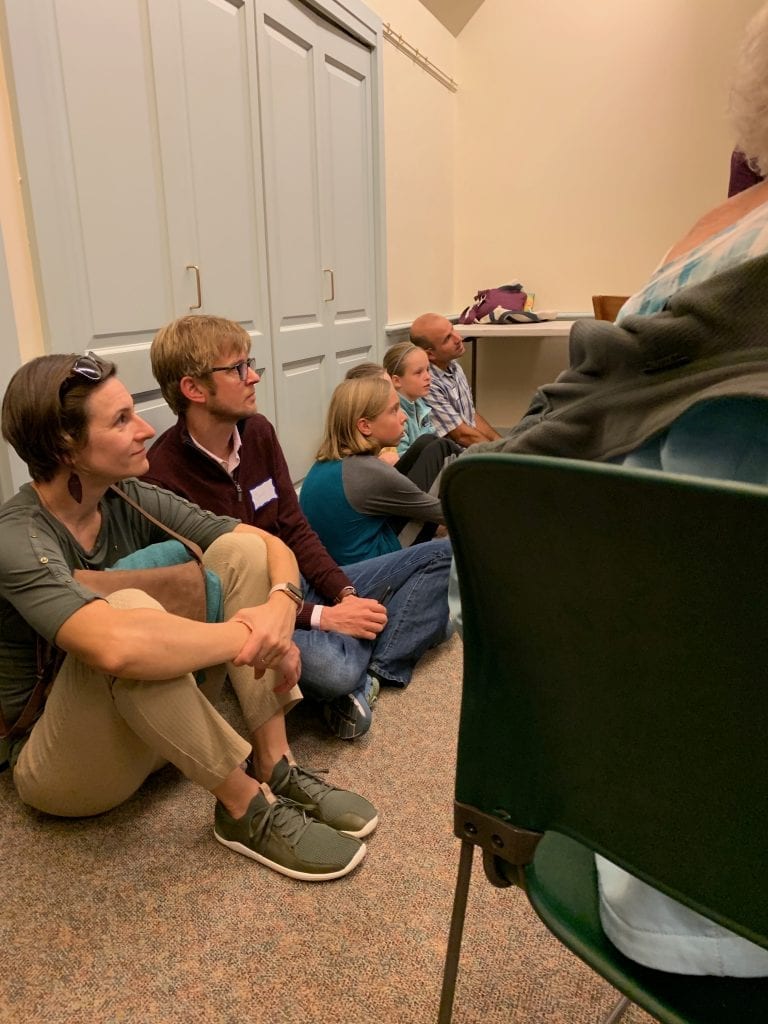 There was an overflow crowd that included children