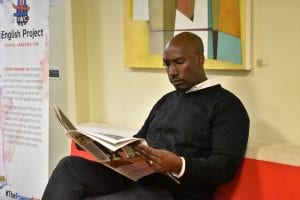 When Georges Budagu Makoko first arrived in Maine in 2002, he was desperate for news from the region of Africa he’d recently fled. But he couldn’t find any. Neither could he find many Americans who knew what was happening in his home country of the Democratic Republic of Congo and its neighbors.“Between them, Rwanda, Burundi, and Congo had lost more than six million as result of the conflict. I was shocked that people didn’t know anything about that, knew nothing about the human loss. It bothered me so much,” he said. “We lost almost everything, yet here people have no idea. How come they don’t know? I struggled to understand why.” Few Congolese lived in Maine at the time, several years before significant immigration began from Central Africa to Southern Maine. So he wrote a book about it. “I could see that people are curious about why people are coming here from the other side of the world. Why are they here? I wanted to answer those questions in my book.” He published Ladder to the Moon: Journey from the Congo to America in 2013, telling the story of what had brought him to that point, from childhood in a small, mountain village in Kivu, in eastern Congo, to facing conflict and war in Congo and Rwanda, to seeking and receiving asylum in the U.S.

Each of Budagu’s moves brought surprises and dramatic change. When he left his village of 200 people at age 14, to go to school in Uvira, he was struck by the diversity of the city’s nearly 100,000 residents. Members of many different tribes lived and worked together, and spoke at least five different languages, including the official Swahili and French; Congo has several hundred ethnic tribes with their own languages. “I spoke a bit of Swahili,” he said, “but my accent was thick and I had to adjust and speak like a regular person in that city.” He learned English after moving to the U.S. and is now fluent in English, Kinyarwanda, Lingala, and Swahili, and speaks French and Kinyamulenge.

The poverty in the city shocked him, too, as he saw people struggling to make ends meet and begging on the streets. In his self-sufficient village, they grew or made everything they needed, and didn’t lack at all. People in Uvira who didn’t eat well often grew sick and died in the hot climate where malaria was common; only one person had died in his village during his childhood.
Being Tutsi, he grew afraid when conflict with the Hutu began to spill over into Congo. After living in Uvira for six years, he moved to Rwanda in 1994.

“I will never forget the story of the first time I landed in Rwanda,” he said. “It was a ghost town. Imagine a country that had over one million people killed and two million had people left. It was dark. They had destroyed all the infrastructure, electricity.” Budagu felt lucky to be in his new home, but was shocked by the emptiness. Two years later, war started in Congo, followed by a second war in 1998 involving five countries. “My tribe was in the midst of that whole conflict. War started in 1996, trying to save my tribe which had been targeted by the Hutus who’d committed genocide in Rwanda.”

He’d gone to college in Rwanda, earning a degree in Business Administration from the National University of Rwanda. After graduating, he attended a conflict resolution conference in Norway in 2001. He returned to the conference a second time in 2002. While there, because of the worsening situation involving his Banyamulenge tribe, he knew he couldn’t return to Rwanda or Congo, so he applied for asylum in the U.S. After a brief stay in Virginia, he contacted a few people from DRC Congo whom he had learned were already established in Maine. “At that time, there were not many Congolese in the U.S.,” he said. “Most migration to the U.S. from Central Africa began in 2005.”

He was shocked again, just as he’d been when he arrived in Uvira, by the complex American system. “Everything was grandiose — streets, highways, lights. Almost everything was so different from the life that I knew back in Rwanda and the Congo. The culture, everything.” He arrived in summer and a friend took him to the coast where he saw people sunbathing in swimsuits for the first time. He didn’t know what to think. “It was a new thing for me,” he said.

In Maine from 2004 to 2019, Budagu was senior property manager at Avesta Housing, which promotes and provides quality affordable homes for people in need. In 2019, he and a group of friends started Serenity Residential Cares, a social and human services organization providing residential and community-centered support services to adults with cognitive, intellectual, psychological, and physical disabilities.

Learning his sixth language was a challenge that made him wish he’d paid more attention during English classes at school, but he soon learned enough to begin searching for English-language news from home. “Where could I find it?” he wondered. “If you look for hours and hours, you will not find anything reported about Africa. Where can anybody from that region get the news? This can’t be true.” After writing the book that told his story, he realized that writing books wouldn’t provide news from Africa, nor would they help Americans understand the ever-changing situations that led to a growing influx of immigrants. “Maybe I should just do a newspaper, a local newspaper that will be published here in Portland,” he thought. “So people can get a sense of why people are coming here, what issues they face, and how they can help them.”

Budagu founded Ladder to the Moon Network in 2016 to educate the public about Africa, increase awareness of the connection between current conditions in Africa and migration, and describe the challenges faced by African immigrants as they are in the process of relocating, as well as after resettlement. After making a presentation in Rockland, he met Kathreen Harrison and told her about his newspaper idea. They talked about it and worked out details for a year before publishing the first issue of Amjambo Africa in April 2018, with Budagu as publisher and Harrison as editor. “I am very, very happy with how it’s going,” he said. Many people write with comments like, “Through the newspaper, I begin to understand the culture differences, or read news from Africa, or know stories from the immigrant community.” Not only through news from Africa, telling immigrants’ stories helps others connect to resources. “When you share with me how you became where you are, I can learn from that. Wow, this is possible,” he said. “If I know how to start a business, maybe somebody who used to have a business back home will read it and think, ‘So I can do it.’ It’s a wonderful thing how we enrich our society and share our own stories and learn from each other.”

“I don’t know of any other newspaper, to my knowledge, that publishes in six languages. I think our news is very unique in this way,” he said. “I’m glad this idea came to fruition. It would be horrible to not have it.” He’d like to cover even more news from Africa, as well as from the African Diaspora in general, increasing Amjambo’s utility to both the immigrant and non-immigrant communities.