Oumalkaire Said Barkad was born in Djibouti, educated in France, and is now a fully employed mechanical design engineer living in Portland whose motivation for sharing her story was to correct the dominant narrative that portrays immigrants as free-loaders who draw heavily on local economies without giving back. In fact, the truth is often quite the opposite, she explained in near-perfect English over coffee one mid-winter Saturday morning at a local coffee house. 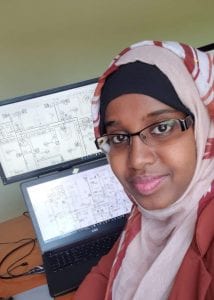 “I have been working full-time for over five years now, and I pay a lot in taxes. I have already paid back more than I ever received, and now my taxes support others – including local Mainers.” She added that many newcomers do need financial assistance when they first arrive – Ms. Barkad did, for a short time – but most, like her, don’t rely on it for long.

According to the New American Economy, in 2016 immigrant households contributed $62 million in local and state taxes in Maine, as well as $1.2 billion to the Greater Portland metro area’s GDP. As soon as foreign-born Mainers master some English skills, and acquire professional credentials or training, most are quick to get jobs, start paying taxes, rent and buy homes, purchase cars and gas, and contribute in a multitude of ways to the economy.

Ms. Barkad has worked hard to get where she is, and her trajectory into successful full employment and professional licensure is instructive of what it takes for newcomers to integrate quickly – a combination of financial and professional support, along with personal qualities of determination and perseverance.

Stefanie Trice Gill, owner of IntWork, a Portland-based company that recruits engineers and STEM professionals to work in Maine, helped Ms. Barkad get her first break – an internship with ArchSolar, a company that designs and builds environmentally and economically sustainable greenhouses. Mrs. Barkad took the internship instead of holding out for a higher-paid job to give herself time to acclimate to the American system before applying for a job commensurate with her training. “I was willing to take a low salary because I knew I could prove myself in time,” said Mrs. Barkad.

While interning with ArchSolar she held a second position as well, with the start-up desalination company BeltaneSolar. BeltaneSolar hired Ms. Barkad as an intern relatively risk-free thanks to Goodwill’s Make-it-in-America (MIIA) program, which covered part of Ms. Barkad’s salary. MIIA also helped Mrs. Barkad create her resume and get her credentials evaluated. This April she will be licensed as a professional engineer.

David Jackson, Executive Director of the State Board of Licensure for Professional Engineers, contacted by email for this profile, wrote, “We have been impressed with Oumal’s persistence in working to establish the record needed to achieve licensure as a professional engineer in Maine. This is a great achievement, as national studies indicate that roughly 12-20% of all engineers, depending on discipline, become professionally licensed. Licensure is particularly helpful to foreign-trained engineers as it clearly demonstrates to potential employers that they meet an established, recognized standard. Oumal has worked hard and met all of the licensure requirements and has every reason to be proud of her achievement and her success.”

Ms. Barkad emphasizes that newcomers need support as they get their feet on the ground in Maine, and that Goodwill was a great resource for her. “It really helps to have programs to support newcomers. In the beginning I needed some job support and training, and my English was limited,” said Mrs. Barkad. While the MIIA program no longer exists, Goodwill offers other programs through Workforce Solutions to help people get started professionally.

“If someone comes in and wants a great career, we will help them. It’s so important to support New Mainers who want to work, especially because Maine businesses need the help. There are so many job openings that local businesses need to fill, so if we can help by boosting someone’s skills … that’s a win for everyone,” said Heather Steeves, of Goodwill Northern New England, reached by email for this profile.

Stefanie Trice Gill considers Mrs. Barkad a pioneer. “What stood out about Oumalkaire, back in 2014 when I met her, right after she arrived in the U.S., was her fearlessness and willingness to learn, adapt, and ultimately take a leap of faith and show up ready to practice her career, in spite of the cultural gaps between herself and Maine employers. At the time, Mainers rarely hired immigrants – and especially not immigrants who wore a hijab. But in spite of all the apparent barriers, she was very open to ideas on how to connect with her peers, and very determined to persevere and succeed.” 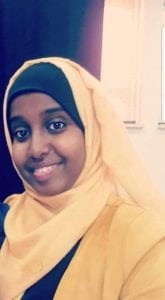 Mrs. Barkad remembers that during her first years in Maine she worked hard on integrating into American society, as well as on developing her language skills. “When I came, my goal was to integrate with Americans. I’m the one who came here, so I’m the one who has to assimilate,” she reasoned. She remembers that at first there were many jokes she didn’t understand, and she needed to ask the other interns to explain lots of things. She studied English by watching Netflix movies, youtube videos, documentaries, and while volunteering at the Boys and Girls Club – “Kids talk a lot!” she laughed. Shy at first, eventually she learned it was okay to ask questions, and make mistakes in English. “At first I didn’t understand the movies, but I would listen and repeat, and read the French subtitles for meaning.”

“People in Maine are encouraging. It’s okay in the U.S. to make mistakes. In the beginning I didn’t talk to anyone, but then I realized there’s no need to feel ashamed, or be afraid. People are very friendly. They say ‘hi’ when you pass them on the street. I’ve had people say, Welcome to our country’ at IHOP!”

Mrs. Barkad has worked as a mechanical design engineer since 2016 for BaselineES, which is based in Yarmouth, and is ‘an international provider of facility-related engineering design and consulting services’. Again, the company had an incentive to hire her. “Once I got a full-time job offer from BaselineES, Goodwill’s TOPS Program paid 50% of my salary the first 12 weeks of my employment.”

“Skilled immigrants are arriving in Maine all the time,” she said, and she should know – she has a big family living here. As soon as each adult in the family received their work papers, they entered the work force. “At a time when young Maine-born people are leaving, and the state is getting older and older, Maine needs these new people.”

Ms. Trice Gill agrees. “Oumal, like many of the foreign-trained professionals living in Maine, has exactly the skills we need for the Maine economy to survive. I invite employers who feel trepidation about hiring foreign-trained talent that relocates to Maine to meet her.”

Mrs. Barkad has some advice for newcomers – “Language first. It’s the most important thing. And get some experience. Don’t think too much about the salary at first. Once you have some experience, people will want you.” To companies she says, “Hire immigrants. You won’t be disappointed!” And to her fellow Mainers she says, “Don’t be afraid to ask us questions about things like Islam, headscarves – it’s best for us all to be open.”