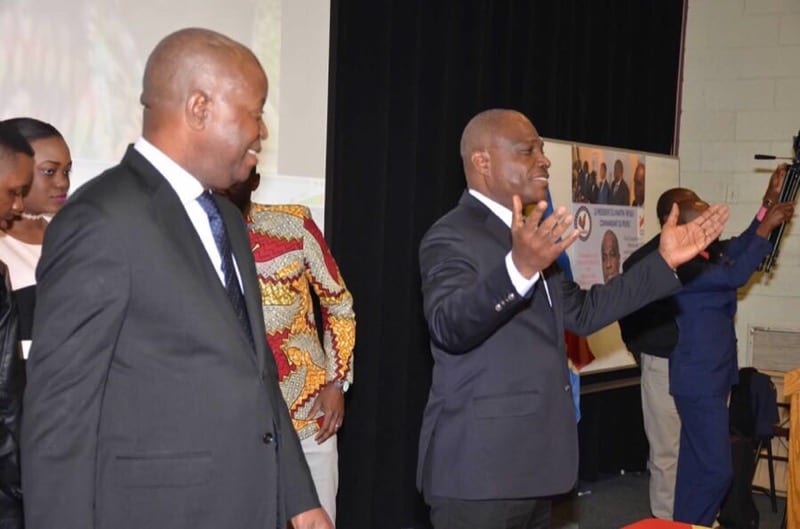 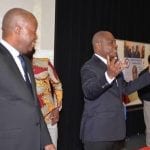 The Congolese community of Maine welcomed Mr. Martin Fayulu to the University of Southern Maine in Portland on March 31. Fayulu was the major opposition candidate in the fiercely contested December 30, 2018 national elections in the Democratic Republic of Congo (DRC). According to the Catholic Church, and many observers, Mr. Martin Fayulu won the popular vote, and therefore should have succeeded long-time president Kabila. Instead, Felix Tshisekedi was installed as president by Kabila. Mr. Martin Fayulu, however, has not accepted defeat, and his business cards read ‘President Elect’. He is on a tour of Europe and the United States, accompanied by former Prime Minister Adolphe Muzito and a delegation from his party,”Engagement for Citizenship and Development.”

After a prayer and the singing of the Congolese National Anthem, Fayulu began his presentation by saying, “It is very sad that the voice of the people was not heard and not counted.” Fayulu, speaking in French, described his version of recent electoral history: “In 2006, Jean Pierre Bemba won the election, but President Joseph Kabila rigged the results and took office. In 2011, Etienne Tshisekedi won the elections, but again Kabila changed the results. The same thing happened just this past December, when I won election by a large margin, with 62% of the popular vote, yet Kabila declared Felix Tshisekedi the victor after having changed the elections results. Now, after three months, the situation in the Congo is not good. A new government has not been seated – President Kabila’s political party has claimed 341 out of 500 seats in the parliament, and so it is very hard for President Tshisekedi to form the government. I believe there is internal conflict between Kabila and Tshisekedi as to how to form the government.”

Mr. Fayulu is asking the Congolese people, and the international community, to call for new transparent elections in the very near future, and to appoint a transitional government in the lead-up to the elections. He believes it is imperative that the voice of the people that elected him be heard. He wants to dismantle the culture of rigging elections that has gone on for so long in the DRC.

The auditorium at USM was packed, and many people expressed a wish that they would have liked to see Fayulu in power. People in the audience also spoke about corruption in the DRC, about the millions of internally and externally displaced people, about the extreme poverty and violence, especially in the eastern part of the country.
Mr. Fayulu had to cut the question period short because he had to catch a plane to Washington, D.C., the next stop on his tour. Many people posed for pictures with Mr. Fayulu before he left.

After the meeting, some in attendance expressed a fear that the community in Maine could be divided by Fayulu’s visit, since some Congolese in Maine support the declared winner, Tshisekedi. They expressed a hope that people will rise above political divisions and work together to help find solutions to the grave issues in the Congo. The Congolese diaspora is 10 million worldwide.