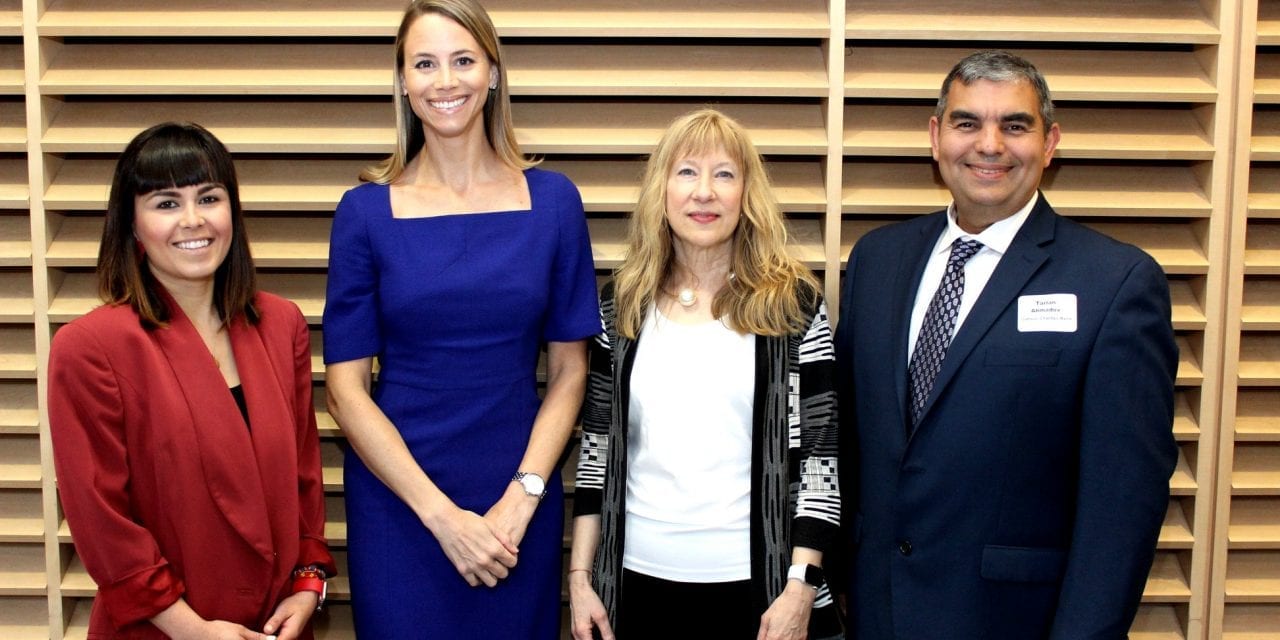 The Portland Chamber of Commerce teamed up with the City of Portland Office of Economic Opportunity, and Catholic Charities Maine to present the tightly-programmed, informative summit “Maine’s Untapped Talent: Our Immigrant Workforce” May 2 at the University of Southern Maine. The summit is the first of a number of events planned to help local employers learn about – and tap into – the sizeable talent pool of Maine’s foreign-trained, immigrant workforce as one way to help Maine address its labor shortage. Employers from a wide variety of industry sectors attended the summit, which kicked off with a welcome from Quincy Hentzel, CEO of Portland Regional Chamber of Commerce; opening remarks from The Honorable George J. Mitchell; and a keynote from Jeff Sanders, President of Maine Medical Center.

Chris George, Executive Director of Connecticut’s largest refugee resettlement agency, IRIS, led an in-depth role-play designed to help those in attendance better understand the rigorous vetting process refugees undergo before they are allowed to come to the U.S. Tarlan Ahmadov, State Refugee Coordinator for Catholic Charities Maine shared compelling data about immigration numbers in recent years – unlike most years, when Maine receives between 250-400 refugees, in all of 2018 only 66 refugees were admitted. This dip is a result of federal policies.

Julia Trujillo Luengo, director of the Office of Economic Opportunity in Portland, presented data from New American Economy illustrating that between 2011 and 2016, 75% of the overall population growth in the City of Portland came from immigrants, as did 11% of the overall population growth in the Portland metro area. Of these immigrants, 59% were of working age (compared to 54% of the local population), and 35.3% in District 1 held a college or graduate degree. Given that Maine’s workforce gap is significant, and growing – a 2016 Coastal Enterprises, Inc. report “Building Maine’s Economy” predicted that “in two decades, Maine will face a 109,000-person gap between labor force leavers and entrants.” – the data Ms. Trujillo shared makes the case for looking to foreign-trained immigrants to help fill that gap.The summit touched on the unique barriers faced by immigrants, and Bridget Kahn, Jerry Mopembe, Katherine Stitham, and Katherine Gebremedhin provided employers with advice on how to access this talent pool, and how to hire, promote, and retain immigrant employees.

A panel of four immigrants spoke about the phenomenon of underemployment in Maine – when people are offered jobs, but those jobs don’t match their skillsets and education. Vera Popov, originally from Russia, and now a Financial Advocate for New England Cancer Specialists, shared her personal story. “Despite filing many applications for open positions, I received no calls for interviews,” she explained, so until she finally got a break, she was forced to work as a housekeeper. Claudette Ndayininahaze, with years of experience under her belt as the national sales manager of a large company, and a B.S. in Administration and Management, also worked in housekeeping when she first arrived – in her case as an asylum seeker from Burundi. Now she works as a cultural broker at Opportunity Alliance, but initially, despite her high-level skills, she was stuck working in a low-level job. These are examples of underemployment. Dr. Ngamba, published author, and highly-reputed pediatric oncologist and hematologist in Angola, is still underemployed. He works in production. “Imagine what it’s like for someone with my background to work on a production line,” he says. Dr. Ngamba hopes to find work in Maine using his education and skills.

“Break the silence – the fear you have – create the space where you can move forward together,” Ms. Ndayininahaze advised the audience. She stressed the importance of people getting to know each other – of relationships between employers and immigrants. Ali Farid, the fourth panelist, served as a combat linguist and cultural advisor with the U.S. Army in Iraq from 2007-2010. Now he is a lawyer in Maine. “If an employer is looking at an application and a resume, and wondering if this person is worthy of a job in your company, remember that immigrants have something all employers need … perseverance and determination,” he said. Reza Jalali, writer, educator, and community activist, and a former refugee from Kurdistan, Iran, moderated the panel. He emphasized that the immigrants themselves, and Maine, stand to gain from each other. “Immigrants are more than mouths to be filled – they offer so much love for this beautiful state.”

The summit concluded with Anita St. Onge, Executive Director of Portland Adult Education, and Kim Moore, Project Director of Greater Portland Workforce Initiative, who shared the need for increased resources – particularly language intensives, so that immigrants who want to learn English as quickly as possible have access to classes, and the need for programs to help people access jobs that meet their potential. Stay tuned for upcoming, in-depth seminars on the topics covered in the inaugural summit.