Our faith teaches that what we have comes as a gift, and that we should 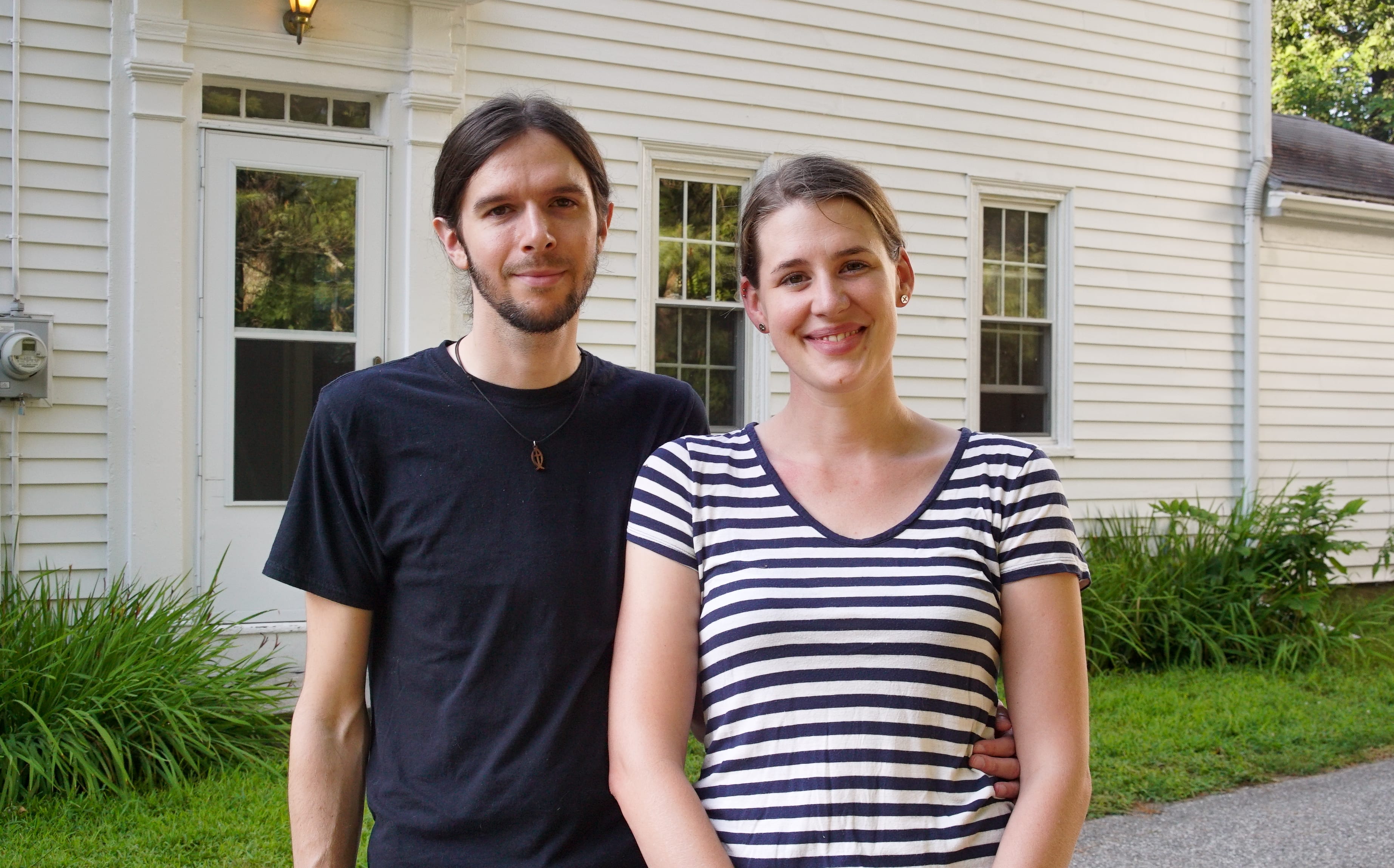 Hosts are needed for twenty more families before August 15

With one week to go before the makeshift shelter at the Expo Building must be dismantled on August 15 due to prior contractual obligations, more housing is needed for the asylum seekers still living there. The number pf people staying at the Expo has been decreasing day by day, and many families have been successfully placed in either long-term or temporary housing, however 185 people were still living at the Expo Building as of August 8, and the majority of them remain in need of housing. 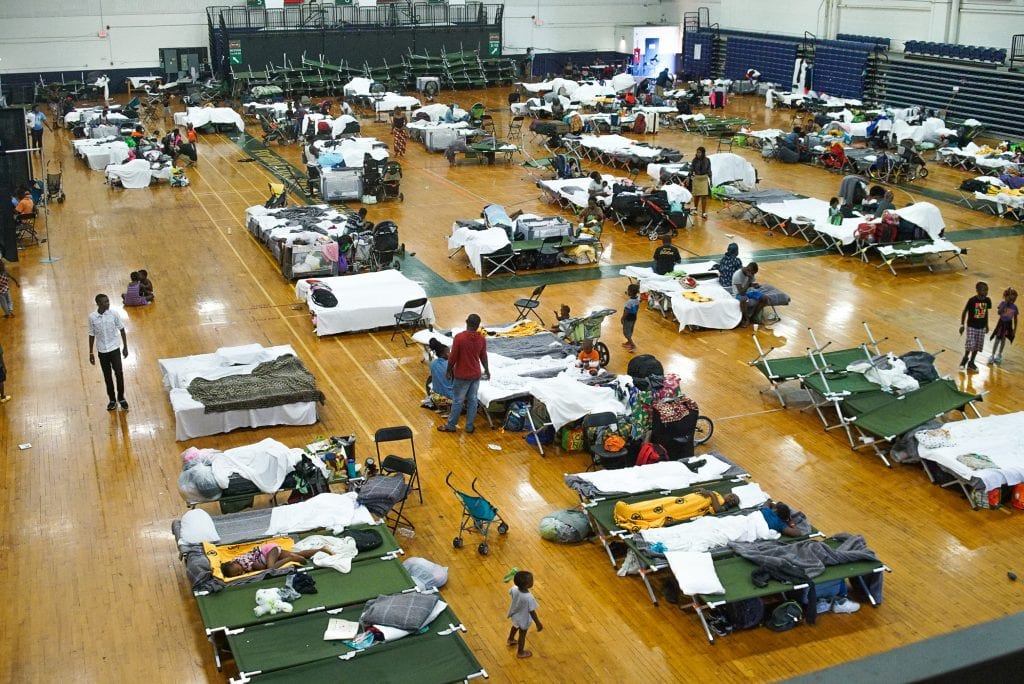 According to Jessica Grondin, Director of Communications for the City of Portland, 52 families, or 156 people, have moved into independent housing so far. Tom Bell, Public Information Officer at the Greater Portland Council of Governments (GPCOG), said that eighteen families of asylum seekers had moved in with temporary host families as of August 9, and ten more asylum-seeking families have been matched, and will be moving out of the Expo Building in Portland into private homes in the near future, including three families by the end of the day on August 9. The Times Record reported August 8 that 60 more people may possibly move to Brunswick in the next week. The numbers of asylum seekers arriving in Portland has slowed in recent weeks, however newcomers do continue to arrive, with two more new families arriving August 7, to bring the total number of intakes since June 9 to 437 people. 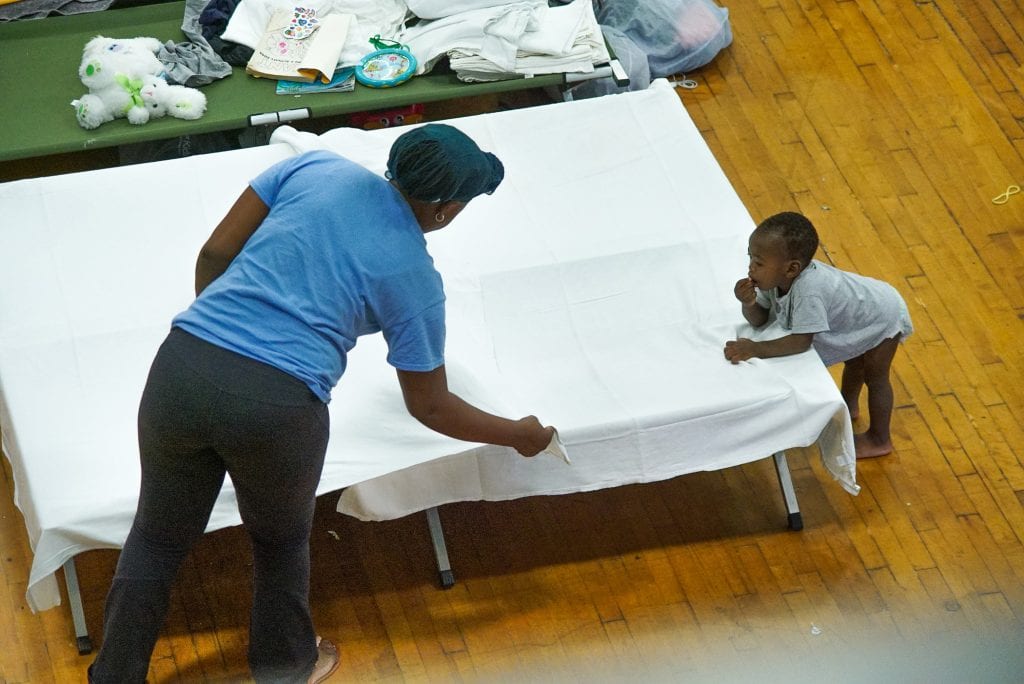 Tidying the family area at the Expo
Photo: Tom Bell

GPCOG launched the program “Host Homes” in mid-July. Since then, 70 potential host families have filled out applications, and 45 of these have been interviewed by a team that includes Mufalo Chitam, Carla Hunt, Baba Ly, Papy Bongibo, Sabine Diasonama, Sonny Nguizani Nsiona, and Claude Rwaganje. With the deadline looming, the Council on International Educational Exchange (CIEE) has volunteered to help with interviewing potential host families who live outside the Greater Portland area beginning August 9. Families in Hallowell, Gardiner, Lewiston, Augusta, Pownal, and Brunswick have filled out applications to serve as temporary host families. Others interested in hosting are encouraged to go to the GPCOG website and fill out an application. Mr. Bell said that 20 more host families are needed as of August 9. 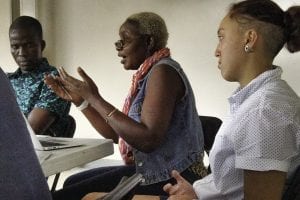 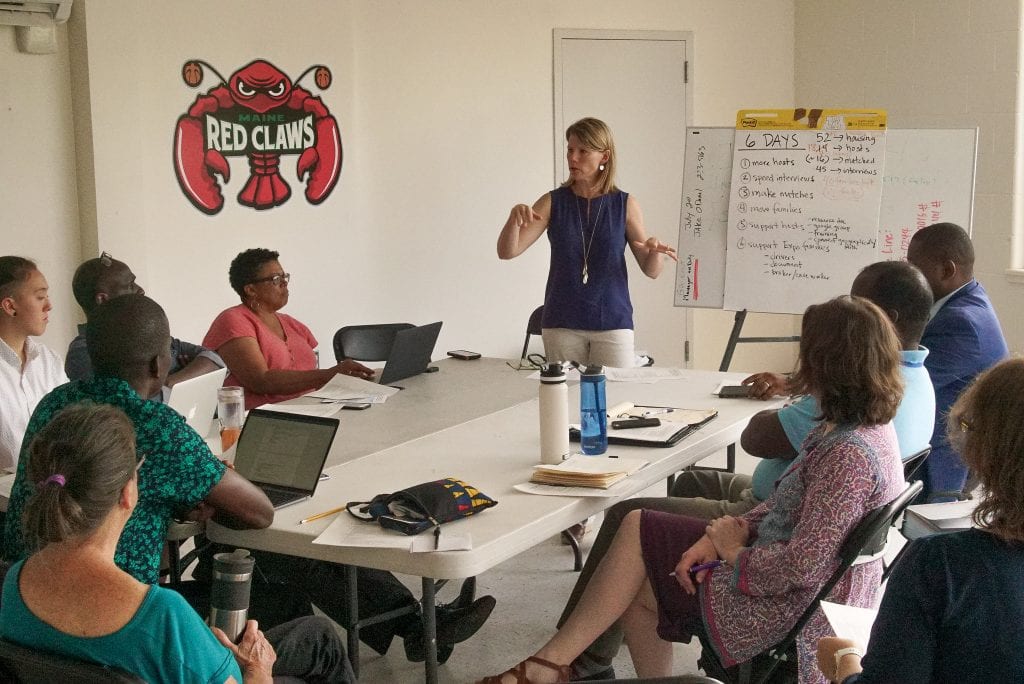 With six days to go before the Expo shelter closes, the coalition is hard at work on August 9
Photo: Tom Bell

Reverend Amelia Edson and Jacob Edson, of Falmouth, have been hosting an asylum-seeking family from the Congo for almost four weeks now. “They’re the best housemates we’ve ever had,” said Reverend Edson. “They are fun, considerate, they help with chores, their baby is adorable – we had a lot of housemates in graduate school, and this family is the best!”

The couple explained why they decided to host. “We strongly believe we should try to share as much as we can. Our faith teaches that what we have comes as a gift, and that we should share that gift.” Other families in Falmouth have been helping out by providing much of the transportation needed by the Edsons’ guests.

Reverend Edson said that her neighbors, church members, and other volunteers have formed a transportation team. The Edsons and their Congolese guests sit down once a week and discuss what transportation would be helpful for the upcoming week. Reverend Edson enters the information on a spreadsheet, which is shared with the volunteers, who then sign up for driving slots. The Edsons’ house guests confirmed that the system has worked well. “We have never missed an appointment,” they said. Most days the couple and their baby are out for much of the day – at Portland Adult Education for English classes, or shopping for food with their vouchers.

The guests emphasized that they feel welcomed, and comfortable living with the Edsons. “We are at ease,” they said repeatedly. They talked about cooking the foods they enjoy, such as fufu and pondu, and said that they are happy that their baby has room to play. “She plays, she yells, she is content. At the Expo there was not enough space,” they explained. Their smiles and laughter as they talked showed how happy they are to be living in a private home. And they highlighted the advantage of living with English speakers, saying that they all speak together every day. 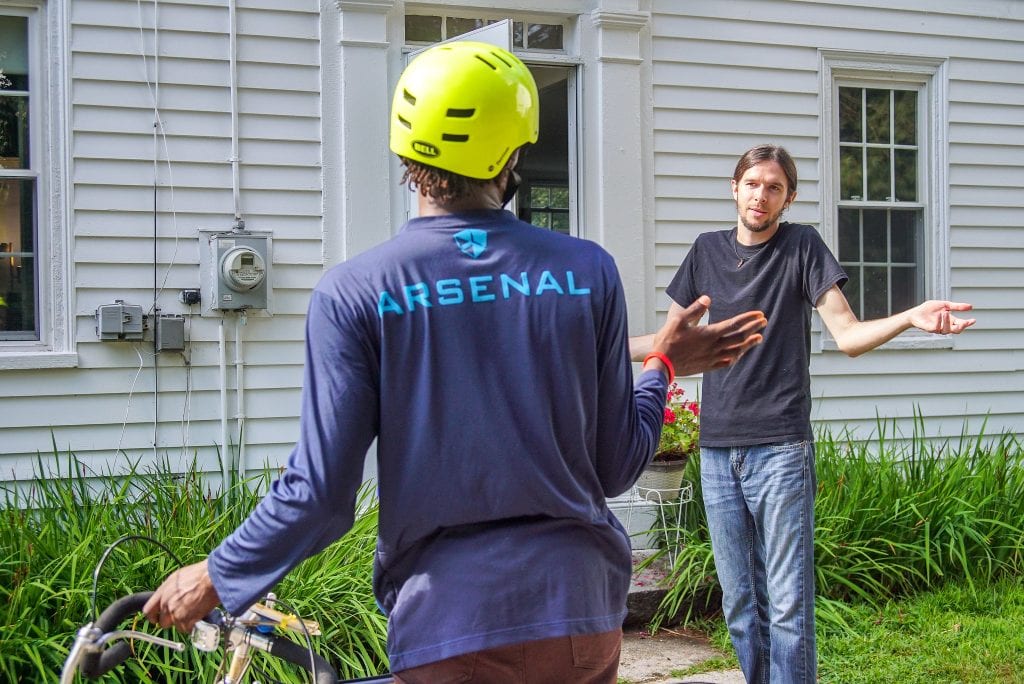 “Communication is easier than you might think”, said Carla Hunt
Photo | Tom Bell

Indeed, communication is less of an issue than one would think, emphasized Carla Hunt, from the Compassionate Housing Initiative in Yarmouth. Her group has helped 45 asylum seekers in Yarmouth over the past three years. She said that although the languages of the recent asylum-seeking families are usually French, Lingala, or Portuguese, and very few Americans speak a foreign language, “there are many ways to communicate without sharing a language.” The Edsons agreed, explaining that play acting, and google translate, are two tools they rely on. And, they added, their guests are learning English quickly. “Just today they shared some more new words they learned.”

Carla Hunt explained some of what it takes to be a successful host. “The family needs a bedroom of their own, a bathroom (shared or private), access to the kitchen, access to laundry facilities. Host families should be culturally sensitive, and willing to help connect their guests to resources …the newcomers want to get on their feet, and resume their lives. They want to be independent, they just need help connecting to resources. But the “Host Homes” program is layering on support for the myriad of things the newcomers need.” 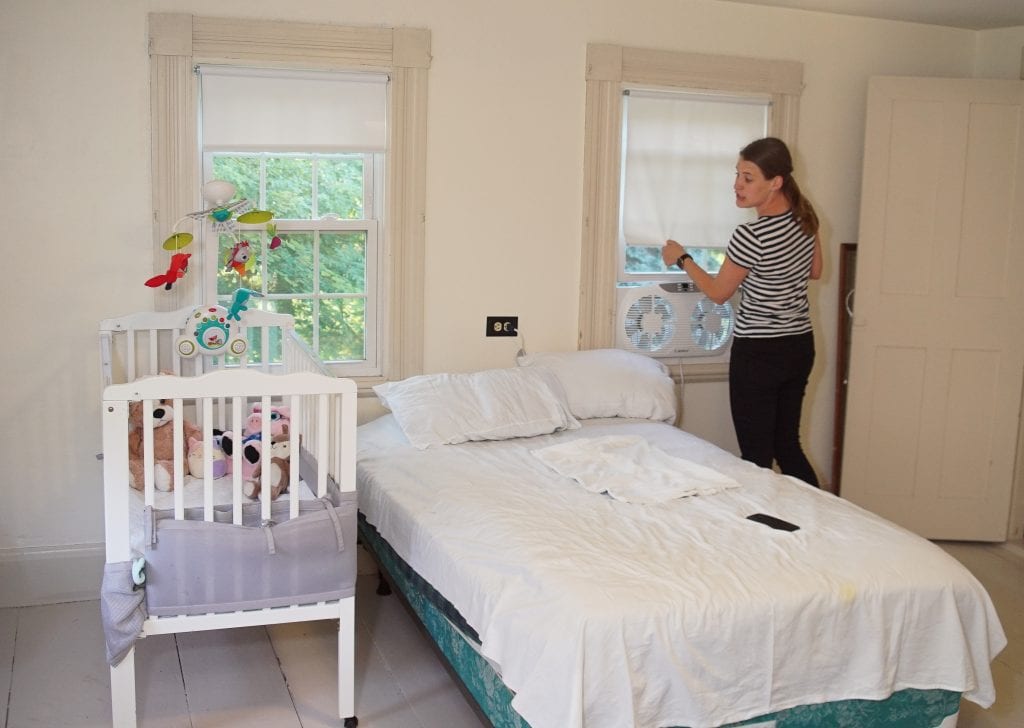 A bedroom of their own
Photo | Tom Bell

Ms. Hunt said she is heartened – in fact, “amazed” –  by the numbers of people with no experience hosting who are willing to jump in and help out. She encouraged more people to give it a try, saying that helping out makes hosts “part of a collective movement. Hosts learn about another culture, and about what it means to be an asylum seeker. It is part of our collective responsibility to try to help when resources are limited.” She said that while hosting may seem scary, and “it is normal and natural to fear the unknown, the asylum seekers are respectful, curious, kind, and grateful. They are adults who’ve had lives, jobs, careers. They are responsible and resilient.”

Reverend Edson emphasized how much they’re enjoying being hosts. “For anyone thinking about hosting, I would encourage you to fill out an application. It’s very enriching. It’s made our lives more fun and interesting, and I would recommend it to anyone. And it’s not hard. They do their own cooking, their own laundry. And we learn funny things about each other. For example, I know now that our guests don’t like olives at all!”

To learn more about becoming a host family, visit: https://www.host-homes.com
If someone has a rental unit(s) or a property, please contact the City of Portland’s Social Services Division 207-775-7911.