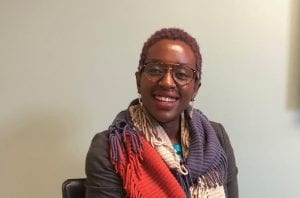 Jeanne Mariella Uwimana, a survivor of the genocide against the Tutsi in Rwanda, moved with her three children to Portland one year ago. A tall, strong, striking woman, she was just a child on April 22, 1994, the day her parents were murdered.

“For me to heal, I need to tell my story. I’d also like to help others who are not yet facing their trauma to speak out,” she told me, on April 24, two days after the 25th anniversary of her parents’ death.

The genocide against the Tutsi started in Kigali on April 7, 1994, and spread from there. Some people tracked the violence closely on the radio, and when it came close to where they lived, they fled. But Ms. Uwimana’s family did not flee. Her father, who believed in love, said they did not need to be afraid, that their neighbors, their friends, would never hurt them. Ms. Uwimana’s older brother wasn’t so sure. He counseled the family to leave, but they didn’t listen to him. The people who killed her parents were neighbors, people her family knew well. She said that a worker on her family’s farm –- ‘almost a brother’ – murdered her sister. She herself was saved by her older brother, who dragged her out of the family home and into hiding.

After the massacre, from 1994 until 2015, Ms. Uwimana did not speak about what had happened on April 22, 1994. She lived for some years in a boarding school, and she remembers that many children there suffered terrible nightmares, weeping inconsolably, night after night, carrying on like they had lost their minds – some people thought the children had in fact gone insane – but now she realizes they were working through at least some of the trauma they had experienced. In her case, she didn’t work through the trauma at all; she ran from reality instead. “I couldn’t understand the hate – I was waiting to die. I lived with a fear of all people. I never spoke up, never got treated for trauma, I just kept quiet. If I felt sad, I hid under a blanket and cried. I never spoke to anyone, just covered myself up, and came out smiling, but inside me it was not the truth.”

Years passed, during which she assured herself, “Depression is not for me. I’m strong.” But in 2015, with a happy marriage, three wonderful children, an education, and a satisfying work life under her belt, “All of a sudden I lost my happiness,” she said. “I started drinking too much, I couldn’t sleep, I wasn’t myself.” She became seriously depressed, and attempted suicide. “I got stuck. I thought, ‘This can’t be possible.’ How can I be depressed so many years after surviving, after losing my family. I thought it was time to fly, to be really happy. But it wasn’t because I never spoke up. I really covered up for all those years, and it caught up with me.”

During this period, she and her husband and children were living in Denmark. One day her son came home from school and asked her to help him complete a family tree for an assignment – a moment Ms. Uwimana remembers as one of the hardest she has ever faced. “I couldn’t speak. I couldn’t talk about his uncles, grandparents. I couldn’t tell him,” she said. But finally she forced herself to. She told her son that all these family members had been killed in the genocide, and that he had no grandparents left. He was shocked. For her, this conversation with her son was a turning point.

“It was the first time for us to face a serious conversation like that. We had been dodging the truth, running from the reality. That was when we really had to face it – the genocide my husband and I had both experienced. We tried to be strong in front of the children, but after they went to sleep …,” she said, her voice fading, “ I knew I had to be able to talk to my kids, to really tell them what had happened to the family. I made a decision to work on healing.”

That healing process began right then, in 2015, and continues to this day, now that she has moved to Maine.  One definite payoff has been a closer relationship with her children. Her son thanked her for helping him understand what had happened. Ms. Uwimana credited Greater Portland Health with helping her face the trauma she experienced as a child, so she could work through the grieving she needed to do.

“It is a long struggle, a journey. It’s important to be aware of where you are in your healing journey. If you’re not aware of what’s happening, or how you are feeling, you can’t work on it.”

She said, “I feel so much better now. I wish everyone could wake up and face living life, and not just existing. I know that many people are still in denial, for many the trauma and depression are just hitting now, 25 years after the genocide.”

Ms. Uwimana wants to help others to “live beautifully” and encourages the many people who suffer – from genocide, and from other trauma as well – to get help, and to find ways to tell their stories. “Telling stories is a way of healing,” she said.