First-generation college graduate Leyla M. Hashi delivered the 2020 Student Commencement Address for the University of Southern Maine in a virtual ceremony on May 9, with a live graduation event planned for October. Hashi was selected for the honor by a committee of students, staff, and faculty. Glenn Cummings, President of the University of Southern Maine (USM), introduced her.

Hashi used her platform to describe several key events in her life trajectory and to talk about the importance of  bettering oneself, of not being afraid to seize opportunities that present themselves, and of being a helper to others. She spoke passionately about the important work of teachers, nurses, social workers, and other helpers.  “When I was writing the speech, I wanted to tell my own story, but not be focused only on me. I also wanted other girls who look like me to be able to relate, and have some representation – as well as be inclusive to everyone – be welcoming to everyone.”   A Communications major, who considers herself outgoing, and says others say she has a “loud personality,” Hashi plans on a career in journalism, which she considers a helping profession. “As a journalist, I know it will fall on me to be a voice for the voiceless,” she said.

Asked about her journalism goals in a May 4 Zoom interview, Hashi said, “I want to tell stories of people whose stories don’t get told that much. I want to tell their truth.”

While a student at USM, Hashi held an internship at the university’s radio station, WMPG, where she produced and aired a podcast series, Refugees of Portland, and got a taste of what it feels like to help others tell their stories.

“I believe there is magic in each person’s story, and I know their story is their identity,” she said. Concerned that her guests feel completely comfortable, Hashi let them speak in their native tongue on air – “Somali, Italian, Kirundi, whatever their own language was.”

To help listeners, she provided an introduction and summary in English at the beginning of each podcast.

Her guests’ stories of resilience in the face of adversity were emotional for Hashi, whose own family had plenty of their own stories to tell. Take the one of her beloved grandmother, who finally got a chance to learn to read and write at the age of 38 – around the same time as the six or seven year-old Leyla.

Hashi discovered her interest in journalism on a 2016 trip back to Somalia – her first after leaving at the age of four. She stayed with her uncle, who took her to see a live production of the evening news.  The anchor was a woman, and Hashi was transfixed. “I wanted to feel what that news anchor was feeling sitting in that chair. I liked the fast pace, the camera, the angles – the anchor wasn’t phased by all the action going on around her, she commanded the space. Here in the U.S., I see female anchor women, but I hadn’t expected to see that in Somalia. I realized I had gone there with the wrong mind set, and had to retrain my thoughts about life in Somalia.” 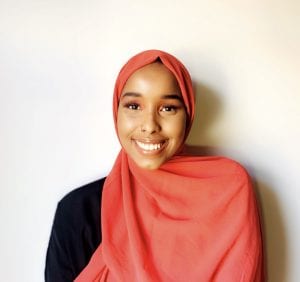 Prior to the trip to Somalia, Hashi had been a nursing student at Southern Maine Community College, but on her return to Maine she transferred to USM and declared as a Communications major. And her plan now, after a little time off this summer, is to apply to graduate school in journalism. “I do enjoy going to school,” she said, smiling cheerfully.

Leyla Hashi lived in Boston from age four until 2012, when she moved to Portland and enrolled at Deering High School. Dr. Ahmed, now Co-Principal of Deering, was Hashi’s Arabic teacher. “He had a very big impact on my life,” she said. “Dr. Ahmed told me not to be afraid of applying to college, that I could do it. I have stayed in touch with him. He’s the person I go to talk to about things. And he encouraged me to apply to be the commencement speaker when I told him I was interested.”

She was nervous about delivering the commencement speech in front of a large audience, however, and waited until 3:59 p.m. – one minute before the 4:00 deadline for applications – to submit hers. “I knew all eyes would be on me. But her family encouraged her to step outside her comfort zone, so she did. in the end, though, I did my speech with four people in the building! And I had been prepared for 5000 people!”

Hashi’s family is hoping the October ceremony will come off. “My family is very happy and proud. But the day I went to record my speech they weren’t allowed to attend, and that bummed them out a bit. But there will be a physical ceremony in October, and seeing me in my cap and gown is very exciting,” Hashi said.