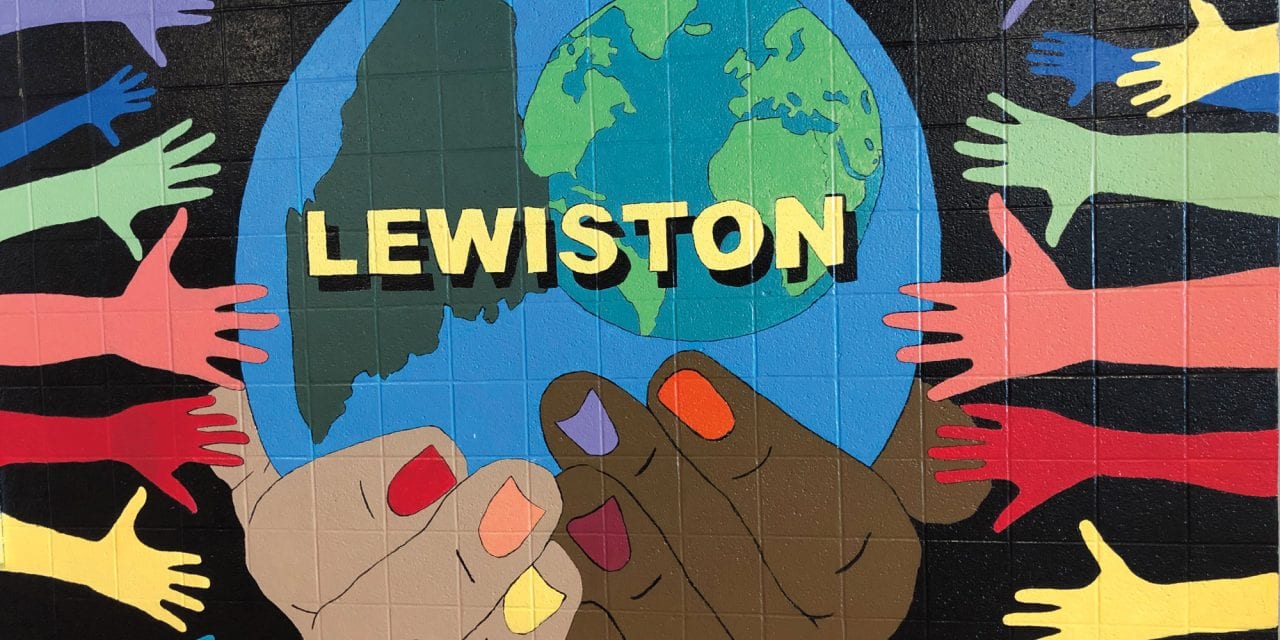 Students in Deanna Ehrhardt’s new Digital Media class at Lewiston High School have been learning how to integrate fine arts with art technology through a collaborative, hands-on project involving painting murals on school walls. So far, they have painted five murals and are in the planning stages for a sixth. The students’ very first mural was of the Lewiston Blue Devil mascot. Three of the finished works focus on people who inspire the students: Malala, Maya Angelou, and Martin Luther King, Jr. Lewiston High School Principal Jake Langlais asked the students to create a “diversity mural.” The commissioned work depicts variously colored hands surrounding and holding up a globe, with Maine and the word “Lewiston” highlighted on it. 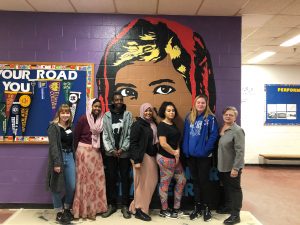 The supervising teacher, Ms. Ehrhardt, was born in Brunswick, Maine, but moved with her family to northwest Indiana when she was a child. She stayed connected to Maine all her life and decided to move back in 2018. She is delighted to be teaching at Lewiston High School, which was her first choice. “The demographic is similar to what I had in the Midwest,” she says, adding that she likes the mix of students. She developed the mural project in her last school, and decided it was appropriate for Lewiston High School, too. She wants her students to learn to “think like an artist, and develop an understanding of composition.”

The students use PhotoShop to design the murals. Then they project the image they have created onto the walls and sketch the outline with pencil. The sketching is laborious; this work alone can take two hours. Mixing colors is a group effort as everyone weighs in on exact shades. Materials are stored on a cart that students wheel out from their basement classroom to whatever wall they are working on.

Participants come from five different digital media class groups, and range from freshmen to seniors. The murals are an extra project that are not part of the regular digital media curriculum. Many students take time from study hall or lunch to work on the murals. Amjambo Africa! spoke to a group of eight student artists about what the murals mean to them: “We want to paint all kinds of people – people like Malala, who dresses like a lot of students here, in a hijab, and others who are just so cool! We don’t want to prioritize any one group of people. Everyone is tired when they come to school. They don’t really want to be here, but seeing all the colors on the walls makes you stop. It creates a new atmosphere. People stop to watch, they ask to help, and we let them.” 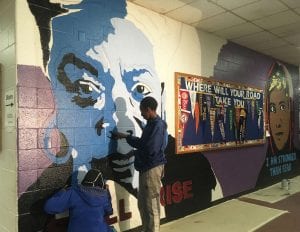 Students pause and tell the artists, “Keep up the great work!” adds Benjamin Ndamukunda, a freshman.

Freshman RhiAnnon Patrie explains, “All the walls used to be white. It was boring.”

“Everyone wants to get involved, join the class,” said Chloe Hirsch, a senior. “It’s something to be proud of, a way to leave a nice mark on the school. You can tell your kids one day that you painted that mural!”

Savannah Leonard, a junior, says, “Some teachers have even asked us to create murals in their rooms!”

Many voices chimed in: “It’s really great, but don’t just start painting on the walls! Talk to your art teacher or your administrator, and tell them you want to do this. We would love to collaborate with students in other schools who might like to try this themselves, so reach out to us if you’re interested.”

The murals at Lewiston High School require approval by the principal. The students are currently working on a proposal to paint Abraham Lincoln.

Ms. Ehrhardt’s digital media class is new to Lewiston High School this year. If student response is any indication, it’s a class that’s here to stay.