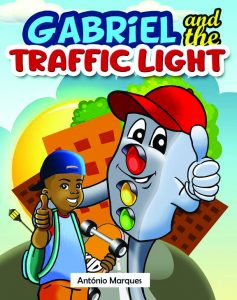 When António Marques moved to Maine from Angola he noticed that immigrant children who had grown up in villages didn’t know how to handle themselves safely around cars. Then an accident paralyzed a young boy in Lewiston in December 2018 and reinforced for Mr. Marques the need for safety education among immigrant children. He wrote Gabriel and the Traffic Light as an educational tool. The book tells the story of a young boy who learns about traffic signals at school. He learns what the different colors of traffic signals mea, about the rights of drivers of emergency vehicles to proceed through red lights, about pedestrian lights, and about traffic tickets that are issued to violators of the rules. Pedro Hiangalalo, a friend of Mr. Marques’ in Angola, created the charming illustrations for the book. He based the illustrations on photos of Mr. Marques’ youngest son, Gabriel. Mr. Marques is available for school visits. Gabriel and the Traffic Light retails for $12.99 and is available through Amazon or Dumapo, an online retail business owned by Sabastiao Pambo that sponsored publication of the book. Mr. Marques is turning his hand to adult literature next. He plans to write a book about “the hidden truths faced in coming to the U.S. – the challenges of the immigration process.”