“In Maine, being able to drive is often the difference between being able to take a good job or not. This is important for people.”

Bashir Shuriye, founder and owner of Iftin Driving School on Dartmouth Street in Portland, realized at a young age that he wanted to become a teacher. He started his career when he was still in his late teens, and taught math and physics in schools in Somalia and Yemen for over 30 years. “I have always loved teaching,” he said. 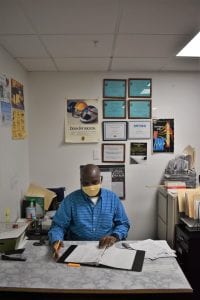 But in 2002 he moved to Maine and, with 8 children in tow, he needed to quickly find work and start earning an income. After an interlude driving a cab and then running his own taxi company, he was inspired to return to teaching after an encounter with an older Somali woman at the Bureau of Motor Vehicles.

She told him she had failed her driving test for the third time – despite having been a competent driver back in Somalia – and was deeply frustrated. The issue was language, he realized. In short order, he met a number of other non-English speaking immigrants who were also upset at their inability to pass the driving test. And he realized he had the skills to help them: he was a seasoned teacher, he was an experienced driver, and he spoke Arabic, Somali, and English.

So he took some required classes, and in 2017 he opened Iftin Driving School. “My goal was to save people from suffering,” he said, explaining that in Maine, being able to drive is often the difference between being able to take a good job or not. “This is important for people. And we have a good rate of success. Most people who study here pass the test. Only between 10%-20% fail,” he said. 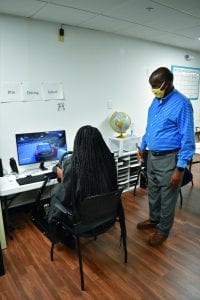 Shuriye explained his system. “Everyone has to learn basic driving terms in English to pass the test, so I give them lists of the words they need to learn.” He uses videos and other visual aids during classes, he said, and he explains content in Somali, Arabic, and English. He provides written translation for the written test for his students.

Thanks to his teaching skills, he can work with speakers of any language, even French or Portuguese, which he doesn’t speak. But the first day Iftin Driving School opened wasn’t easy. All the materials he had for instruction were in English. “People arrived speaking different languages, and I wondered how to handle this. But then I made different lines – one for Arabic and one for Somali – and with patience and perseverance, it all worked out. People passed the tests.”

Shuriye enjoys helping all kinds of people, including youth, single moms with kids, and older people. “People are very grateful, and for me it’s not just something I do for money. I like to help people learn, and I don’t want language or culture to stand in the way. The only thing that should stand in the way of driving is a lack of skills, and we teach those,” he said. He emphasized that he works with the needs of different families. For example, some Somali men don’t want their wives to drive in a car with a man from outside the family. So he invites the husbands along. “Culturally, people trust me,” he said.

The pandemic has been hard. However, after the initial shutdown, he developed safety protocols, and people started coming back. “We do distance separation of people, we keep doors open for air circulation, we have hand sanitizer everywhere, and we clean between each student.”

Driving classes have both theory and practicum components, with 30 hours of study in the classroom, and 10 hours behind the wheel. New classes start monthly. Shuriye works hard to accommodate people’s schedules for setting up driving times. For more information: 207-500-8888; [email protected]; 49 Dartmouth Street, Portland.