Justine Mugabo was born in Bujumbura, Burundi to a family with four children. She arrived in Maine as an asylum seeker in July, 2019. She works with In Her Presence, teaching the Senior cooking class with Nahla Alsafar.

Justine remembers that when she was 11 or 12, her mother announced, “Today you are going to learn to cook.” The young Justine didn’t like the idea of learning to cook, because she knew it meant time away from playing with her friends. So she decided to try and get out of the cooking lessons by doing the work really badly. Her mother quickly figured out that Justine was cooking badly on purpose, though, and doubled down – instead of giving up, and telling her uninterested daughter to go off and play, she told Justine she would just need extra practice, and would have to keep on with cooking lessons until she finally learned to cook well! So, Justine put her mind to the lessons, and learned quickly. After that, during school vacations, she and her siblings took turns cooking for the family.

When she was 14, her mother helped Justine and her sisters launch a small donut-meatball-sambusa business, with the aim of letting them earn their own pocket money, and learn about money at the same time. Each sister was given a food specialty, and Justine’s was donuts. She learned her mother’s secret donut recipe, which her mother had brought from Uganda, where she had grown up. Justine sold to shops, and was allowed to keep all the money. Her mother told the girls, “If you want to buy perfume with the money you earn, go ahead. If you want to pay someone else’s school fees, go ahead. You should save, but if you want to buy something, it is your choice.” As a teenager, Justine appreciated that her mother gave her that freedom, and she felt motivated to find lots of clients and work hard at the business, which she continued for about five years. She earned around 8,000 Burundian francs per day from donut sales. “I still make donuts for my friends, but I just give them away now,” Justine said.

When she moved to Maine, Justine started attending classes at In Her Presence. “I really appreciate the help I have gotten education wise from In Her Presence. They helped me to be comfortable speaking English.They gave me hope and confidence to aim higher, and to believe that I can better myself, and help others along the way. Thank you to In Her Presence for the trust and responsibility you have put in me. And they have stood strong for us during this pandemic. Without their help, I don’t know what we would have done – we need their support, their food, their financial assistance, their spiritual support – in all ways they really stand up for us.” 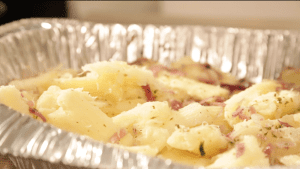 As told by Justine Mugabo:  In Burundi and other countries in East Africa, people eat a lot of cassava. You can eat the leaves, and the roots. Everyone eats cassava – poor people and rich people alike. Here in Maine, it’s found at Hannaford in Portland and in the African markets. I shop at Moriah because she has all the things I want, and there are some things I can only get there. The other Hannaford stores don’t have cassava, which is too bad. I live in South Portland, and it’s hard to get to the Portland Hannaford to buy it.

This is a quick method for cooking cassava, made with frozen cassava root. You can eat it with chicken, vegetables, or anything you want. If I could, I would eat it a lot, but like I said, I have to wait until I can shop in Portland.

Defrost frozen cassava root, and wash it very well. Then boil it in salted water for about 15 minutes. Drain the water. In a separate pan, heat olive oil or butter, add diced onion, and various colors of peppers all diced, as well as a bouillon cube of beef or vegetable broth – I use the Magi brand – mix thoroughly, and add to the cassava. Mix everything together, and it’s done!