Juneteenth celebrated in Portland with vision of future 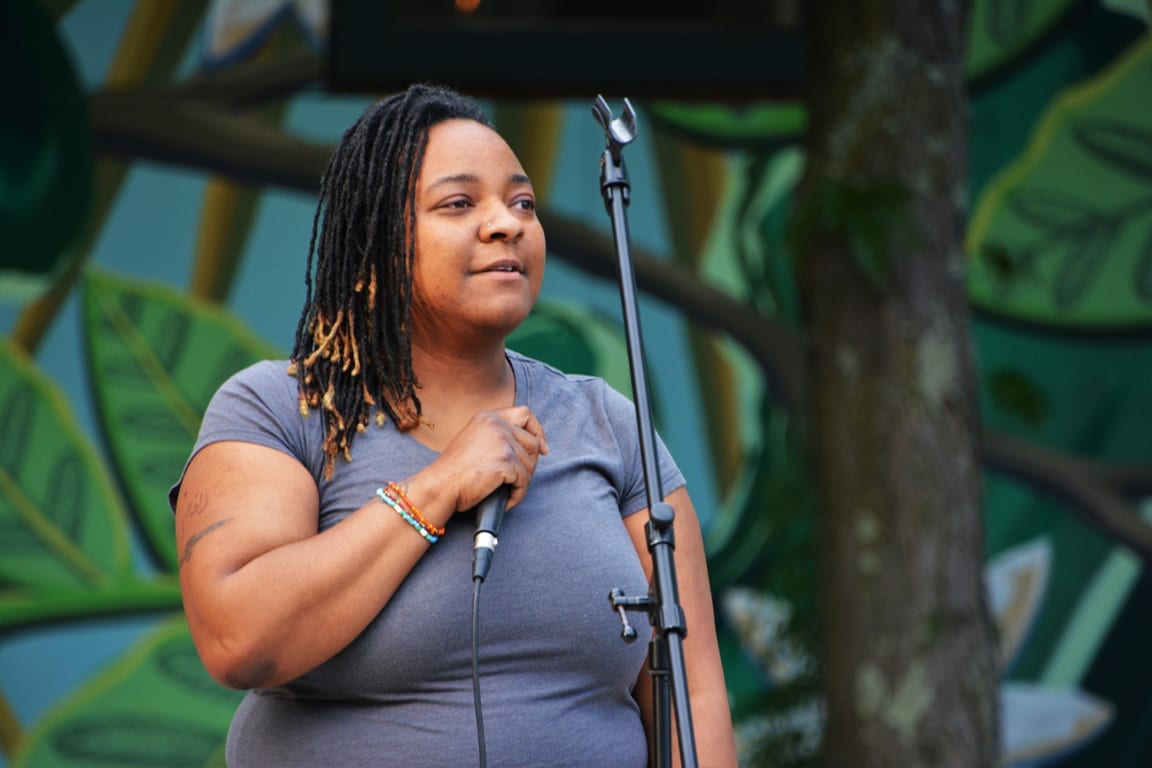 When artist and activist Athena Lynch organized a celebration in Portland last year to commemorate Juneteenth, she quickly discovered that many people had never heard of the holiday. But the celebration was a success, and those who participated gave her much positive feedback.

So Lynch decided to stage an even larger celebration this year – one that would combine art, celebration, and education – and she teamed up with a variety of other organizations on a two-day celebration. Maine Inside Out (MIO), Maine Youth Justice, Friends of Congress Square Park, Little Chair Printing, and Love Lab Studios all participated.

The origins of The Weeping City date back 10 years to when Nancy Valmond-Bell, an MIO volunteer, came up with the idea of creating a work of art expressing the concerns of the Black community in Portland concerning police brutality. MIO facilitated an afterschool project that brought together a group of young people to create the play through storytelling and “theater of the oppressed” exercises, a method of dramatizing and discussing forms of oppression. 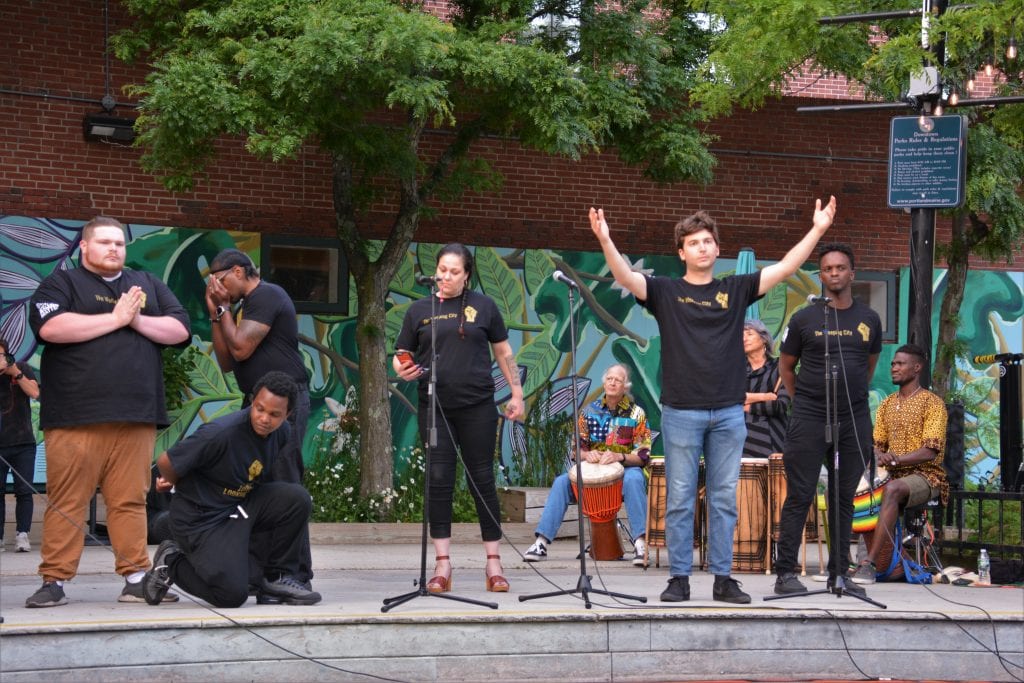 “We decided to make the play The Weeping City. And 10 years later we are still fighting for justice and peace for Black and brown lives all over the world,” said Valmond-Bell.

Bruce King, Maine Inside Out’s co-executive director, recognizes the importance of people coming together, especially when it comes to moving the community forward.

“Part of the reason MIO utilizes theater is because it’s a collective effort that brings people together,” King said. “Congregating in itself is a political act, a social act. It’s the core of humanity… to have us learning about Juneteenth, and working through what it means together is an incredibly powerful experience.”

After last year’s Juneteenth celebration, Lynch realized it wasn’t just the adults who benefited from the events – young children did, too. So one of Lynch’s goals this year was to incorporate activities that were geared toward young children.

“The kids are definitely paying attention …. How crazy is it to have a 4-year-old roll up and ask, ‘Do you know what Juneteenth is?  [Even] 4-year-olds are starting these difficult conversations with adults about Juneteenth and liberation,” Lynch explained. 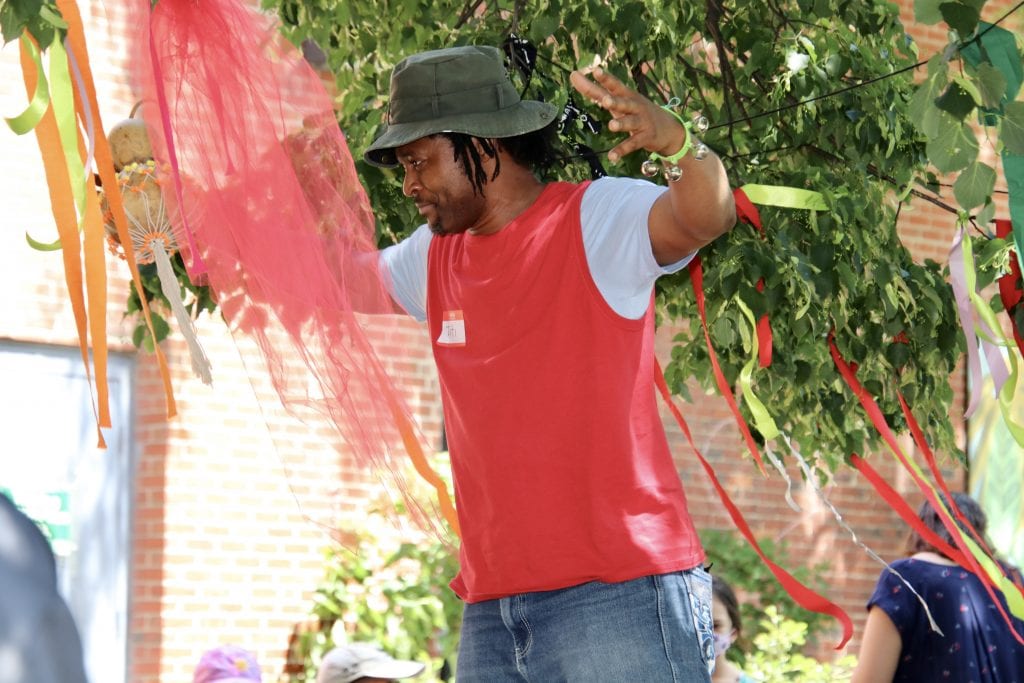 Artist Titi de Baccarat launched the events on Saturday, June 19, by regaling the audience with stories from his native Gabon. Throughout the day, there was a chalking area, printmaking station, and bracelet-making booth, all designed to engage the young and the young-at-heart. Maine Youth Justice had a booth, and so did performing artists Signature Soul.

Children found plenty to do at the celebration | Photo Steven Bridges

To feed attendants, Yardie Ting was on hand, serving up authentic Jamaican dishes with a modern twist. And toward the end of the celebrations, Portland City Councilor Pious Ali read the city’s official proclamation for Juneteenth and presented it to Lynch.

Lynch’s ultimate goal is for the city of Portland to create a citywide, official Juneteenth Day celebration. “Juneteenth is the perfect vehicle for combining art, community, action, celebration, dialogue, and education,” she said. “You don’t have to just learn in a classroom. Learning is a continuous thing in life.”

“My artistic practice is to be an artist that is in a community and actively creating as a part of a community … creating art that not only the community appreciates, but represents them,” she said.

Lynch moved to Maine in 2014 and attended Maine College of Art in Portland, drawn by MECA’s public engagement minor, which aligned with her artistic practice.

“My work is about communicating Black life, whether it’s from the past, in the present, or what it will look like in the future,” Lynch explained. She graduated in 2020 with a major in sculpting.

Although the past year has been difficult and treacherous, she believes it also caused an awakening. Prior to the pandemic, she said, “Everyone was too busy and kept in their own worlds. But the pandemic caused people to reflect, react to the murder of George Floyd, and realize the systemic injustice that has hurt the Black community, not just nationally, but internationally as well.

“The pandemic caused everyone to shift their focus… that was monumental,” Lynch said. And the more people educate themselves, and continue to support one another, the better the future will be, she believes.

“We are like a hand, where individually we aren’t doing too much, but when we come together we make a mighty fist,” she explained. “That is how I see our community, and society as a whole. We are becoming a mighty fist. And the stronger we become, we will bring up the other fist, too. And these fists are creating action.”