“A good leader impartially helps every member of his or her nation, whether rich or poor.”

Among those invited to attend the historic January 2 inauguration, at the Augusta Civic Center, of the first woman governor in Maine’s history were many immigrant community leaders. Those who talked to Amjambo Africa! after the ceremony said this was the first time they had been invited to a political event of this level of importance in Maine. Many immigrants also were invited to Governor Janet Mills’ inaugural ball on January 4. They expressed great satisfaction at being welcomed at both events and shared their relief that the eight years of Governor Paul LePage’s administration are now over, and that a new, more inclusive era has begun in Maine.

Three African-born children participated in the inaugural ceremony. Alain Igiraneza, a student at Casco Bay High School, originally from Burundi, sang the national anthem; and Shy Paca and Natalia Mbadu, from Angola and Democratic Republic of Congo respectively, both students at the Reiche School, sang “Girl on Fire” by Alicia Keys. The children’s singing was heartfelt and vibrant, and brought the crowd to its feet. Batimbo United, a group of acclaimed Burundian drummers and dancers from Portland, performed at the inaugural ball.

The election of Governor Mills reflects the difference between the political process here in the United States and what many Africans experienced back home. In African countries, the transition of power after elections is often shadowed by allegations of rigging the vote. Civil unrest and conflict – or rumors of these – cause people to be fearful after elections, rather than celebratory. Often, people stay indoors in the days following an election because of fear of violence. New Mainers who were born and grew up under authoritarian or corrupt leaders are learning a great deal from the peaceful transfer of power in Maine. They note that the inaugural week in Maine was joyous and peaceful, and they are impressed by how democracy works in the United States.

Janet Mills’ values of unity and inclusivity shone throughout her inaugural week’s events. Her plan to place a sign reading “Welcome Home” at the entrance to Maine from New Hampshire resonates deeply with those building new lives in Maine. 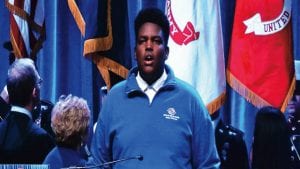 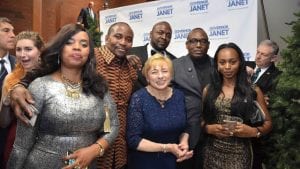