Chaos at the Capitol in Washington, D.C.

Many observers noted the difference between how gently the white rioters in the Capitol today have been treated, in comparison with how Black Lives Matter protesters were often treated in the aftermath of the murder of George Floyd

In Washington, D.C., Trump supporters stormed the Capitol building on the afternoon of January 6 in an effort to stop the  counting of the electoral votes certifying Joe Biden’s election. This certification of the votes is normally so uneventful that it receives little attention, however today’s events were anything but uneventful. The Capitol police appear to have been unprepared for the breach of the building. As of 5:00 p.m., from the locations where they had sheltered in place for over three hours, legislators were insisting they will carry on with the electoral process as soon as they can, possibly as early as tonight.

President-elect Joe Biden called today’s events an insurrection. He said, “Democracy is under unprecedented assault in the citadel of liberty, the Capitol itself. This is an assault on the rule of law …[and] does not represent a true America, who we are. This is a small number of extremists dedicated to lawlessness.”

The chaos of the afternoon included at least 15 calls for injuries, one shooting resulting in an individual in critical care, teargas in the rotunda, gas masks and oxygen hoods, at least one improvised explosive device on the Capital grounds, lawmakers and reporters taking shelter under chairs, lawmakers praying, broken glass, pepper spray, an attempted replacement of the American flag with a Trump flag. At least one congressman was trapped while the mob tried to ram in a door. Vice President Pence and Speaker of the House Nancy Pelosi were escorted out of the Senate chamber to safety by police while other lawmakers were told to seek safety. Pence and Pelosi are second and third in line to the presidency. A curfew has been announced in Washington, D.C. beginning at 6:00 p.m. tonight.

Leon Panetta, former White House Chief of Staff, said on tv, “This is a moment where you know that our democracy is indeed fragile. If we don’t take the steps now to restore order … it literally could undermine our democracy itself.”

Amjambo Africa Publisher Georges Budagu Makoko, from DR Congo, who has experienced violence connected to elections in Africa, said, “I pray over this beautiful country. I hope people who are involved in the conflict will come to realize that peace is very fragile. This is like playing with fire, knowing that you run the risk of burning your own house. When you start a conflict, you never know how it will end, and when.”

Earlier in the day, before the rioters entered the Capitol, he said, “When I read on social media about the possibility of people taking to the streets today with guns to support Donald Trump, I feel afraid. Many New Mainers come from parts of the world where violence connected to elections is expected. I don’t know what to expect.” 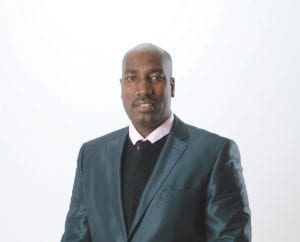 Many observers noted the difference between how gently the white rioters in the Capitol today have been treated, in comparison with how Black Lives Matter protesters are often treated. Rioters repeated President Trump’s repeated false insistence – including today, during the insurrection – that the election was stolen. Common slogans visible during the riot included “Don’t Tread On Me” and “Stop the Steal.”

As of 5:00 p.m., the Capitol had not yet been secured, though the National Guard and Capitol Police were visible in larger numbers than earlier in the afternoon.