‘I Am An American’ at Cove Street Arts 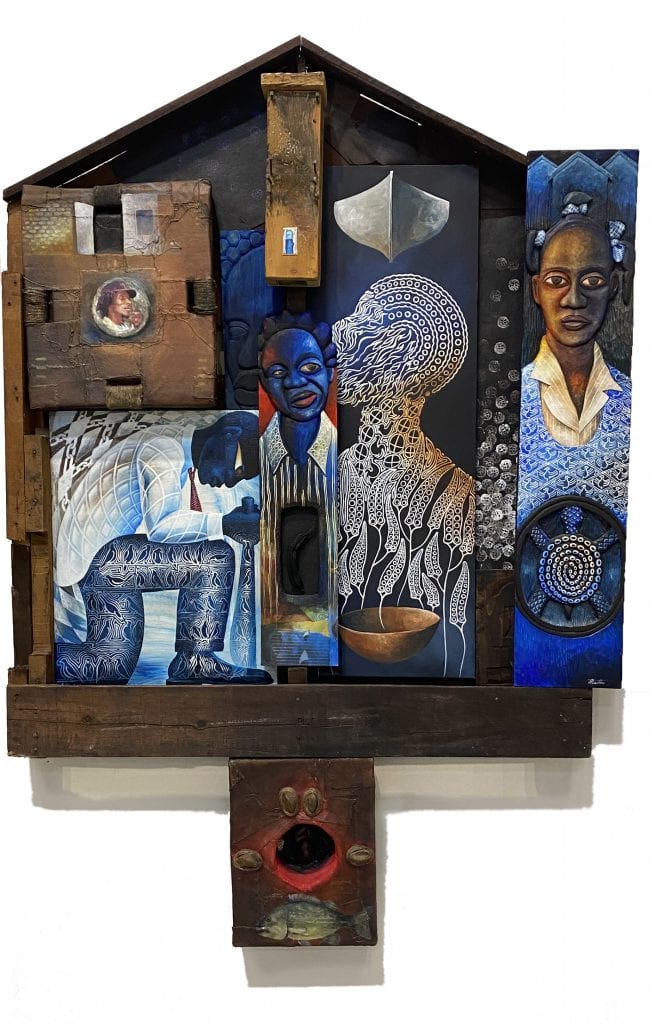 A Distant Holla by Daniel Minter

What does it mean to be American? Is being American tied to geography, or does it describe a certain set of ideals? Can one become an American, or is it exclusively a birthright? These are the central questions that five Maine artists – Daniel Minter, George Longfish, Leonard Meiselman, Natasha Mayers, Robert Shetterly, – explored in the exhibition “I Am An American” at the Cove Street Arts gallery, 71 Cove Street, in Portland. The exhibit opened November 12 and will close January 16, 2021.

The United States has been multicultural from the founding of the nation. Throughout its short history, major waves of immigration from Europe, Asia, and South America have peopled the land. In addition, hundreds of thousands of enslaved Africans were brought to the young nation between the 17th and 19th centuries. The only indigenous people are Native Americans, who today comprise just 2% of the total population. Everyone else is an immigrant – or is descended from one.

John Danos, the co-director of Cove Street Arts and co-curator of the show, spoke about the conception of the exhibition. “Going back to the lead-up to the Civil War, Theodore Parker coined the notion of the ‘American Ideal’ which arose out of the Declaration of Independence. I thought it was an interesting place to start,” he explained, pointing out that the Declaration of Independence, written in 1776, states that all men are created equal and are endowed with certain unalienable rights, namely “Life, Liberty, and the pursuit of Happiness.”

And yet, Danos said, some of the Founding Fathers who signed the Declaration were enslavers. Not until over a century later, after the adoption of the Thirteenth and Fourteenth Amendments, did Black people gained citizenship. However, Danos believes that equating citizenship status with an American identity is a simplistic view that doesn’t account for the millions of people who are undocumented but who live in the United States. Nor does it address the vastly different lived experiences of people of different ethnicities. 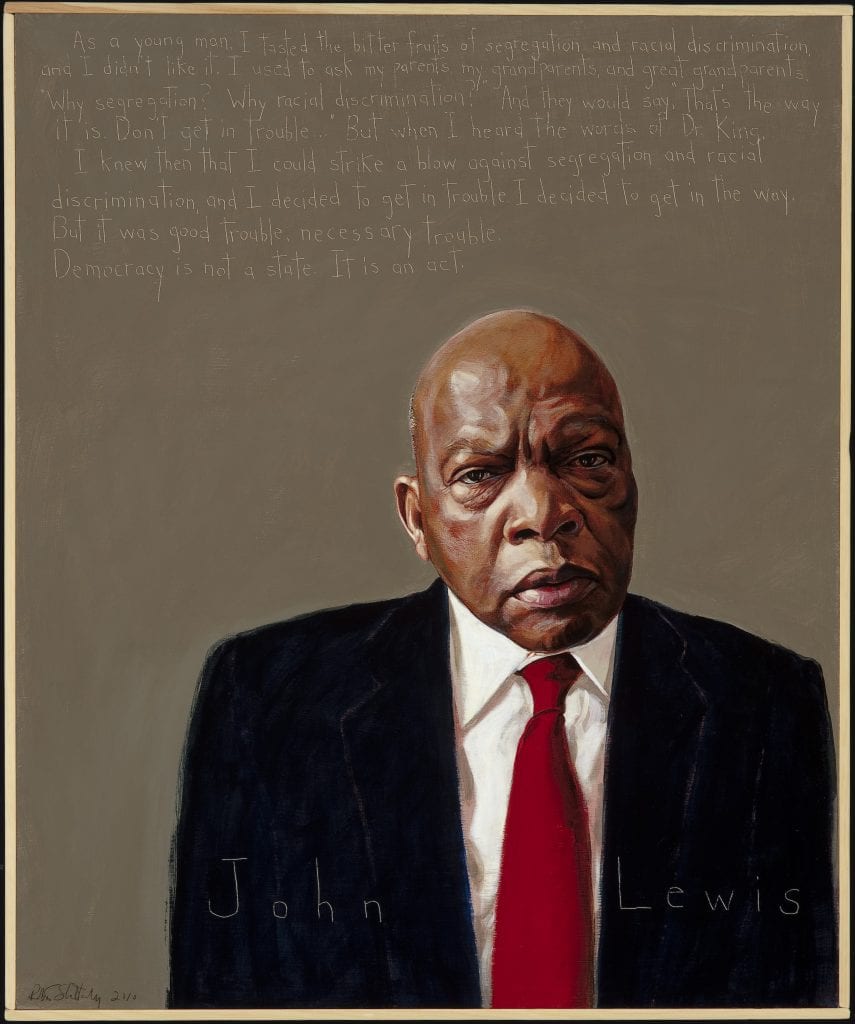 “The build-up to the recent election was an impulse for this exhibition because we’re struggling for an identity as Americans,” said Leonard Meiselman, artist and co-curator of the show. His works are somber in tone, often done in only two or three colors – predominantly blacks, grays, and reds – reflecting the complicated history of the United States and the identity crisis the nation is experiencing. His pieces feature human-like shapes enveloped in a blood-red background and they are as haunting as they are powerful. “I’m committed to painting as an outcry against injustice,” the artist remarked.

Meiselman’s painting “Asylum Seeker” depicts a pair of eyes looking at viewers, as if urging them not to avert their gaze, and calling attention to how the public turns a blind eye to the current global refugee crisis. “My mother was an asylum seeker from Russia,” said Meiselman. “My parents came here in search of security and to better their lives – and they did.” However, immigration laws have become stricter since then, and today not many asylum seekers are given the privilege of settling in the U.S. “It’s a struggle. A fight for what we love, and what we really believe in as a nation. As an artist, I grew up believing that art is a vital part of that fight,” he said. 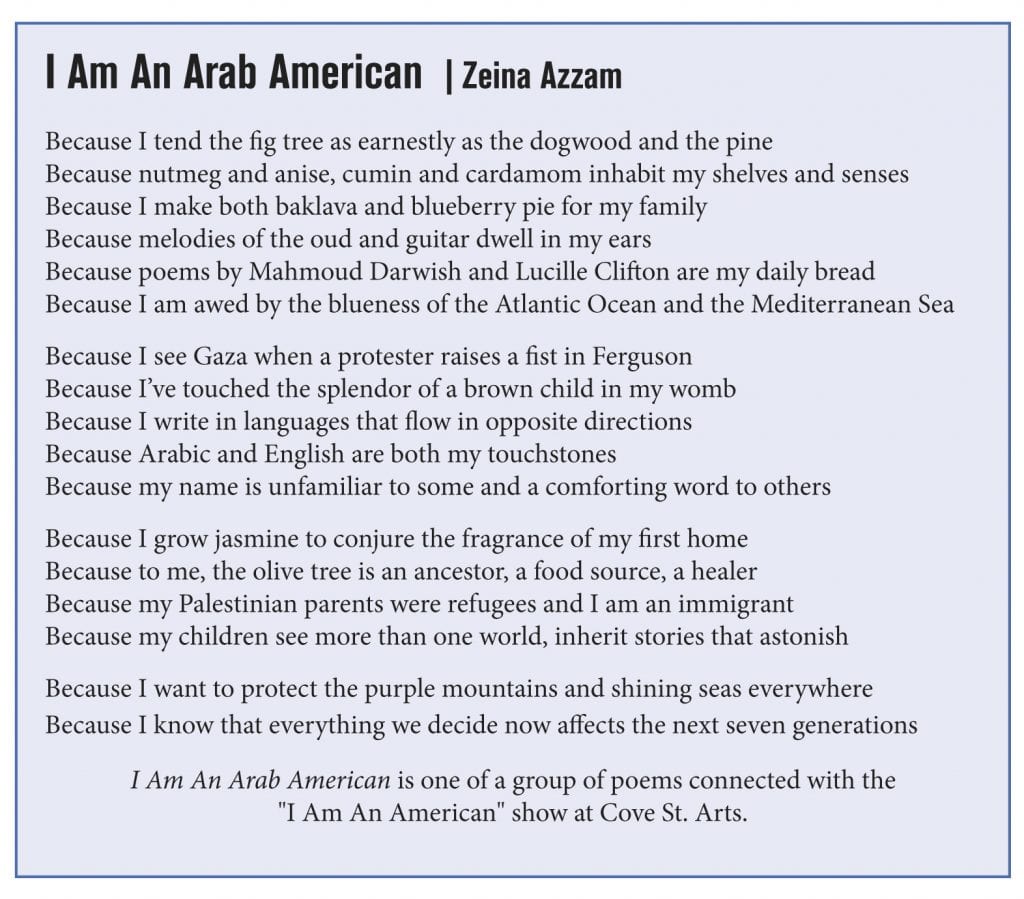 The exhibition includes spoken poetry and the result is a cohesive audio-visual experience for the viewer. The poets chosen to present their work are all from Maine and reflect different ethnic, cultural, and linguistic backgrounds. Just as with the paintings, all the poems were written in response to the title of the show, “I Am An American.”

“Poetry is people opening their hearts,” said Gary Lawless, curator of the exhibit’s poetry (as well as poetry editor of Amjambo Africa). “It enables us to get along better with each other if we hear each others’ stories – it builds a better community.” Lawless believes art plays an essential role in discussing issues we face as a society because it provides other avenues for considering and reflecting that we cannot easily access by consuming news sources.

Artist, teacher, writer, and curator George Longfish (Seneca/Tuscarora), whose work has influenced the field of contemporary Native American art over a period of four decades, blends pop art and Native American motifs, juxtaposing the modern and the traditional with iconic images from the past and the present. Longfish’s work doesn’t force a narrative on the viewer, but shines light on Native American history and stories that are often left out of the narrative constructed by the mainstream. Longfish said an example is Thanksgiving, with its complicated history; not many know that the Wampanoag tribe was massacred only 16 years after they shared the Thanksgiving meal with the Pilgrims. “I’m not holding anyone to blame,” the artist explained. “I just present the facts, and the viewer has to make up their own mind.”

Combining activism with art, Natasha Mayers is sometimes called “the most committed activist artist in Maine.” Her work explores themes of power, militarism, and social justice. “I’m dealing with ideas of power, or rather men’s intoxication by it, and exploring the various roles men take in the world and the violence that’s part of their rule,” explained Mayers. Her pieces for this exhibit depict men’s chests either donning military uniforms complete with decorations or nude, adorned with tattoos. “America is built on militarism, and its business is making weapons for sale to the world, producing endless wars.” Mayers said it’s hard to be angry all the time, which is why her work is meant to be saturated with humor, irony, and eccentricity, while raising serious issues for the viewer to consider. 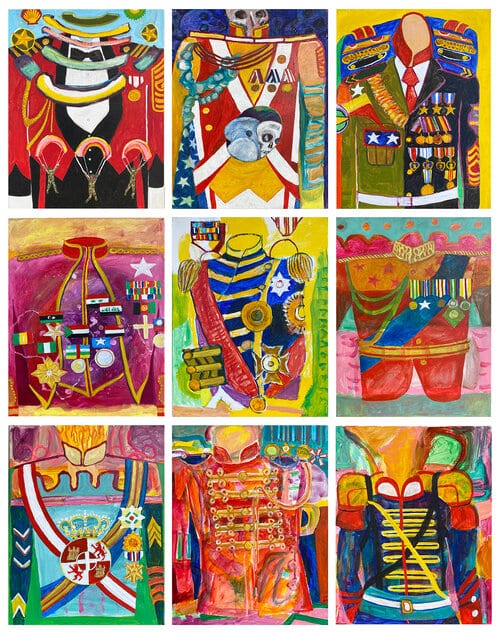 Impeach the Emperor by Natasha Mayers

Daniel Minter’s work focuses heavily on themes of displacement, the notion of “blackness,” spirituality, and the meaning of home. Using the mediums of painting and assemblage, he tells the story of Black Americans who have historically been denied an American identity. “Rather than being an American, I’m more of an American byproduct,” the artist said. “I was never meant to be an American citizen, I was meant to be property, to have no legal existence.” He confessed that even today he finds it difficult to state that he’s American. “In technical terms, I am an American citizen. But what does that mean?” he asked. “It doesn’t get me the same things it gets a white person.” Growing up in segregated Georgia, Minter faced considerable discrimination, and was taught to tread carefully around white people because of the power they wielded. “It was a system where the institutions built in constantly let me know that I didn’t belong here,” he recalled.
Inspired by African American and Southern traditions of woodcarving, Minter often incorporates woodworking into his art. “My work is a conversation with itself and my way of expressing a conversation with myself,” the artist noted. Minter doesn’t view his artworks individually: each piece is an answer to the previous one, combined as part of a never-ending conversation. This is his way of portraying a disjointed America. “Since the beginning of this country, we have manufactured two Americas – one America that is an authoritarian state and another that believes itself to be a free state,” Minter described. “The two ideas are so contradictory that I doubt we’d ever come to a consensus about one idea of the meaning of being American.” 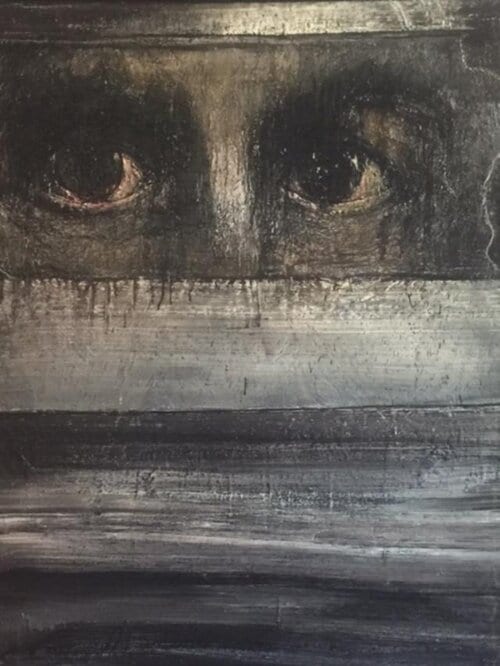 Asylum Seeker by Leonard Meiselmanone idea of the meaning of being American.”

Robert Shetterly holds a more hopeful view of the future of the American identity. For nearly 20 years, he’s been working on a series of portraits called “Americans Who Tell the Truth” which he started in the run-up to the Iraq War, following the attacks of 9/11. Disturbed by government propaganda that fueled that war, he felt the need to make a statement about corruption and the deceit of the American people. He has dedicated his career to painting Americans he considers worthy of the values of this country, who have dedicated their lives to trying to force America to live up to its own ideals.

“The central irony of American history is that we claim to believe in those American ideals, but enormous amounts of time, blood, determination, and perseverance had to be dedicated by an awful lot of people, particularly marginalized people, to try to make those ideals real for everyone,” Shetterly said. He believes that the country was premised on racist hypocrisy, that vast amounts of power and wealth have accumulated at the top of the system, and that those profiting from the status quo will resist any change. “What happened in the last four years suddenly exposed a lot of what this country really is, in terms of race and inequality,” the artist said. “Thanks to the Trump administration’s blatant corruption, this country has been given permission to examine its own behavior, to examine what Americanness really means – not what it supposedly stands for – and the price paid for that Americanness.” 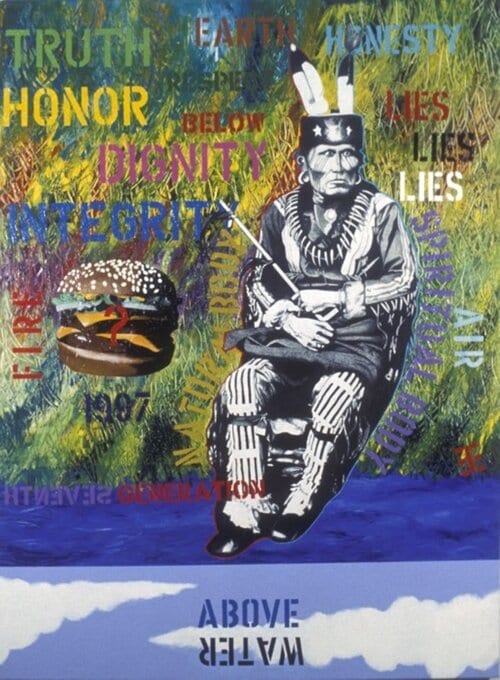 As Above So Below by George Longfish

He noted that while we can’t go back and change the 400-year history of the country, we can start to make things more fair. In order to dismantle the foundation of inequality that the country was built on, we first need to acknowledge that history. “To me, saying ‘I’m an American’ means that I’m someone who believes in the values of this country,” Shetterly said, ”and believes in the values enough to be willing to make sacrifices so that America becomes the country it claims to be.”

Featured image on homepage by Daniel Minter, States of … #5