Health & Fitness Through an African Lens

“Life is the foundation on which everything else is built, the most precious thing we have, so we have to take care of it. We only live once.” 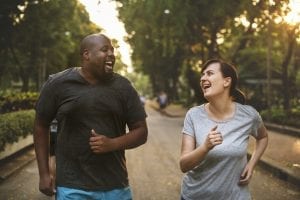 African-born Mainers who spoke to Amjambo Africa! this month remarked on the huge cultural differences between Africans and Mainers in relation to attitudes toward health. Healthy eating, exercise, and weight control are serious concerns for Americans, with losing weight one of the most commonly shared goals. In fact, according to the Centers for Disease Control (CDC), 50% of Americans aspire to lose weight. Therefore, a social compliment related to losing weight is very well received in America. In most African countries, by contrast, losing weight has a serious negative connotation. Weight loss is viewed as a sign of poverty, hardship, and precarious living conditions, while gaining weight is seen as a sign of abundance and prosperity.
After coming to this country, before they realized that Americans are so focused on losing weight, some people told Amjambo Africa! that they had made serious mistakes by complimenting their new American friends about weight gain! These “compliments” turned out to be unintentional insults, from the point of view of their friends. Our sources had to explain to their friends that, in most African countries, saying someone is looking good after having gained some weight is considered a compliment. They joked that back home they never had to worry about weight loss!
The American cultural norm of trying to lose weight has started subconsciously impacting them, some people told us. They said that back home they never wished to lose weight or thought about weight gain as a health issue. But now social media and advertising are seriously affecting their attitudes about what is considered beautiful. Currently, rich people in Africa who can afford enough food to eat have started to think about weight control as an important element of health.
The culture of exercising is still a rare practice in Africa. Exercising is considered a social event rather than part of a healthy lifestyle. For example, young people may get together to play soccer or basketball. By contrast, in summer here, Americans of all ages flood streets and public spaces, running and biking for exercise. Some people even wake up early in the morning and go to fitness centers before work. The economy reflects the importance of this cultural norm in American society, with the fitness industry generating billions of dollars every year.
Finally, some African-born Mainers shared that they worry about the quality of food they eat now. Back home most food was organic and unprocessed, unlike here in America. They told Amjambo Africa! that they wish they knew more about what American foods are healthy to eat and what foods are not. In Africa, when the author of this piece was growing up, anything that would put weight on a person was considered healthy – especially milk, meat, beans, and potatoes. Vegetables were plentiful, but many people did not like them. People used to joke that eating vegetables was being like goats or cattle who eat grass!