For many New Mainers, taking college classes and earning a degree can be a valuable step toward building community connections, practicing English, and gaining important job skills. However, finding funding, as well as the right match of school and major, is challenging. Sara Namwira and Vanusa de Paula Chico both attend Southern Maine Community College (SMCC), and they agreed to share their stories, in the hopes that their stories would inspire others. 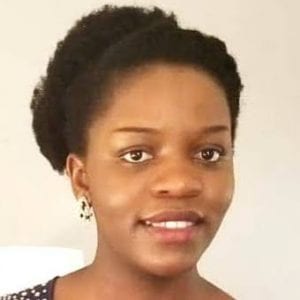 All of her life, growing up in Congo, Sara Namwira’s father encouraged her and all her siblings to pursue higher education. When she was about to begin her senior year of high school, her family received a call from the U.S. Embassy, saying they could join Sara’s father in Maine, where he was already living. As soon as they arrived, Sara enrolled in high school. She spent a lot of time listening to English songs, watching movies with subtitles, and reading as many books as possible because she knew she needed help with English. And she also spent time with a supportive high school teacher, who explained the language while correcting her essays. That year, Sara didn’t have much time to research colleges or scholarship opportunities, but she spoke with her guidance counselor before she graduated about the steps she’d need to take to go to college in the future.

Her plan was to pursue a medical degree. Since she was a little girl, people had called her “the doctor” because that’s what she always thought she wanted to be. But she decided wanted to be sure of her career choice before she began. So, after she graduated from high school, Sara earned a Certified Nursing Assistant (CNA) license and worked as a CNA for a while. She realized that doctors don’t get to spend much time with their patients, so she changed her goal. Now she is working toward becoming a nurse practitioner.

Once she had chosen a career, Sara researched colleges that offered nursing degrees. On her list were SMCC and the University of Maine. She chose to pursue SMCC because it was the most affordable and was closest to her family. Next, she connected with an advising officer at SMCC who guided her through the steps she needed to take to submit her application.

Sara’s advice for those considering college is to first get experience in a field to see if it’s the right fit. “For example, before saying, ‘Yeah, I want to be a teacher!’ it would be better for you to stand in front of the students and see if you like it!” she said. When she worked in the intensive care unit of a hospital, she experienced the stress associated with the medical field. However, at the end of every day, she always wanted to know more about caring for patients. She said that a good measure of whether a field will work out is to try it, and see if it remains interesting over time.

Like Sara, Vanusa de Paula Chico comes from a family that placed a strong emphasis on education. When Vanusa was only 15 days old, in her native Angola, her mother left her in the care of her grandparents so that she could study nursing at a high school in another province. Because of civil war, Vanusa’s mother was unable to visit; she didn’t see her daughter again until Vanusa was 4 years old, after her mother had finished the nursing course. After that, her mother continued to study and earned two more degrees.

Vanusa trained as an engineer in Angola, where she worked in the field prior to arriving in Maine in 2019. During her first year in Maine, she earned certificates in office skills and accounting, as well as a high school diploma, through Portland Adult Education (PAE). She represented her fellow graduates at PAE’s 2020 ceremony, an honor that meant a lot to her. At the graduation ceremony, Vanusa was awarded a Scholarship for Maine Immigrants. While at PAE, she attended English classes and a college transition program, where she learned about SMCC and about some scholarship opportunities. Vanusa received an Adult Learner Scholarship from Maine Community Foundation. She attended an orientation session at SMCC to learn more about the school before making a final decision about whether or not to enroll.

Vanusa comes from a family of businesswomen. Her grandmother sold food, cleaning products, and clothes, and her mother, in addition to working in the health field, sold furniture and construction supplies. While in Angola, Vanusa herself ran a small business. She created and sold flower bouquets, food baskets, and birthday gifts, among other products. She said she’d like to open a similar small business here in Maine and work as a sales manager. Her goal is to graduate from SMCC with an associate’s degree in business, and then earn a bachelor’s degree at the University of Southern Maine. She’d eventually like to earn a Master of Business Administration. Vanusa’s advice to other adult immigrants looking to pursue college is to go to Portland Adult Education to learn English, join the College Transitions Program, and research scholarship opportunities. She said it’s important not to be discouraged by a lack of English skills. “Be patient and proactive,” she advised. “It’s not all about earning money. It’s about achieving your academic goals.”