cPort President and CEO Gene Ardito transitioned from working in corporate America to cPort Credit Union in 2004. After years at Fleet Bank, Unum, and Central Maine Power, he says he was attracted to the credit union “…partly because I had never had an opportunity to do anything local, to be involved in supporting or providing services to the community, and the possibility excited me.” Unlike many banks, cPort is a local financial institution, with membership open to anyone who works or lives in Cumberland, Kennebec, Androscoggin, Sagadahoc, or York counties. “ ‘Community’ is one of cPort’s core values, and it’s been a great fit for me,” says Ardito.

For Mr. Ardito, being involved in the community is personally satisfying and it’s good for business, too. The institution counts 80 employees, five branches (including a new one at 35 Middle Street, Portland), over $200 million in assets, over 21,000 members, a designation as one of the best medium-sized places to work in Maine for two years in a row, and a healthy growth rate, on top of a strong connection with a variety of different segments of the community. This success indicates that Mr. Ardito may be on to something.

“Community,” as Mr. Ardito and cPort define it, includes “people who have been in Maine their whole lives, people who have just arrived, people with limited means, people who are affluent and want to acquire a new property, and people who have had credit issues and need a second chance.” He says cPort operates the same way for everyone. “We try to meet the needs of all our members, no matter what their circumstances. We don’t favor one group over another.” 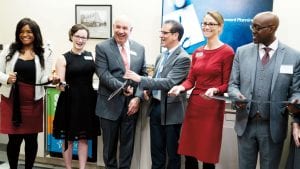 cPort embraces community in many ways. These include an 11-year-old partnership with public elementary schools, now called cPort University, which encourages children to start thinking about getting a college education at a young age; a “Clean Slate” account for those who have made financial mistakes; a “Citizenship” loan program that helps newcomers with expenses involved in obtaining a green card, citizenship, travel expenses, legal fees, or petitioning for alien relatives; financial education workshops; a “Welcome” account to help asylum seekers with legal fees until they obtain work authorization.

cPort values connecting with Maine’s immigrant community. “Maine needs people” Mr. Ardito says. “Assisting people coming into this country is pragmatic. They are phenomenal [credit union] members.” New Mainers who are successful may buy a house, buy a car, or start a business. “We have grown because we have people coming from other countries who fill jobs, rent apartments. Our kids going to school with kids from other parts of the world have an advantage. They already know the world. They won’t be shocked when they leave home to meet people from other places. The multicultural nature of Portland is helping us all. Helping New Mainers helps us all.”

Language barriers are frequently cited as a deterrent to doing business with New Mainers, but cPort has overcome these language barriers. cPort has hired New Mainers, including African-born employees, all of whom are multilingual. “Our employee base is very diverse,” Mr. Ardito notes. All cPort’s brochures are translated into five languages, they provide access to interpreters for speakers of other languages, and they plan a series of videos focused on financial literacy.

Mr. Ardito is familiar with language barriers, as well as other struggles associated with immigration. A first-generation American, his grandparents and mother came from Italy in 1939, when his mother was six years old. They lived in a small Italian section of Providence, Rhode Island, where his grandparents began by working in the mills in the 1940s. His grandmother spoke broken English her whole life. The family referred to her brand of English as “Itanglish.” His grandparents saved money, eventually bought a multi-unit house and started renting to others, all while sending money back to Italy to help family. His mother attended good schools, and “…it turned out great,” Mr. Ardito says. “It’s good to help immigrants through challenging times. The notion of people coming from other countries is not new – it’s what America is all about.”

In the end, the focus of a credit union, of course, is on its members. “Our members own us. We have no other shareholders,” says Mr. Ardito. “And we treat everyone the same.” Taking the long-term view, cPort asks, “Is this new member going to be good for us in the long term?” They don’t categorize people according to how quickly each membership is going to be profitable. “Even if you open an account with just $5.00,” he says, “we treat you as an equal member.”

Ardito’s message to the community is this: “We want to know if we are meeting your needs. If not, please come talk to us. Is there something more we can be doing? Please let us know what it is!”