Warsan Shire: No one leaves home unless home is the mouth of a shark

To someone from the Congo, if you lay an open hand on top of a fist, the gesture means “You’re talking too much.” If you call someone over by beckoning with your index finger, the gesture is an insult. These were some of the tips shared with those who attended the cultural training and information session held at Gateway Community Services in Portland on Saturday, August 10.

The two-hour session was led by Family Promise of Greater Portland, Catholic Charities Refugee and Immigration Services, and Yarmouth Housing Initiative, and was designed to help prepare host families who have welcomed – or are thinking of welcoming – asylum seekers into their homes. 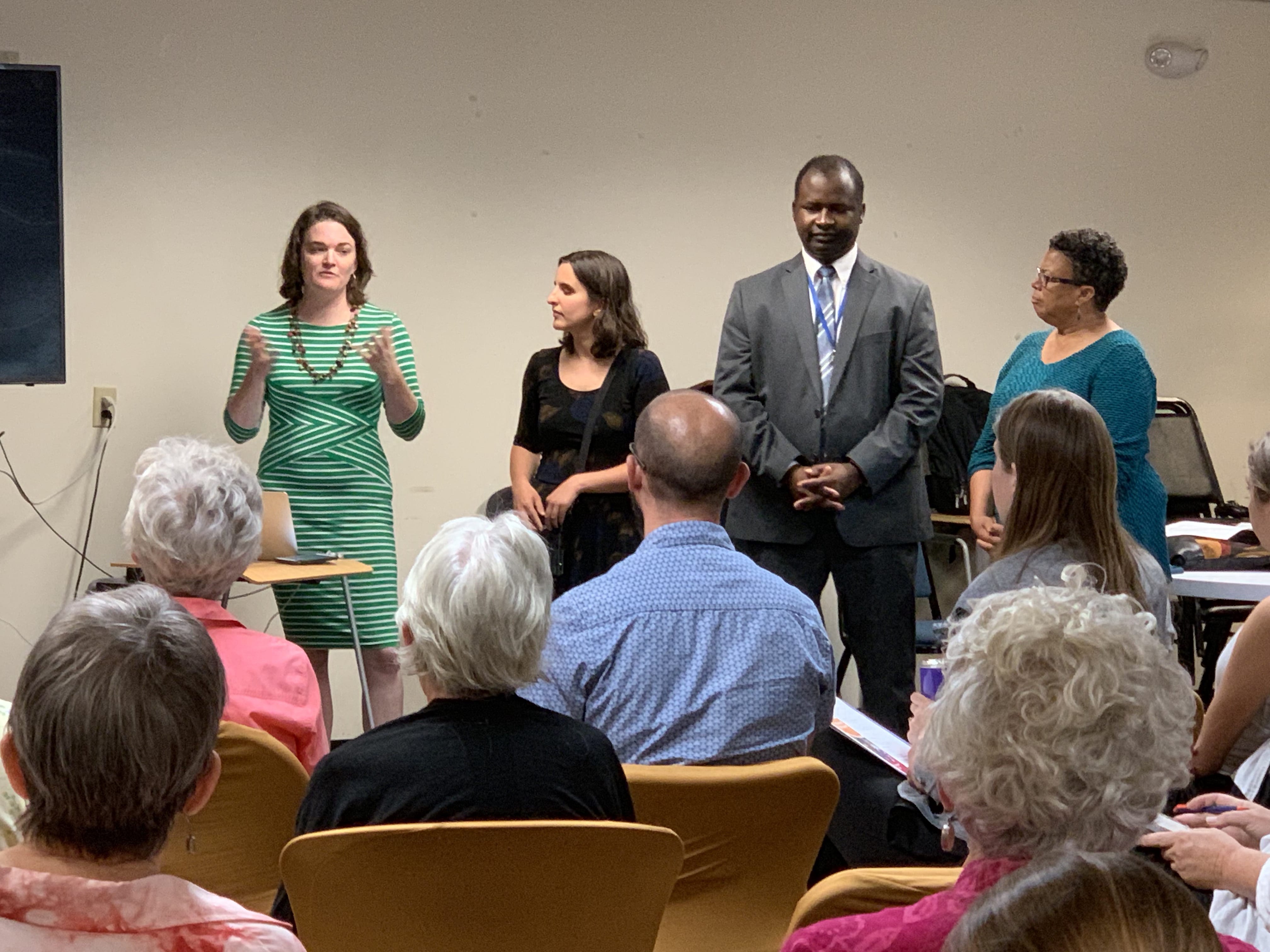 With the date for final move-out from the Expo Building set as Thursday, August 15 due to contractual obligations, the Expo was closed to new arrivals by August 10. Any new families that arrived in Portland after that date are being referred to the Family Shelter. According to Jessica Grondin, Director of Communications for the City of Portland, as of August 12 the Family Shelter was full, so any asylum seekers not placed in other housing by August 15 may have to be moved to the overflow shelter.

Much of Maine suffers from an affordable housing shortage, and the presenters at the cultural and information training explained that many homeless people in the Greater Portland area without shelter sleep at night in the overflow shelter, because the Portland Family Shelter has been unable to accommodate all those in need for the last four years. However, the overflow shelter is only available at night, and sleeping arrangements are a mat on the floor of the Salvation Army –difficult circumstances for anyone, let alone for a family with young children.

Dana Totman, President at Avesta Housing, has emphasized that finding long-term housing solutions for these recent asylum seekers is challenging. “We already have over 2000 people on a waitlist for housing. If it was easy to find housing in neighboring cities we wouldn’t have 2000 people on our list. This situation shines a light on the affordable housing crisis that exists in Maine.” 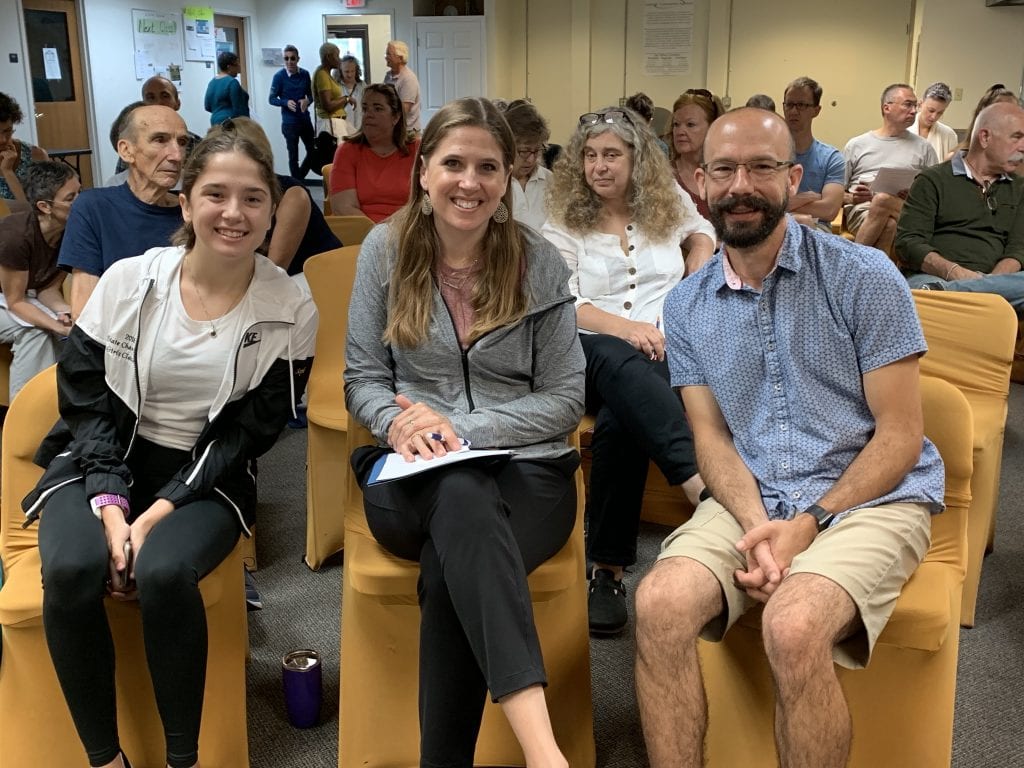 When Kristina Egan, Executive Director of Greater Portland Council of Governments (GPCOG), was alerted that there was a  wave of asylum seekers arriving in Maine this summer, she gladly convened a coalition of faith-based and secular organizations, with the goal of figuring out a temporary housing solution for the gap between when the Expo needed to be closed, and summer housing stock opened up. The coalition created the host family program. Immigrant leaders were involved in the coalition from the start, and these leaders recommended that if a host family program was to be successful, cultural training on both sides would be needed. Saturday’s session was the first cultural training geared to host families. The asylum seekers began receiving cultural training while still living in the Expo Building.

Those in attendance at the training asked questions throughout the presentation, clearly wanting to learn all they could in order to welcome their guests appropriately. Topics ranged from pets, to transportation, to food preparation, to communication strategies, to parenting styles. The ages of the approximately 80 attendees ranged from children to the elderly. Cultural brokers (essentially go-betweens) from the immigrant community, whose job is to bridge cultures – and who know first-hand what it is like to make one’s way in a new country – helped prepare those in attendance for their role as hosts. 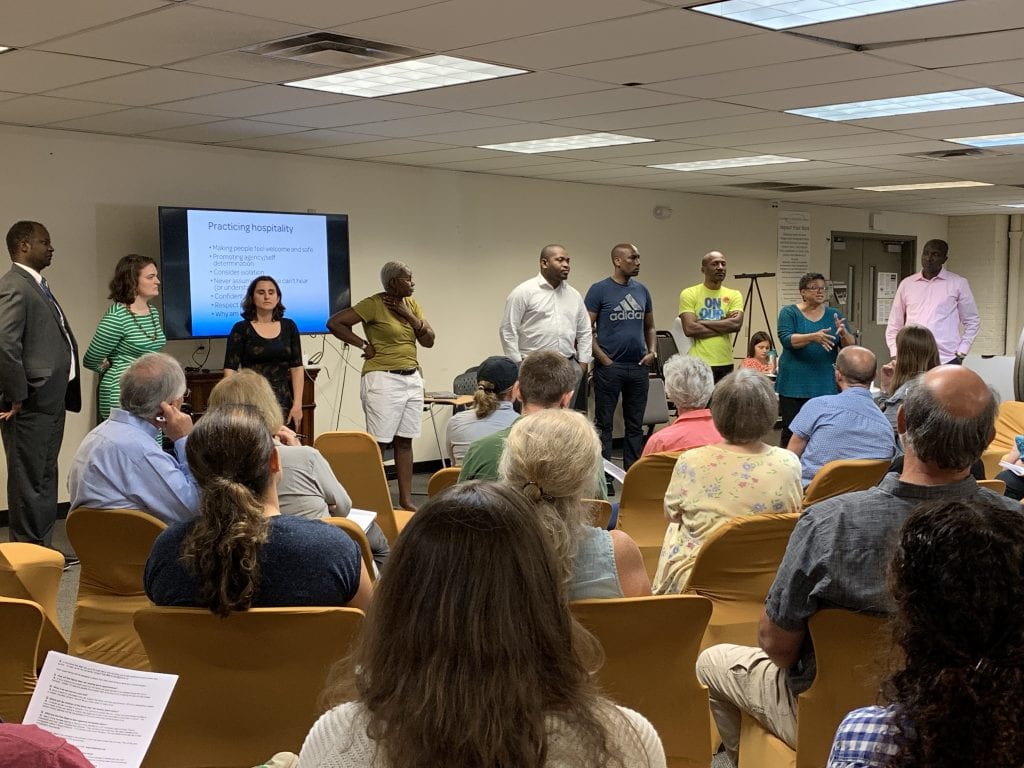 Dialogue between the leaders of the training and attendees

Although initially the effort to find host families focused on the metropolitan areas, in the end, some asylum seekers have been placed in homes further afield – some in rural areas. Mr. Ly pointed out that their guests’ association with the natural world may be very different than those of Mainers. In Africa, forests house animals who can pose a threat to humans. Also, during the journey to the United States, the migrants may have had to traverse the Amazon, or other jungles, on foot. Therefore, newcomers might need take time to be reassured that our rural areas are safe.

Key advice given by all the presenters was to be sensitive to the travails the asylum seekers have experienced. “If they’ve made this journey, most likely they have a lot to recover from,” said Sara Ewing-Merrill of Family Promise of Greater Portland. Courtney Tabor, also of Family Promise, agreed. “They have probably been traumatized in their home country, as well as on the journey to get here.” The consensus was that hosts should listen respectfully if guests choose to tell their story, and avoid asking questions about the arduous journey, the reasons for fleeing, and how their family is doing back home.

“It is re-traumatizing to have to retell the story. We are creating a safe space for these people who have been through so much. If your guests share, just listen – and if intimate stories are shared, keep those to yourself. Their stories are not yours to tell – and especially not to the media,” said Carla Hunt of YCHI. The presenters stressed that any specific stories of individuals that are told to the media could eventually be included as evidence in their guests’ asylum cases, and if errors are made in the re-telling, asylum cases could be jeopardized.

The recent asylum seekers are in the United States legally, however they are not yet at the stage of filing an asylum application. According to Julia Brown, Esq., Advocacy & Outreach Attorney at Immigrant Legal Advocacy Project (ILAP), most of the people who have been living at the Expo are still waiting for their cases to be entered into the immigration court system, and until that has happened they cannot file an application. Once their applications are filed, they need to wait another 150 days before they are allowed to work. Furthermore, because the “Notice To Appear” (NTA) document they were given after crossing the Southern border generally did not list the immigration court in Boston, those now living in Maine must submit a change of address with the Immigration Court so that they receive their hearing notice at their new address. Then they need to file a “motion to change venue” to Boston Immigration Court if their case is not assigned to the right court. The vast majority of families at the Expo are currently at the change of address stage, and not in the system at all yet. This means they do not have a date in Boston court and cannot file their asylum applications yet. ILAP is overseeing the legal process for the newcomers. 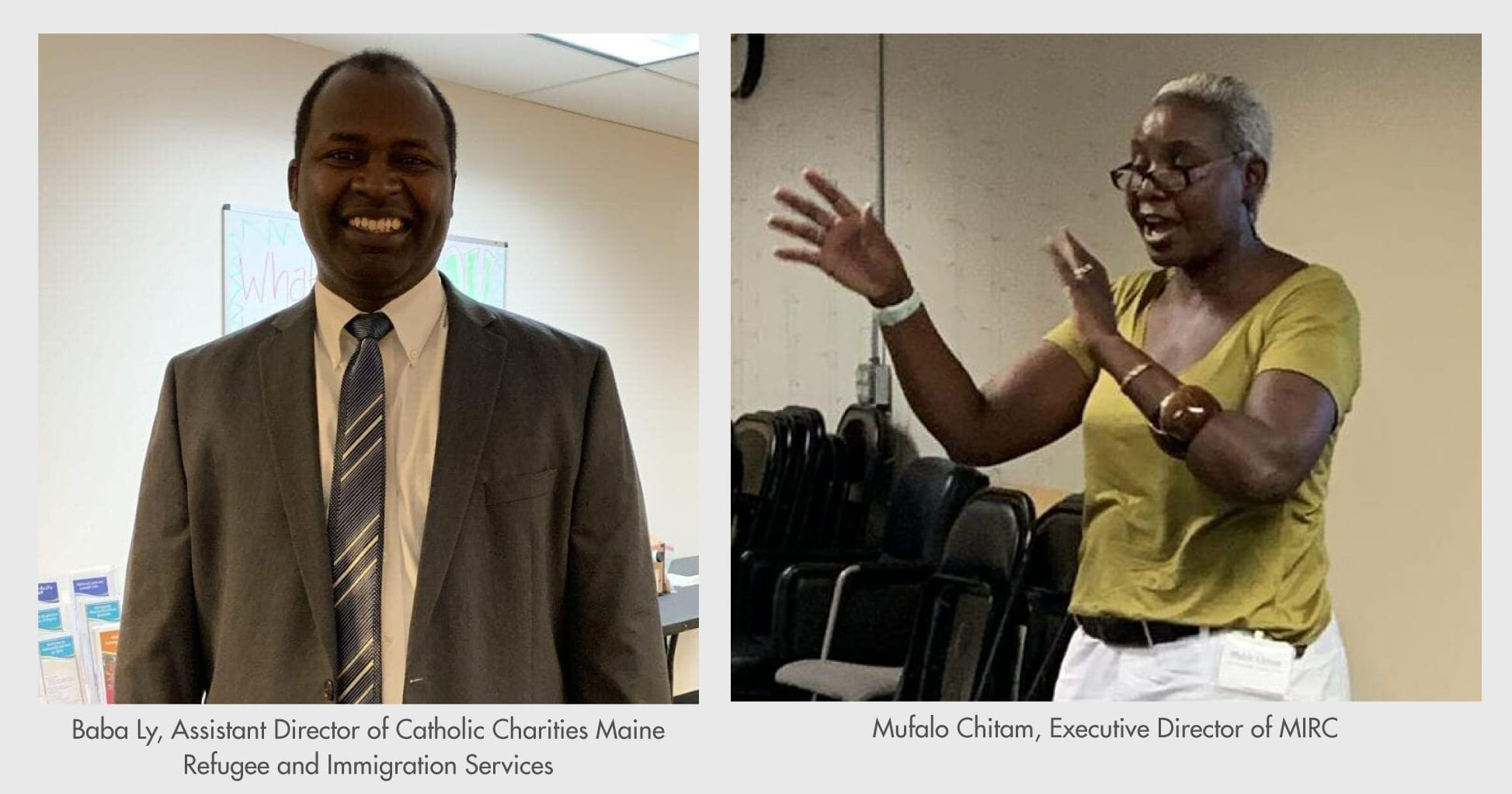 On Saturday, Baba Ly, of Catholic Charities Refugee and Immigration Services, led the audience in a role play designed to help them reflect on aspects of their own culture, in preparation for living with people from another culture. The attendees participated eagerly, and the room filled with the buzz of animated conversation. Afterwards, Mr. Ly helped debrief, and shared some of his cultural knowledge.

“In the United States, introducing yourself by explaining your job is typical – but that’s not true of every culture,” he said. “And we don’t usually talk about economic status here, which is not true everywhere in the world.” Mr. Ly urged hosts to contact the cultural broker assigned to their family for help whenever needed. Above all, he emphasized the importance of “relationship building, which will happen through kindness, openness, and doing your own research about the culture of your guests.” He reminded the audience that they are in a position of power in relation to their guests, and not to be surprised if the guests feel the need to say ‘yes’ to everything they ask.

Nsiona Nguizani, who is working as a cultural broker in Brunswick, said, “It’s hard for the guests to say ‘no’ to you, because of the situation they are in.” He reiterated Ms. Hunt’s comment about the media. “Some people may be trying to stay out of the limelight to protect family back home. Others want to avoid the stigmatization of being homeless – many of these people had good positions back home, and being homeless is hard for their ego.” 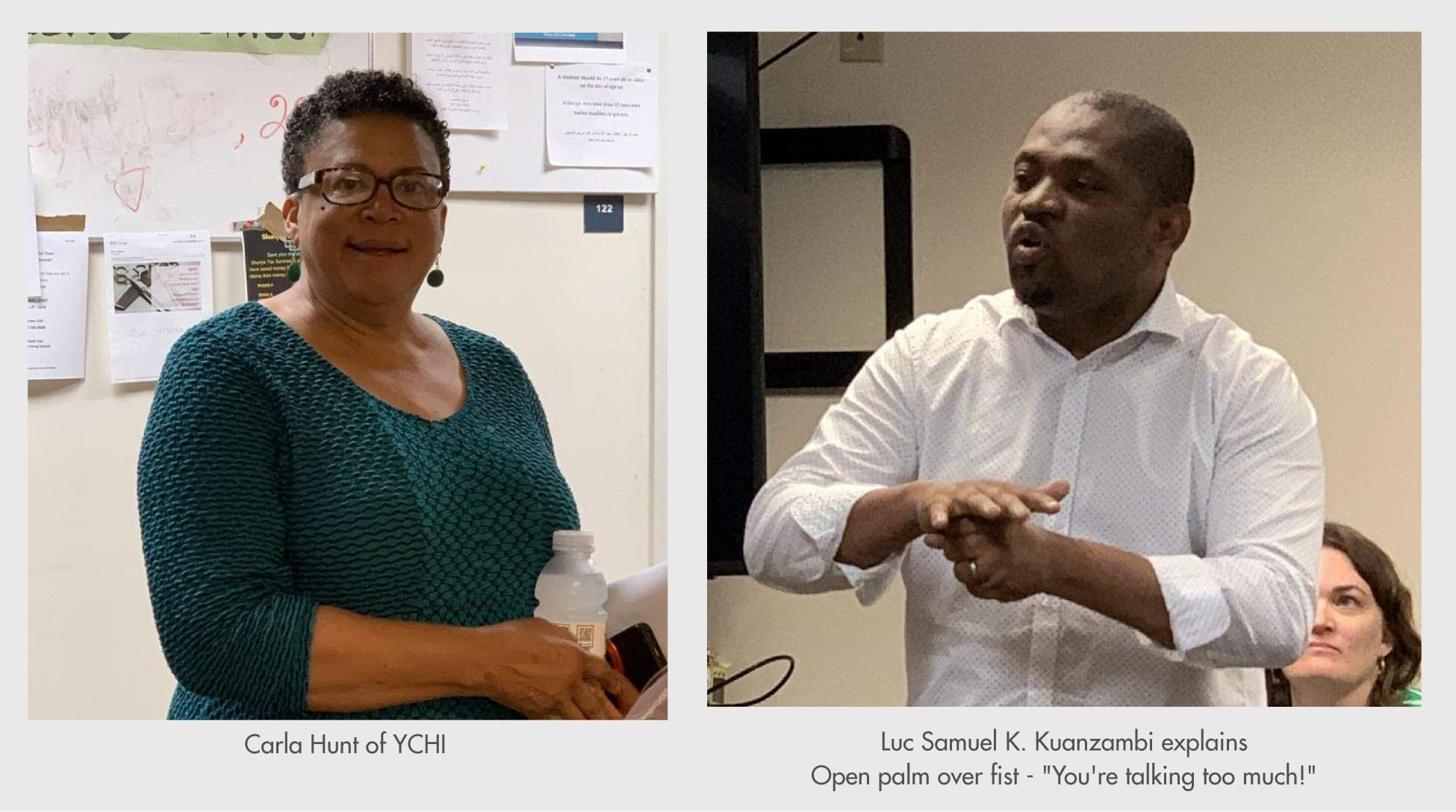 Luc Samuel K. Kuanzambi, lead cultural navigator for CocoMaine, the Congolese Community of Maine, shared the shifting couple dynamic experienced by families who move from Africa to the United States. In Africa, a man is used to “calling the shots,” he said. Here the men find out that children and women have rights. “Nothing has prepared them for the switch,” he said, and emphasized that cultural adjustment takes some time.

Reasons for opening up homes varied among those in attendance. Margaret Minister, from Cumberland, said, “I’m used to having lots of people around. My two kids have left for college, and these people have a need, so …” Gerri Sauer and Russ Cowles, of Durham, explained that they have a basement apartment which has been prepared for use as an Airbnb. Ms. Sauer shrugged. “I felt this was meant to be,” she said. On August 10 they were cheerfully awaiting a home visit from the Council on International Educational Exchange (CIEE), the organization that performed background checks on all those who filled out an application to host, and has handled one on one interviews with all the potential hosts located outside the Greater Portland area. Those hosting in the metropolitan area were interviewed by members of the immigrant leader group. To support host families and guests outside the metropolitan area, GPCOG has started a volunteer driver list for transportation to appointments and for food shopping. 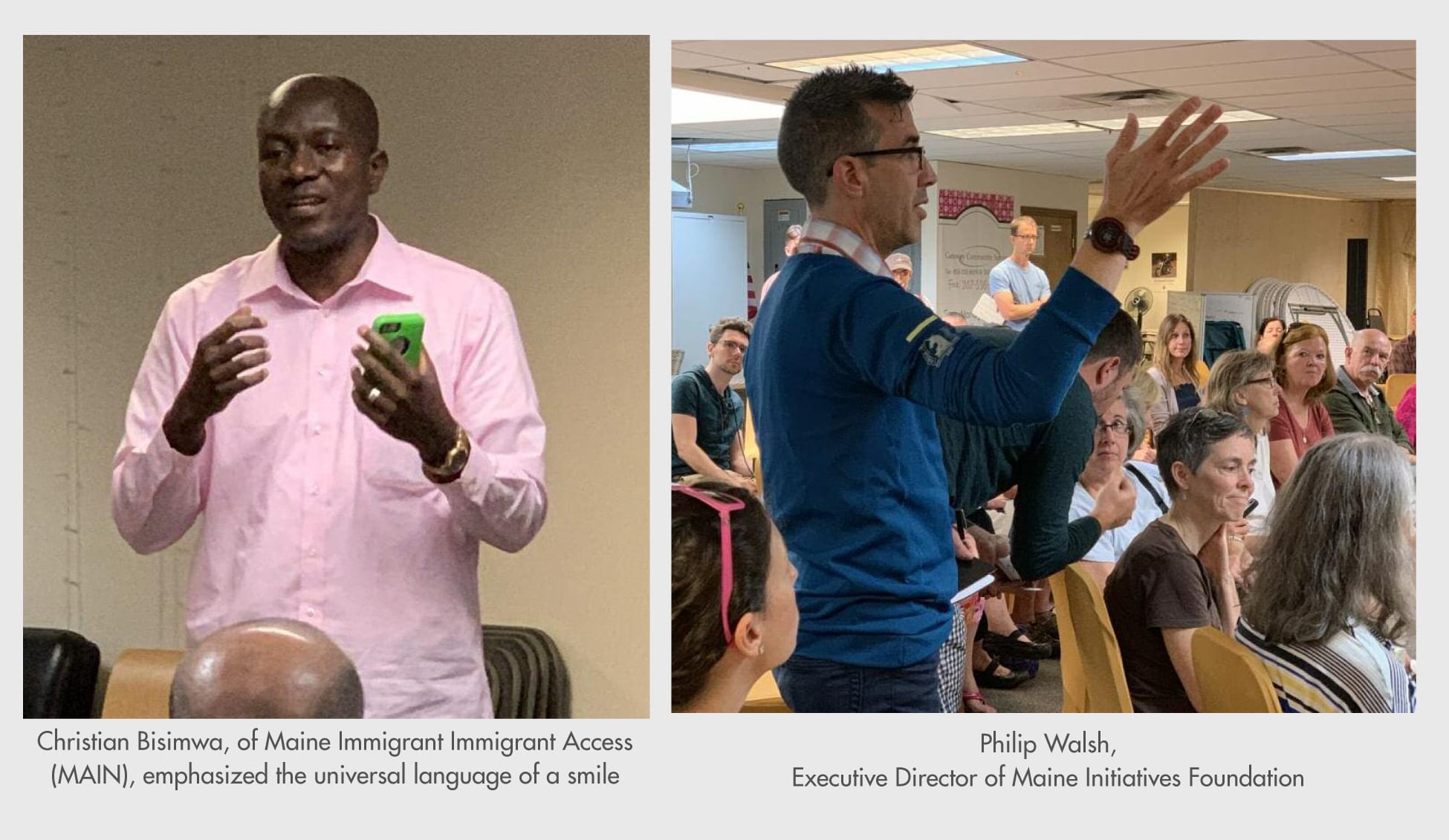 Mufalo Chitam, Executive Director of Maine Immigrants’ Rights Coalition (MIRC), was alerted through a phone call in early June that dozens of African asylum seekers were on their way to Portland. Since then, 437 migrants have arrived.

Ms. McAdoo noted that many people have been working around the clock in a myriad of ways for over two months to welcome the migrants, including by creating the “Host Homes” project as a temporary housing solution.

Ms. Chitam cautioned, “Host homes is a new program. Everything is in process. We ask you to bear with us as we develop resources.” The training ended on a high note, with hosts clustering in pairs and small groups to share take-aways from the session and get to know one another.