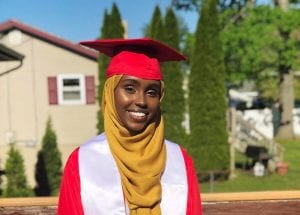 It has been eight years since February 2011, when I landed at Boston International Airport and started my new life – the next chapter in my 11 year-old book – in Maine! I was excited and amazed at the amount of snow on the ground when I arrived. I was also annoyed at how cold it was.
That day was the beginning of a life I would later have a love-hate relationship with. Several months after moving to Maine and getting settled in, my parents enrolled me in a school with kids who were all white, and wealthy. I was extremely anxious. After all, I was a black Muslim girl who was, well, living in a white town. I was unaccustomed to white people, and to wealth, and I was absolutely terrified of how the other students would react to me.
I became the cat in the crowd of dogs. I felt I always had to justify myself, prove what I was capable of. Now it’s 2019, and I still have to justify myself and prove what I can do. Living in Maine meant I had to leave fear behind. I had to get rid of any fear I had. Stepping it up any time I knew someone was belittling me became my habit.
Looking back over the past several years, now that I am a senior, I can say proudly that I have grown and used the challenges thrown my way to my advantage. This year I got the chance to work with the Scarborough Police, with Patrol and the EMTs. As I was growing up, when people asked me what I was planning to study, and I said Criminal Justice and EMT, they were confused. The first thing they would say was, “But you wouldn’t be able to fit in,” or “You’re so small, and you are black. I don’t think that’s a job for you, Hun.”
While I was growing up, I wanted to become a police officer, and I still want to today. When I came to the U.S., I had to bury my dream deep down because everyone always portrayed black people as unable to earn the honor of getting a job like an EMT or a police officer. Every time I said what I wanted to do, it was flat out rejected by everyone. Today I am moving toward putting aside the expectations others have for me, so that I can live my life the way I see fit, which means working toward my dreams.

Maria is a senior at Scarborough High School