Everyone deserves a fair shot at success in an economy that allows all of us to thrive. But the effects of racial bias continue to harm in ways that cannot be ignored.

Publicly available data in Maine paints a picture of economic, health, education, and criminal justice systems that work better for whites than for people of color in our state. These disparities mirror those at the national level.
Research shows us that these race-based outcomes are the result of systemic barriers to success faced by people of color. Federal, state, and local policies throughout our history have created relative privilege for white Mainers while making it harder for indigenous communities, Black families, and other Mainers of color to thrive.
Racial bias has been reflected in policy throughout our history, and is inextricably linked to racial disparities today. In Maine, that history includes efforts to displace and disempower Wabanaki peoples while laying claim to their territories and natural resources. It includes the destruction of the Black and mixed-race fishing community on Malaga Island, where residents were forcibly evicted or incarcerated on specious grounds by the state’s white governor in the early 20th century. It includes a 2011 law that denied Medicaid and other safety net benefits to legally present immigrants. These are just a few of the countless examples.
Because of our nation’s history of discrimination, public policy that does not explicitly address and reduce racial inequality often perpetuates it.
For example, labor laws crafted in the early 20th century were meant to lift all workers with better wages and on-the-job protections. Those laws didn’t mention race, but excluded occupations that were held predominantly by Black workers. As a result, white workers benefitted, and built inter-generational wealth, from a policy that limited opportunities for Black families. The legacy of that history continues to reverberate.
This fact sheet describes what available data tells us about racial inequality in Maine. The findings are evidence that racially unjust systems exist in our state. We cannot create an economy in which communities of color can get ahead without taking a systemic approach to examining the unique, discriminatory hurdles that unjust policies have put in front of some Mainers because of the color of their skin.
We must work proactively to undo the effects of policies that invest in systems that support white families while withholding resources necessary for indigenous, Black, Latinx, and other communities of color.
By focusing on the policies necessary to counter racially discriminatory outcomes and reduce barriers to success in Maine, we can create a state and economy in which each person can fully participate and fulfill their potential. 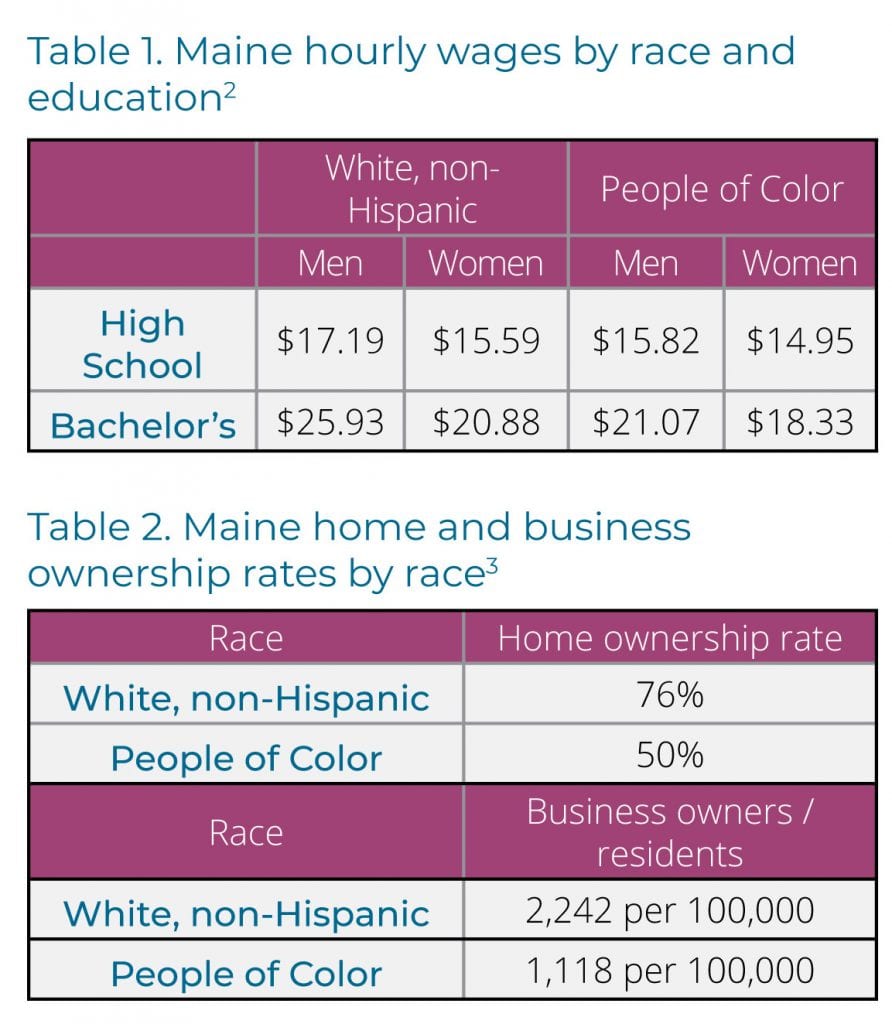 Economic Security
Due to structural and historical privileges such as greater wealth and fewer barriers to higher education, white Mainers are only half as likely as Mainers of color to experience poverty or unemployment.1
Among those Mainers who are employed, white men and women continue to be paid more than men and women of color.
Lower wages and a greater likelihood of poverty and unemployment make it harder for Mainers of color to grow wealth or to become entrepreneurs — as evidenced by the lower rates of home and business ownership compared to whites.

Education
Data about Maine schools suggests white Mainers and Black Mainers have very different experiences with public education. Black students are 2.4 times more likely to be suspended than white students in Maine schools, while white students are 1.6 times more likely to be enrolled in AP classes.4 Structural challenges such as families’ access to resources and the practices and policies of schools may contribute to these disparities.

Health Access
People of color in Maine are nearly twice as likely as white people in Maine to be unable to see a doctor because they cannot afford the cost.5 Greater economic security through higher wages
and educational attainment are linked to improved access to health care. It’s therefore likely that
economic inequality contributes to a lack of health care access for people of color in Maine.

Criminal Justice
Few systems could match the racial inequities present in Maine’s criminal justice system. Black Mainers are 6 times more likely to be incarcerated than white Mainers.6
There is extensive evidence showing that Black people are treated more harshly at every phase in the criminal justice system. They are more likely to be stopped by police, searched, ticketed, arrested, charged, and convicted, and when convicted, face longer sentences