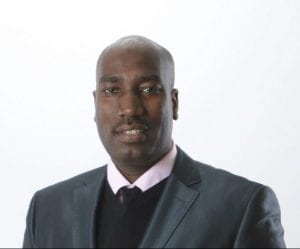 In 1994, right after the genocide against the Tutsis in Rwanda, when conflict was about to roll over into my homeland of DR Congo, I was among the first wave of people who fled across the Rwandan border to seek safety. I stayed for two days in a makeshift shelter in an old school, along with thousands of refugees who had escaped Burundi and DR Congo. We were welcomed by the United Nations High Commission on Refugees (UNHCR), fed beans, rice, and corn, and slept on floor mats.

On June 13, when I witnessed asylum seekers arriving exhausted in Portland after traveling all the way from DR Congo and Angola, my own refugee experience came back to me. I remembered the feeling of not knowing what lay ahead, of being uncertain about  what the future held, and the visceral recognition of our vulnerability as humans. All of this came back to me very vividly, and I did not sleep well that night.

Twenty-five years after my escape from DR Congo, many people in certain parts of Africa are still unsafe. As a result, people continue to flee their homes, many with nothing at all in the way of worldly possessions, or even documents, looking for safety and security. For example, Uganda received over one million refugees from South Sudan in 2016. When lives are threatened, humans do not look back – we run forward, until we feel safe enough to rest and settle down. Conflict and persecution in DR Congo and Angola continue to worsen. So many people are on the run from those countries, looking for a new and safe place to call home. Some of these brave people are now arriving in Maine, and many are housed at the Portland Exposition Center.

Local response toward the recent arrivals is enormously encouraging, with immigrant community members and local community members all offering help on many fronts. Immigrant women have cooked special African meals for the newcomers; immigrants who came to Maine before the current wave, as well as locals who are multilingual, have volunteered their services as interpreters; donations have rolled into the city to help support the asylum seekers; many agencies and organizations, including the Congolese Association of Maine and the Angolan Association of Maine, have stepped up and demonstrated their humanity and generosity to these most vulnerable people who have arrived so unexpectedly in Portland.

World Refugee Day, which is celebrated internationally each year on June 20, honors the strength, courage, and perseverance of refugees, including the several hundred who have just arrived in Portland. According to the UNHCR, there are 68.5 million displaced people worldwide. Burundi, Kenya, Uganda, and Ethiopia are favorite destinations of refugees from the Great Lakes Region of Africa. The number of refugees coming to Maine are a tiny trickle compared to the worldwide problem. Long-term solutions to this international humanitarian crisis must include the establishment of durable peace so that people don’t have to move out of their homelands. Other key initiatives include improving conditions in refugee camps and opening more doors for resettlement.

New arrivals in Maine should be viewed not as burdens and drains on resources, but as resourceful individuals who bring with them many talents and skills that our state needs. Maine stands to gain from these new arrivals, while Africa is losing some of her best and brightest. We should celebrate and embrace these newcomers, and help them integrate into our aging state. Empowering and supporting the newcomers to provide for themselves and contribute to our society is the best course of action in response to the current wave of new arrivals in Maine.