When Dr. Abdullahi Ahmed was a child growing up in a single-mother household in military-ruled Mogadishu, Somalia, he never imagined that one day he would become Co-Principal of an American high school. Yet on April 7, 2020, and in a city halfway around the world, the Portland Board of Public Education unanimously approved Dr. Ahmed’s appointment as Co-Principal of Deering High School. His trajectory from child in Mogadishu to first African-born principal of a school in Maine was long and winding, but in many ways the leader he has become was already visible in the boy he was. 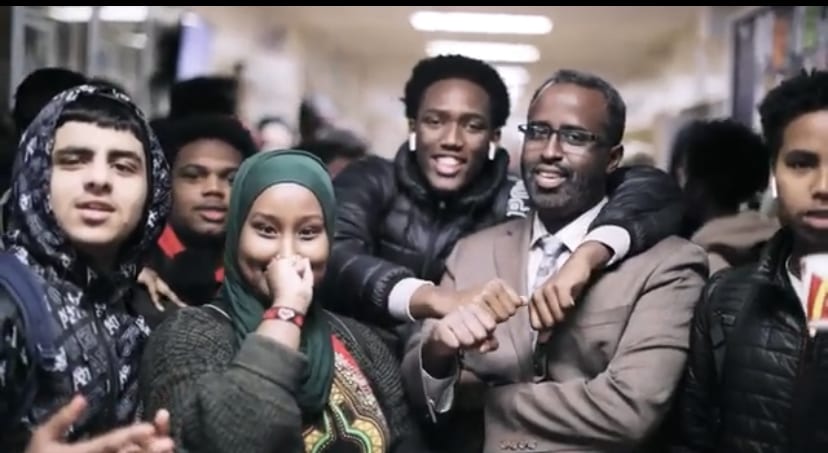 At the age of six, young Abdullahi started school. He remembers his grandmother walking him to school, telling him that one day, because he was getting an education, he would be someone – drive a car, provide food for the family, lift them out of poverty. In Mogadishu at that time, military officers with their insignia and medals were the most powerful people the young Abdullahi knew, and he dreamed of becoming a decorated officer someday. His mother, who had been abandoned by her husband, worked tirelessly to provide for her children. She bought fruits and vegetables in the morning, and later resold them on the streets. Some days, she also bought and sold a little meat. But they were very poor, and the life of an officer looked pretty good to little Abdullahi.

Dr. Ahmed says that poverty drove him to study hard, and that he was able to learn quickly. His mother, who had never been to school, decided he should try for a place in an Arabic school started by Egyptians in Mogadishu. Admission was competitive, but although he didn’t speak Arabic at the time, he was admitted as one of the youngest students. From then on, all his studies were in Arabic. He became one of the top students in the school. When civil war broke out in the 1990s, he and his brother were forced to flee. They became separated and fled via two different trucks. His brother ended up in Yemen, and he ended up in Ethiopia.

“We were not ready for that experience. All of a sudden we were separated,” Dr. Ahmed recalled. Later his brother went on to the Netherlands, and he went to Pakistan. In Pakistan, he was given refugee status by the United Nations High Commission on Refugees, along with a stipend of $30/month, which was just enough to pay for one meal a day. With the help of the former Somali Ambassador, who was also trapped in Pakistan, he was admitted to the Department of Mining Engineering at the University of Engineering and Technology, in Peshawar.

“It was hard to be a foreigner, hard to be a Somali who couldn’t go home because of the civil war, hard to live on one meal a day. It was a very difficult time,” he recollected. However, he met his wife in Pakistan, and earned a bachelor’s degree. Finally, after appeals to a number of different embassies, he and his wife were admitted to the United States in 2000. After arriving in Maine, stints followed in a car parts manufacturing company, a temporary agency, and JC Penny. Then he got a job as a language facilitator at what is now East End Elementary School in Portland.

Kathy Bouchard, who later became assistant principal at King Middle School in Portland, took an interest in Ahmed. She told him, “You seem to know an awful lot of math. You are wicked smart!” Bouchard called Dr. Flynn Ross, a professor in the education department at University of Southern Maine, and when she met Ahmed, she said, “We will help and support you.”

Other positions in education followed. Before becoming an acting Co-Principal of Deering High School last year, Dr. Ahmed had been Maine’s first certified Arabic teacher, a science teacher, a math teacher, an alternative education teacher, and then assistant principal at Deering High School. Dr. Ahmed earned a doctorate in educational leadership from the University of Maine, where his dissertation research focused on refugee parental involvement in schools. He holds a Master of Science in education from the University of Southern Maine, and earned his teacher certification through USM’s Extended Teacher Education Program (ETEP). He also holds a bachelor’s degree in mining engineering from Pakistan. Dr. Ahmed speaks Somali, Arabic, English, and Urdu.

Reflecting on his trajectory, Dr. Ahmed said, “I feel humbled by the opportunity and the access I have had to become who I am. And I feel sad at times at all the suffering I see. Sometimes I get into the weeds and ask, ‘Why me?’ Other times I think, ‘There must be a reason I am where I am.’ I have seen what it is to be at the bottom of the ladder. Now I am seeing what it is like to be mainstream, middle class. I can never pay back those who empowered me, except to empower others now. I am a devout Muslim, and I believe everything happens because Allah wants it to happen. I cannot worship and thank Allah enough. I will make sure to help others.”

Dr. Ahmed has four children – three daughters and a son. One of his children graduated last year from Deering High School, one is a sophomore, one is in seventh grade, and the youngest is 10 years old. In 2007, Dr. Ahmed was able to bring his father to Portland, and then in 2009 he brought his mother. Dr. Ahmed’s father is 87 years old. His mother passed away in 2013.