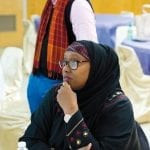 Deqa Dhalac, well-known public figure in the Greater Portland area, and long-time resident of South Portland, will be on the ballot in South Portland’s Special Municipal Election on December 11, 2018. She is running to fill the District 5 council seat vacated by Adrian Dowling.

Serving as an elected public official would be the natural extension of what has clearly been Ms. Dhalac’s life work to date – helping others. She is currently the Intercultural Program Manager for the Center for Grieving Children, where she specializes in working with survivors of trauma. She has been a leader of the Somali Community Center of Maine since 2011, and is currently board president of the Maine Immigrants’ Rights Coalition. She serves as a board member for Maine Women’s Fund, and as an advisor to numerous other boards in Maine.
With two master’s degrees under her belt – one in Social Work, and the second in Development Policy and Practice – as well as extensive professional and leadership experience, and a passion for helping Maine’s children and families, Ms. Dhalac believes she is well-positioned to be an effective, unifying voice on the City Council. She credits Emerge Maine, a non-profit whose Maine chapter is based in Portland, and whose purpose is to recruit and train women to run for elected office, with strengthening her leadership skills, and preparing her for what it takes to run for, and win, office.

Ms. Dhalac emphasizes that what she has learned from social work through the years will be useful on the council. She stresses the importance of civil discourse, and says that setting aside emotion as councilors discuss issues important to their constituents is essential. She notes that a council seat does not belong to an individual, but instead is the ‘people’s seat’. Ms. Dhalac says, “I want to unite people – bring all of South Portland together to work on the issues all residents of South Portland care about.”
Deqa Dhalac reports that District 5 is often referred to by those outside the district as a community of transients, and this has been used as justification in the past for pushing concerns of District 5 citizens to the end of the Council to-do list. She points out that the district is in fact home to a mix of people, some immigrant and some not, and while it is true that some residents are transient, many have lived in their homes for quite a while, some as long as 15-20 years. “Residents of District 5 want to be seen as part of the city,” she said, “with representation in government.”

Ms. Dhalac says that major issues concerning those living in her district are mostly the same as those impacting residents of the other four districts: the environment, jobs, education, short-term rentals, and affordable housing. She notes that Portland Pipe Line plans to appeal the recent decision upholding passage of the “Clear Skies” ordinance to the 1st U.S. Circuit Court of Appeals in Boston, and says it will be important for the Council to fight such an appeal. She speaks about the negative impact of invasive species on the environment and talks about the need to find solutions to protect Maine’s exceptional natural resources. She notes that the city will undoubtedly see ripple effects on jobs and taxes from the loss at Maine Mall of large anchor department stores, and says job creation and protection are essential to residents. She stresses that parents in District 5 need help connecting with the schools their children attend, and that the current education system, while good, needs help stepping it up a notch, in order to provide state of the art tools and skills so graduates can compete internationally. She notes that potholes are a huge issue in District 5, with residents complaining that the roads are worse in their district than elsewhere in the city.

Ms. Dhalac believes in the importance of connecting people and aspires to help unite South Portland’s different groups. “Come see all the cultures we have here! Over 24 languages in the schools!” she exclaims. Originally from Somalia, Deqa Dhalac has lived in the United States for 26 years, and South Portland for over ten years. Raised in an educated family in Somalia, where her father spoke four languages, and she had access to National Geographic magazines, and Reader’s Digest, she learned English in Somalia before fleeing the country.

Fascinated by different cultures from an early age, her living room boasts carvings from Haiti, artwork from Japan, a small Jamaican flag, and elaborate, inlaid, Syrian-made sitting area furniture. She is proud to live in South Portland, and has raised all three of her children in the city. “South Portland is a wonderful place to live,” she says. She takes out her calendar, noting several community events scheduled for the remainder of her Saturday afternoon. So much to do, so little time to do it in. Ms. Dhalac knows that if she wins, she will have her work cut out for her. No stranger to work, however, she believes she possesses the character and skills needed by the City Council. “I want to give back to this community I love so much,” she says, preparing to leave her warm apartment and head into a driving rain. A second later she is out the door, a powerhouse of a woman confronting the elements, looking forward to a win on December 11.