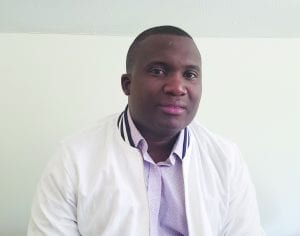 The poem “Song of Lawino” by the celebrated Ugandan poet Okot P’Bitek, from the English for Africa manual, is known to many Africans who study English in Africa. I remember certain lines, such as “My clansmen, I cry – Listen to my voice: – The insults of my man – The insults of my man – Are painful beyond bearing…. He abuses me in English – And he is so arrogant….I do not understand – The way of foreigners – But I do not despise their customs….”

The poem depicts Lawino, a village wife left behind by a man who has gone off to school and been Westernized, and who eventually marries Clementina, who can dance like a European and behave like the colonists. Lawino sings poems to remind her former partner of his African roots, and to let him know that he does not have to betray those roots.

One day, after I moved to the U.S., when I was returning home from work, I ordered my favorite latte from Dunkin’ Donuts. The teller asked me to repeat my order. I repeated myself loudly: “a MEDIUM HOT LATTE WITH WHOLE MILK.” She processed my request quickly, and it was a well-made latte, but as I was draining the last drop of coffee, I thought, “How bad can my pronunciation be that I can’t even say ‘Medium Hot Latte’ like an American?” Sometimes I feel as though I should check my vocal chords, just to make sure there is nothing that prevents me from pronouncing my words as well as white native speakers.

I estimate that my orders for coffee are correctly processed only four out of 10 times, and the closer I am to the vendor, the more likely I am to be heard correctly. So I prefer to be called up to the window when I order my coffee (unlike many Africans, my morning is graced with hot or iced coffee, depending on the weather). Far too often, my coffee is served without sugar, iced instead of hot, with skim milk instead of whole milk, or with a toasted croissant stuffed with cheese when I ordered plain. I am not a complainer, but although I have tried many times to rehearse how to quickly say “MEDIUM HOT LATTE WITH WHOLE MILK,” the problem remains.

I think part of the problem is who is listening to me, and how far they are willing to go to understand non-native English speakers. Dear Native English Speakers, please take a little time and listen carefully to people who speak with unfamiliar accents. The gestures and pantomime we use might help. Albert Einstein once said that if you judge a fish by its ability to climb a tree, it will live its whole life believing that it is stupid. We ought not to judge people and tailor the service we give them based on the accident of their birth. I have known many Americans who know a second or third language. They feel great about their skill, and don’t complain about the accents of others, because they know how hard it is to speak like a native. My colleague at work is learning Swahili and Kinyarwanda – I see how proud she is when she practices it with me.

And if someone speaks English with an unusual accent, and you don’t understand, please don’t pretend you do. I have been in meetings where friends said “yes” just to please me, only later to realize that they did not understand what I was saying. I wish everyone would make an effort to understand those whose accent is not that of a native speaker. And I am fine with asking for a pen and paper to write down whatever I was saying that was not understood – I feel happy to be able to communicate.

I want to know that my American friends find interest in getting to know their new neighbors from Africa, and elsewhere – not as people who can’t pronounce words correctly, but as people with rich cultures and languages of their own. Many videos have gone viral on social media showing white Americans harassing people who speak Spanish or other languages while they are in the U.S. To me this is nonsense– and hopefully against the values of most Americans. In my culture, the guest is treated as prime time. One of our proverbs is,“Umushyitsi muhire akurisha ikivuza,” which means that a distinguished guest prompts you to cook whatever you have, even if it is just seeds, to make sure that they feel welcome (usually you can eat the whole crop – but you cannot touch the seeds).

In our English for Africa manual, we read a story about “Professor Ology” – a white professor who was the first to set foot in an African village. With no bridges or roads, he asked an African boy to take him across the river in a canoe. Halfway over, he asked the boy to discuss marine biology. The boy said he didn’t know anything about biology, so the white man asked about geology, anthropology, and zoology. The boy replied that he did not know anything about them, either. The white man laughed loudly, questioning the boy about how he could be alive without knowledge of those disciplines. Suddenly, the canoe hit a rock, and sank. The two struggled to swim across the crocodile-infested river. When the boy arrived on the opposite shore, and looked back, the white professor was crying for help as he drowned. The boy shouted, “Professor – tell me – do you know anything about swimology…?”