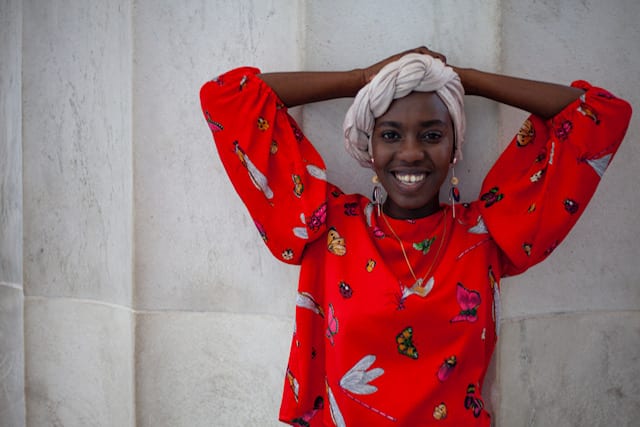 On Tuesday, March 24, 7 PM, at the Curtis Library, Brunswick, Maine, the Justice for Women lecture series, Gulf of Maine Books, and the Curtis Library will host “Daughters of Darfur”, an evening of poetry and conversation with. The event is free, and open to the public.
Each year the Justice for Women lecture series organizes a series of talks and workshops “bringing global voices to the people of Maine”. This year’s speaker is Emtithal Mahmoud. Born in Sudan, Emtithal and her family moved to Yemen, and then to the United States. Emtithal graduated from Yale, where she studies anthropology and molecular biology, and participated on the Yale slam poetry team. In 2015 she was the International Poetry Slam champion, and in 2016 she was co-champion of the Women of the World poetry slam. In 2018 Emtithal was named a United Nations High Commission on Refugees Goodwill Ambassador. The BBC named her to their “100 Women list” of the most inspirational women across the world.
Emtithal has spoken and read poetry in Oslo, Stockholm, the Hague, Brussels, Paris, London, and more. She has recited poetry in front of the UN General Assembly and has met with the Dalai Lama. For the United Nations, she has traveled to meet with refugees in Jordan, Uganda, and Lesvos, Greece. She walked from Darfur to Khartoum in 30 days, leading a “One Woman Walk” to raise awareness for peace, giving readings and talks along the way. Thousands of people joined her in walking for peace. She says:”If we can walk together, we can work together. We can create and inspire a collective responsibility for peace. We will bring the peace together.”
In 2018 Emtithal published her first collection of poems: “Sisters’ Entrance”. She says that her poetry expresses the real emotions behind the headlines. “It’s hard, in our world, when you see violence everywhere- you’re desensitized to it. What I try to do is to change the approach, so it helps people feel that it’s OK to feel again, and to recognize that it’s scary, and it does hurt, and it’s OK to cry. And people do cry…A lot of things are said about people like me – young people, black people, Muslim people, women – The reason I perform is to answer those things, to be a voice I didn’t really have growing up.”

Joining Emtithal for the evening will be Maine poet Ekhlas Ahmed. Ekhlas and her family fled the civil war in Sudan, resettling in Portland in 2004. Ekhlas attended the University of Southern Maine, earning a bachelor’s degree in Internationa Relations and a master’s degree in Education. She is the vice-president and co-founder of Chance to Advance, a nonprofit organization raising awareness of the violence in Darfur and the needs of the people there, as well as implementing initiatives to make education more feasible for all. She is working on a book called “The Bridge Between”, an autobiography in poetic form about her experiences in Darfur.